The Other California: Waiter! There's A'a in my Pahoehoe!

Medicine Lake Highland is one of the finest places in California to compare and contrast volcanic landforms, lava flows, and pyroclastic debris. The volcano has erupted a complete range of different lavas in the last few thousand years, from silica-poor basalt to silica-rich rhyolite, resulting in the presence on the mountain of practically every kind of volcanic landform: a shield, cinder cones, plug domes, a caldera and tuff cones. And every kind of lava flow....

Today we are looking at basalt flows. Basalt can be highly fluid (non-viscous), forming smooth-surfaced flows that ancient Hawaiians compared to shark skin. When such lavas flow over edges, they form structures that look like coiled rope, as seen in the photo below. These are called pahoehoe lavas ("pa-hoy-hoy"). I have to admit I took the photo in Hawaii on the 1974 Maunu Ulu flow, not at Medicine Lake. As many times as I have visited Medicine Lake Highland, I have failed all those times to simply look down and take a picture of some pahoehoe lava... 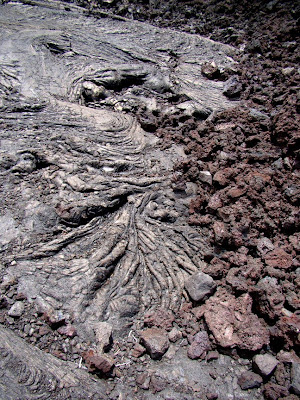 As the lava cools, or if it has a different gas or silica content, the basalt lava can become more viscous. As it flows, it crusts over and the unstable surface breaks up repeatedly into an uneven rubble, even as the interior remains hot and molten. The Hawaiians called these a'a lavas ("ah-ah"). Some a'a is visible on the right side of the photo above, and fills the picture below. This shot is the Devils Homestead Flow in Lava Beds National Monument on the north flank of Medicine Lake Highland. It erupted around 12,000 years ago from an area in Lava Beds called the Fleener Chimneys. 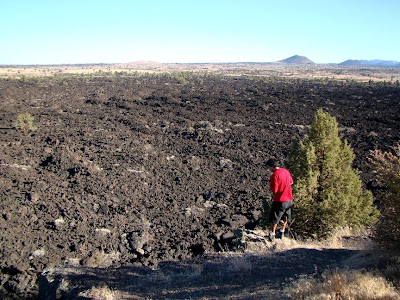 The youngest basalt lava in Lava Beds National Monument, the Callahan flow, originated at Cinder Butte just south of the monument only about 1,100 years ago. A small quarry (below)reveals a cross section of an a'a flow, with the rubbly base, a solid interior, and the rubbly surface (a sketch map showing the location of Cinder Butte and the Callahan flow can be found in yesterday's post; it's a narrow dirt road, but accessible to cars with reasonable clearance). The barren surface of Cinder Butte is a wonderful example of a young cinder cone, formed as small fragments of lava (cinders) were explosively ejected from the eruption site. 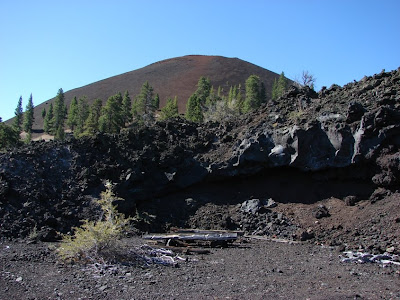 A'a and pahoehoe flows can show transitional forms. In the photo below, from Black Crater in Lava Beds, the pahoehoe surface was beginning to break up as it congealed, forming slabby pahoehoe. This particular flow is probably only a few decades older than the Callahan Flow. 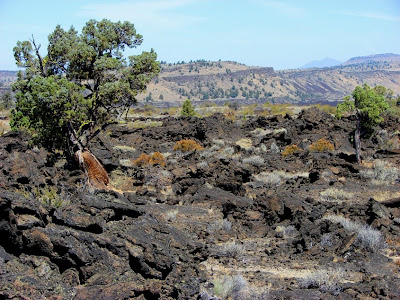 Medicine Lake Highland also has silica-rich rhyolite lavas. We will explore these in the next post.
In the interest of full disclosure, I stole today's title quip from an absolutely fantastic DVD called Lava Flows and Lava Tubes which is one of the best movies I have ever seen illustrating the dynamics of lava flows. It intersperses active Hawaiian flows with volcanic locales across the western United States, including Lava Beds. If you are curious about lava flows or are a teacher, it is a great resource.
Posted by Garry Hayes at 7:09 PM

A'a how the lava flows, and pahoehoe to you too.

I liked the crunching sound while walking on the pahoehoe at Lava Beds.