A Tale of Three Quakes 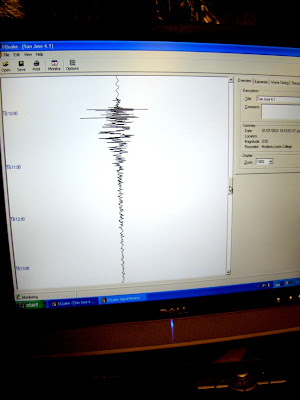 There have been a number of earthquakes in the last week, some benign, and one an unfolding tragedy. I want to use my lab recordings of three quakes to make a point about the magnitude scale. The first recording, above, was a little 4.1 shaker on January 7 in the San Jose area, about 50 miles from my lab in Modesto. It just barely reached the threshold to be recorded on my unit. No damage was recorded. 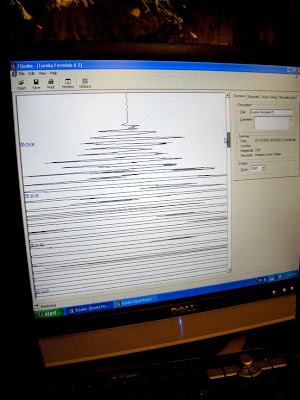 The more serious California quake was the 6.5 magnitude event offshore of Eureka and Ferndale in Northern California. The magnitude scale is exponential, in that the energy release increases by a factor of about 30 for every number on the scale. A magnitude 6 quake is 30 times more powerful than a magnitude 5, and 900 times (30x30) more powerful than a 4. Therefore, the Eureka event was over a thousand times more powerful than the San Jose event. This shows on the seismograph record above: the recording was offscale for nearly 10 minutes, and waves recorded for over an hour (about four minutes are recorded on each screen shot). This was despite the fact that the quake was several hundred miles away from the seismometer. Eureka and the other communities suffered some minor damage, but few injuries have been reported. 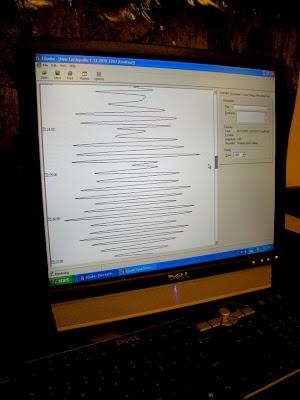 Today's 7.0 magnitude quake in Haiti is a far more serious matter. It was several times larger than the Eureka event, and was centered beneath a crowded urban center where architecture standards are far less stringent. Preliminary reports are not sounding good, and prayers are probably in order for the people who live there. It's not like bad things haven't been happening to Haitians over the years. Even though the event was thousands of miles from my lab seismometer, it still was nearly off-scale, and the shaking lasted more than an hour.
It was a striking introduction to geology for my students, who were sitting down for their very first laboratory section today when the waves arrived from the Haiti event.
The recording unit is a simple lab seismometer that I got from Ward's Scientific about 15 years ago for around $3,000. It has done a fine job of catching most of the significant events (magnitude 7) around the planet, and most of the magnitude 4 and 5 events in California.
Posted by Garry Hayes at 4:48 PM

This is fascinating, Garry. Thank you for posting this information. I moved to Modesto a year ago from the Imperial Valley where we have regular earthquakes. There is controversy that the geothermal plants, especially around Mexicali, are in some way causing or contributing to earthquakes. Do you think that could be so? Gene Hill, MJC Foundation, hillg@mjc.edu

Like Gene Hill, I too am so amazed that this tech. exists. Thank you sooo much for sharing. I am also concerned that geo. therm. planetary exposure is adding to the shakes. OUR Earth is alive, we should respect it, North America is responsible for harming the waters, soil, air, and that's only to name a few of the environmental doings (down South). No blame but am questioning and searching for a better way.
We learn from eachother, do tell.
Angie Garcia, MJC. garciaan@mjc.edu