The Other California: A Land of Fire and Ice (but mostly ice today) 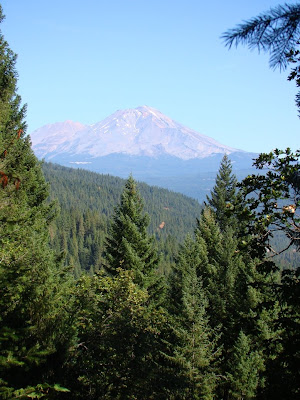 I'm breaking my own rules here. My latest series is exploring the places in California that aren't on the postcards, but are worth a visit. The thing is, Mt. Shasta is one of the most familiar sights in the state of California. The gigantic stratovolcano, the largest of its kind in the Cascades Province (and one of the largest in the world) reaches an altitude of 14,162 feet, and can be seen from over a hundred miles away in some directions. It's on a lot of postcards. But most people see the volcano on their way from California to Oregon along Interstate 5, and in doing so have a hard time seeing one of the most remarkable things about the volcano that isn't volcanic.
California, the sunny, mostly arid, almost semi-tropical state is not known for its glaciers, but it most certainly has them. The Sierra Nevada has between a dozen and several dozen glaciers, depending how one defines them. The largest Sierra glacier lies beneath the peaks of the Palisades, and is a mile wide and half a mile long. But farther north, Mt. Shasta has at least seven, including both the longest, and the largest glaciers in the state. They are most easily seen from viewpoints along State Highway 97 between Weed and Klamath Falls, Oregon. 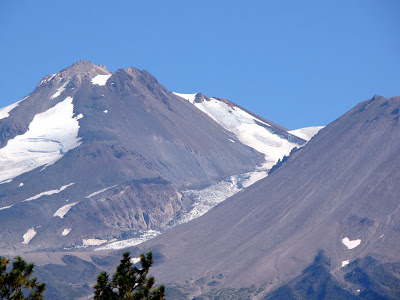 Whitney glacier is the longest glacier in the state, with a length of about two miles. It is also the only valley glacier in the state. It zigs, then zags down the center of the photo above. Most all the other glaciers occupy the cirques at the head of glacial valleys. Whitney displays many classic glacial features, including bergshrunds, ice falls, crevasses, and moraines. 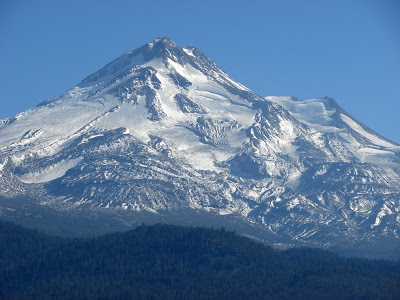 Whitney is the longest glacier in the state, but it is fairly narrow in its valley. The honor of the largest glacier in the state is nearby Hotlum Glacier, which coats a slope on the northeast flank of the volcano. It is about 1.3 miles long and 0.7 miles wide. In the picture above, Hotlum can be identified from the rounded cracks (the bergshrund) on the left flank of the volcano. Bolam Glacier is in the center of the photo, and bits of Whitney are on the right.

The glaciers of Shasta have a unique distinction: they are one of the few glaciers in the world that are actually growing in size. Before any global warming deniers get excited, the growth is actually a consequence of the rise of world temperatures. Warming of the northern Pacific is causing an increase in evaporation, and is increasing the amount of precipitation on the mountain. The increase of snow is able to offset the loss of ice due to melting during the 1.8 degree Fahrenheit rise of average temperature in the region over the last century. Continuing increases in global temperatures will eventually overwhelm the glaciers, and they will most likely be gone in a century or so.
See them while you can!
Posted by Garry Hayes at 12:24 AM

after yosemite - mt shasta area is my husbands favorite place in calif. while living in calif my husband would go to that area every sept for at least 2 weeks.

hello, I'm an italian student of geology, your blog is very very interesting! good work :D
and the pictures are amazing!!

I love that view of Shasta from Hwy 97.