The Other California: If a Tree Falls in a Forest, Will, uh...If Lava Knocks Over Tree in the Forest...? 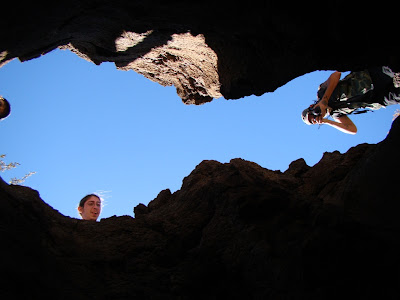 Lava has a well-deserved reputation for destroying everything in its path, not to mention melting human beings and chasing movie heroes. What really happens when lava flows into a forest? When I traveled in Hawaii, I found out that trees actually do persist, temporarily, as the lava flows through. The trees cool the lava enough to freeze the liquid, and then the tree burns, leaving behind a gap in the shape of the tree: a tree mold.

Hawaii has a great many tree molds, but California is not totally bereft of examples. One good place to see them is on the Medicine Lake Highland, California's biggest volcano. About 12,330 years ago, a minor basaltic eruption took place just north of the caldera rim. It flowed through a Western White Pine forest for a few hundred yards, and ended. In most places the basalt was no more than 10-20 feet deep. The doomed trees burned, but the molds remained (the charcoal from the burned trees provided the material for radiocarbon dating. The molds are 10-15 feet deep, and several are big enough to climb into (see the photo above). 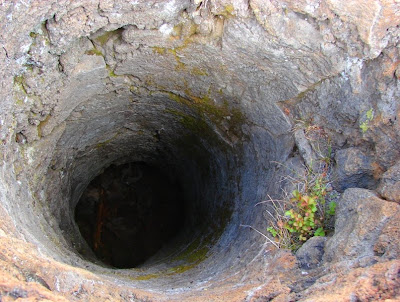 Snow reportedly remains in the molds for much of the summer. Bark patterns and branches are also preserved; in the photo below, a person can reach into both holes and clasp their hands about two feet down in the rock. 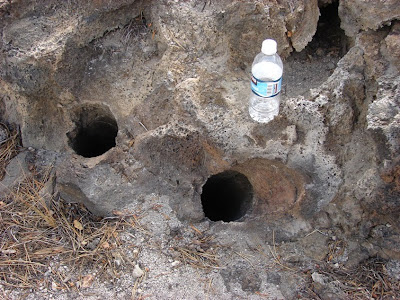 The molds can be seen on Forest Road 49 about 10 miles from park headquarters at Lava Beds National Monument, and 6 miles from Medicine Lake (see map below). 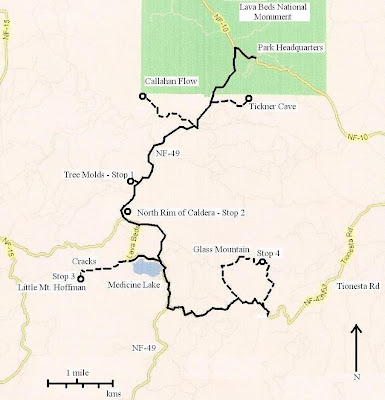 The first time I saw tree molds was on the south side of Mt St Helens. It's so amazing to actually see the bark textures and where roots sunk deep in the ground. Some molds were from trees laying on the ground and can be crawled thru.