The Other California: A Mystery Solved, and One of the State's Prettiest Little Waterfalls

Monday's post was a bit of mystery, in that a dry channel turned into a rushing stream in less than a half mile. The answer is sort of mundane, but quickly leads into the story of one of the finest, most attractive waterfalls that I know of. It's on a lot of postcards, but I don't think many visitors from outside of the state know much of it. Welcome to McArthur Burney Falls State Park, the second oldest state park in California.

At the hard to define boundary between the Modoc Plateau and the Cascades provinces, basaltic lava flows are interspersed with lake sediments, and a series of fault lines cross the region. Basalt lava contracts as it cools, forming numerous fractures and joints that provide an avenue for surface water to sink into the ground. Consequently, streams and rivers can disappear and reappear in unusual places, sometimes in spectacular manner. Some of the largest springs in the country are found nearby (At Fall River Mills, a group of springs have flows of around 1,400 cubic feet per second, an instant river). Another spring rises on the Burney River (below), forming the river of our little mystery. It's what happens just a short distance downstream that makes this place special. 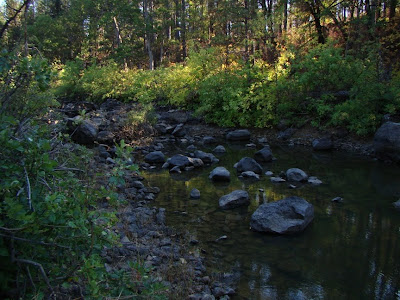 The water spills over a 129 foot edifice, which in a state that has dozens of high waterfalls might seem insignificant. 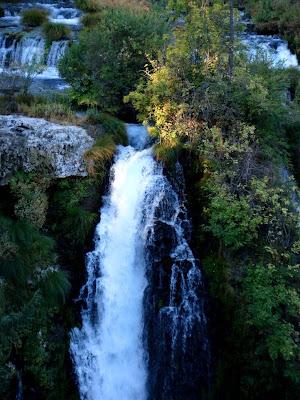 From farther back, we see that the water splits into two channels, but we also see that something is going on below the rim. Some of the water is coming is flowing out of the cliff face itself. In fact, a lot of it, perhaps more than is spilling over the edge.
The lip of the fall is a basaltic lava flow. The rock beneath the cliff is much softer, consisting of clay-like diatomite and volcanic breccia. The groundwater can't sink through the underlying layers, and is forced to the surface just under the basalt rim. It makes for a unique sight. 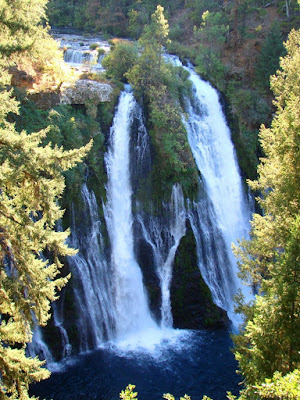 A short trail descends to a deep pool at the base of the falls, and provides another perspective. The amount of water is stunning. The flow of groundwater at the falls is far less affected by seasonal differences in precipitation, so the discharge remains fairly constant all year. If you are visiting California in the late summer, McArthur Burney is a dependable place to see flowing water. 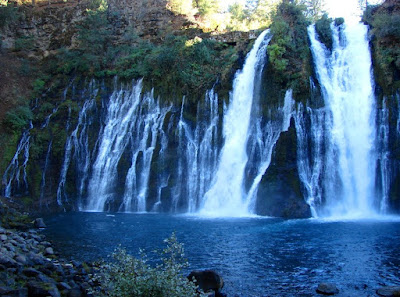 My only (mild) complaint about the falls is that the basin opens to the north, so the sun doesn't shine on the falls much, except maybe mid-day (when I never seem to be present). Photographers do pretty well catching rainbows in the spray rising over the falls, but at the base, pretty much everything is in the shadows. It's a cool place to be on a hot day, but difficult to photograph (at least for amateurs like myself)! 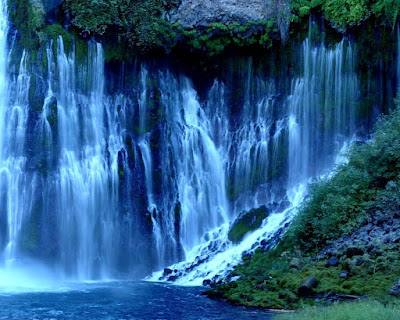 The park offers a nice campground, incredible fishing, and a nice network of hiking trails (the Pacific Crest Trail passes through the park). Information can be found in the park brochure. The California state budget crisis threatens the park's future. For info on how you can help out, check out the California State Parks Foundation. The parks don't deserve to be constant budget footballs; please get involved!
Posted by Garry Hayes at 9:37 PM

Thanks for this series, it is fascinating.

Hi Professor, look what I found!
This is so cool =)