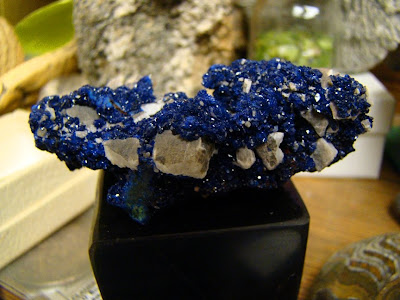 I've noticed some deskcrops on the geoblogosphere of late, and since I missed one of the early Accretionary Wedges on the topic, I want to "show and tell" some of my deskcrops too. Geologists are notable hoarders and collecters of shiny objects (not unlike crows and packrats), and our desks and workspaces get cluttered quickly. My most treasured single item is a highly crystalline sample of azurite, one of the ores of copper. I'm a sucker for deep blue... 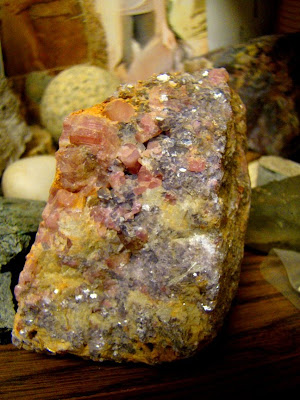 Decades ago in a different job, I was tasked with cleaning out a bunch of old senior exercises in a basement storage area, and a lot of rocks got tossed. This one caught my eye, though, because of the color. The pink crystals are the gemstone tourmaline, and the lavender flakey crystals are a form of lithium-bearing mica called lepidolite. My best guess is that it came from one of the mines in the San Diego region of southern California. 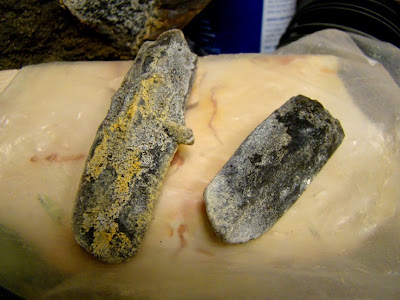 Some deskcrops are not eye-catchers, but have special significance. These bladed crystals are samples of anorthoclase, from the pool of lava on at the summit of Mt. Erebus in Antarctica. It was collected by a researcher who spoke at our campus a few years ago, and was kind enough to donate the samples to the department. 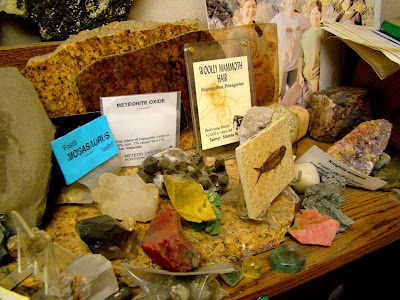 It was kind of hard to choose my favorite deskcrops! The photo above is about a fifth of the total space on my desk, and the rest is similar to this. Books? Not so much. That's what bookcases are for.

The Azureite is very pretty Professor!