So we begin our exploration of Medicine Lake Highland, California's biggest volcano. As noted in a previous post, it is essentially a basaltic shield*, about 30 miles long in a north-south direction, and 22 miles stretching east-west ("stretching" is a particularly apt term in this instance). Starting from the plains of the Modoc Plateau at about 4,000 feet, the volcano rises to a high point of 7,913 feet above sea level. 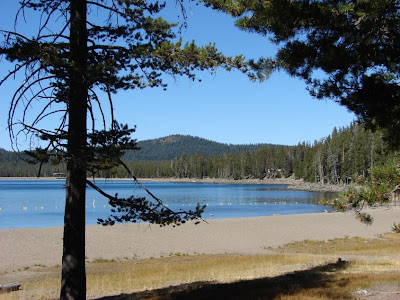 The summit region on the volcano is a basin just over seven miles long and 4 miles wide, containing Medicine Lake itself (about 0.6 by 1.2 miles, and up to 143 feet deep). The basin formed when eruptions emptied the magma chambers beneath the volcano, causing the summit area to collapse inwards, forming a caldera. Crater Lake (over the border in Oregon) is a similar-sized feature, but it formed more recently, and far more catastrophically (a single devastating explosion rather than a series of eruptions over time). The caldera at MLH is topographically indistinct, having been modified by subsequent eruptions, and shaped by glaciation.

The volcano has been producing lavas for less than a million years. They are generated in the mantle as east-west stretching of the crust has caused numerous normal faults to form, providing a conduit for the basaltic lavas to reach the surface. A certain amount of mixing and other chemical interactions occur in the crust as lavas rise, causing some magma chambers to change composition. Many of the younger flows on the volcano are rhyolite (in the form of obsidian and pumice) and gray andesite. Comparatively speaking, Medicine Lake Highland is one of the most active volcanoes in the western United States. It has erupted hundreds of times during its growth, with at least nine eruptions in the last 5,200 years, with the most recent only 950 years ago.

The Cascades Province extends from northern California to British Columbia, and includes some of the most famous volcanoes in the world, including Mt. St. Helens, Mt. Rainier, Mt. Hood, and Mt. Shasta, and Lassen Peak (the last two being California's best-known volcanoes). The volcanoes derive their magmas from the melting of rock in the Cascadia Subduction Zone, where the oceanic crust and upper mantle of the Pacific Plate Juan de Fuca and Gorda plates are being driven beneath the North American Continent. The magmas are primarily andesitic in nature, forming a type of lava that is capable of explosive, devastating eruptions. The explosion of St. Helens in 1980 and the formation of the Crater Lake caldera around 7,000 years ago provide vivid examples.


The Modoc Plateau is less familiar. Sparsely populated and relatively flat, the region is mostly "drive-through" country, unless one is looking for an interesting geologic story. The oldest rocks of the Modoc Plateau are the basalt flows of the Cedarville series, which are best exposed in the Warner Mountains on the eastern edge of the province near Nevada. The rocks are several tens of millions of years old (Oligocene to Miocene). Subsequent faulting disrupted the crust, resulting in the formation of fault grabens and lake basins, including those containing Klamath and Tule Lakes (see the diagram above).

I will be writing about some of the unique sights on the highlands in coming posts, but if you can't wait and want some great online resources, check out the following:

A USGS geologic road trip through the region

Information from the Cascades Volcano Observatory on the Medicine Lake Highland

*UPDATE: A definitional thing here: the latest research, sourced below, describes Medicine Lake Highland as a "shield-shaped" edifice that can be better described as a "composite volcano" or "central volcano". This follows from new revelations about the interior of the volcano, which is more silica-rich than expected, and not primarily basaltic. I'm going to continue to call it a shield, based on the geomorphology, with full recognition that it is quite unique, and certainly not all that much like classic shields such as those in Hawaii. Thanks to Forrest for the heads up!

Paulina Lake and Medicine Lake are both very similar in the ways that they formed, on volcanoes that are essentially twins in their origin

Hi, great article!
I plan to visit the area soon.
I noticed a minor error here:

"The volcanoes derive their magmas from the melting of rock in the Cascadia Subduction Zone, where the oceanic crust and upper mantle of the Pacific Plate are being driven beneath the North American Continent."

It's actually the final remnant of the Juan de Fuca plate that is being subducted under the North American plate in the cascades region.

The Pacific plate is heading northwest, sliding past the North American plate...

Thanks for the correction, as usual I was writing fast and sloppy!