The Other California: Lassen Peak, A Volcanic Afterthought...

Getting back to our exploration of the "Other California", those places in our wonderful state that don't always show up on the postcards, and aren't the usual tourist destinations. I break my own rules every so often, and end up visiting a popular or well-known place, but only to emphasize things that a weekend tourist might miss on a quick run-through. Such is the case today, with a visit to Lassen Volcanic National Park. The park's centerpiece, Lassen Peak, was perhaps more famous among geologists prior to 1980, when it reigned as the site of the most recent volcanic eruption in the lower 48 states. The eruption, from 1914 to 1917 (with a little puff in 1921) included lahars (volcanic mudflows), pyroclastic surges (explosions of hot ash), and a lava flow; in short, all the things a textbook writer would want to describe. One added benefit: it didn't kill anyone (although there were a few close calls). Those of us who had our first geology class before the St. Helens eruption in 1980 learned our volcanoes from the example of Lassen Peak.
Truth be told, Lassen Peak doesn't look much like a volcano. It is a miniscule peak compared to Mt. Shasta (1/2 cubic mile compared to 108 cubic miles). Although it tops out at nearly 10,500 feet, it rises off a plateau at 8,000 feet and thus is only a little more than 2,000 feet tall (Mt. Shasta rises more like 10,000 feet from its base). Visitors looking for a classic-looking symmetrical cone surrounded by lava flows will be disappointed. Lassen is a plug dome, composed of extremely viscous dacite-rhyolite lava. It erupted about 27,000 years ago by squeezing out of the ground in a manner not unlike toothpaste. Although it is a small volcano, for a plug dome it is huge; by most reports it is the largest of its kind in the world.
Lassen Volcanic National Park has a number of famous attractions, including the peak itself, Bumpass Hell and the Sulphur Works, two geothermally active areas, and a number of beautiful lakes including Manzanita and Summit Lakes. The Devastated Area records the result of the lahar and the pyroclastic surge in the main 1915 eruption. Our next few explorations will include several cones that are among the youngest mountains in the state, and a major volcano that has gone missing.
So why am I calling Lassen Peak an 'afterthought'? I'm kind of giving away the whole answer in the photo below, taken during a flight home from British Columbia a few years ago. At one time, Lassen would have been neither the tallest nor largest volcano in the park area. From about 600,000 to 400,000 years ago, that honor would have belonged to Mt. Tehama, a stratovolcano typical of the Cascades Range, similar to such peaks as Mt. Hood or Mt. Baker in Oregon and Washington. It may have reached heights of 11,000-12,000 feet. Following the last of its eruptions, the summit collapsed into a caldera*, or was simply eroded away, leaving behind a jagged ridge of peaks forming the rugged southwest corner of the national park. The Sulphur Works mark the approximate center of the extinct volcano. As can be seen in the photo below, Tehama would have dwarfed Lassen Peak. 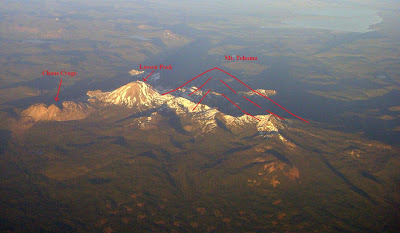 The trail to Bumpass Hell provides one of the best ground-level views of the ancient volcano. Brokeoff Mountain on the left and Mt. Diller on the right mark the remaining flanks of the Tehama volcano. The lava flows exposed on each peak slope upwards towards the former summit above the center of the picture. 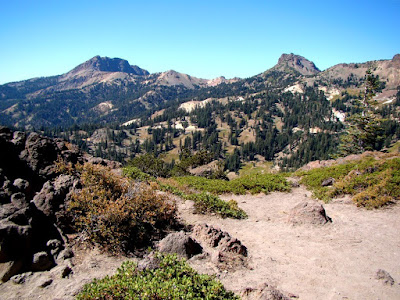 If any of my California Geology students have made it this far in the post, here is a free question from our Cascades quiz in a few weeks: Mt. Tehama is the most difficult mountain to climb in California, in fact no one has ever stood on its summit. True or False?
*How's this for a volcanic afterthought? As Donald Rumsfeld famously once said, "There are known knowns. These are things we know that we know. There are known unknowns. That is to say, there are things that we know we don't know. But there are also unknown unknowns." Forrest reminds of something that I knew, but didn't have ingrained enough in my brain pathways to recall as I was writing this post. There is no evidence that Brokeoff Mountain ended in a catastrophic caldera eruption, according to the latest research. Instead, the ash tuff (the Rockland Tephra) that was thought to derive from the destruction of Brokeoff actually predates Brokeoff. The volcano didn't form a caldera, but it did grew on top of an older caldera.
Posted by Garry Hayes at 2:50 PM

Note that it's the west end of the Park that's moderately well-known. The east end is practically deserted, as there's nothing actively geothermal there (though there's plenty of geologically interesting features, especially Harkness and everything near the Cinder Cone).

And I don't think I've ever seen another person at the Terminal Geyser.

There are also a ton of overgrown cinder cones east of the park, both in and around Caribou Wilderness, along with plenty of lava flows & caves (south, too, if you know where to look, including a nice little lava-tube ice cave).