The Other California: Whispers from the Past

Continuing our exploration of the places to go in California when you've seen all the places on the postcards...today we visit one of the largest petroglyph panels in the United States.

The Modoc Plateau is a high, flat geologic province in northeastern California. It is a lonely region that was formed by numerous horizontal flows of basalt lava, and then split (by stretching of the crust) into a series of fault grabens (valleys formed by fault movements instead of river erosion). One of these grabens lies at the north end of Medicine Lake Highland, and until 1905 or so it contained a huge shallow body of water, Tule Lake. Rivers were diverted, levees were built, and most of the valley was developed for agriculture. In the GoogleEarth image below, all the green fields were under water a century ago, and the black areas are the only remnants of Tule Lake. 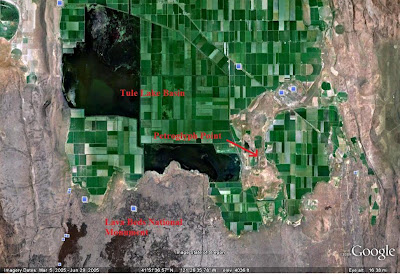 About 270,000 years ago, basalt erupted on the lake floor, and the interaction of the hot lava and water was explosive. These phreatomagmatic eruptions caused large clouds of steam and volcanic ash that reached heights of 15,000 feet, during hundreds or thousands of individual explosions. As the explosion columns collapsed, powerful pyroclastic surges formed layer after layer of ash and lapilli on the flanks of the growing cone. Later, when water interactions slowed, basalt flowed from vents on and around the cones.

The cliff in the picture below, Petroglyph Point, is one of these phreatomagmatic cones (a second cone is visible in the distance). It was shaped by lake water into a wave-cut abrasion platform which exposes the tuff layers in spectacular fashion. Each shelf-like ridge represents a different level of the lake. Differential erosion highlights variations in grain size and induration of the sloping tuff layers. Cavernous weathering, on the other hand, has produced tafoni, the distinctive hollows high on the cliff that are utilized by the many birds found here, especially the raptors. 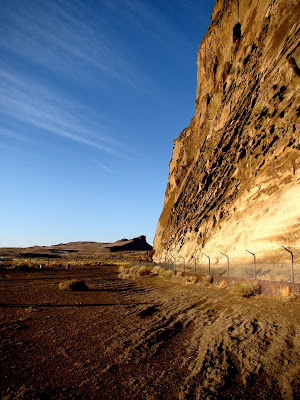 Between 2,500 and 4,500 years ago, the humans in the region rowed canoes or rafted across the lake to this island cliff (the lake was eliminated in 1905 as noted above), and carved more than 5,000 messages on the stone. It may be the largest single petroglyph panel in the United States. 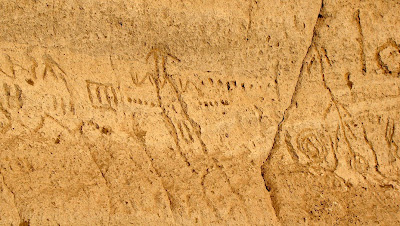 Some of the symbols are obvious in their meaning, especially the animal forms, but there are many more whose messages are lost to time. Unfortunately, the petroglyphs themselves are disappearing. Vandalism has destroyed many, and resulted in the construction of the chainlink fence. Even more insidious is the destruction by windblown sand. It was not a problem until the lake was diverted, but now abrasive particles blast against the soft rock on windy days, causing serious, irreversible damage. 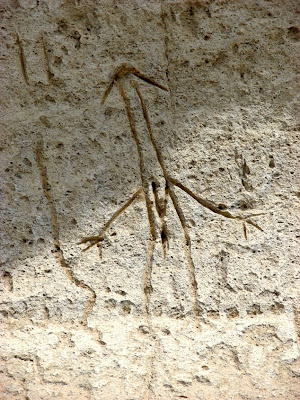 Petroglyph Point is managed and protected as an isolated part of Lava Beds National Monument. It is easily accessed by a short gravel road off the main highway through the small village of Tulelake, and is well worth a visit.