The Other California: Fleener Chimneys, Spatter Cones and Fault Scarps

This post continues our exploration of one of California's hidden corners, Lava Beds National Monument, on the flank of California's biggest volcano, the Medicine Lake Highland.

So what, pray tell, is the feature below? A Sarlaac from a Star Wars movie? A Doomsday Machine from Star Trek? Brendan Fraser's pathway to the center of the earth? No, it's one of the abandoned volcanic vents from Lava Beds, the Fleener Chimneys. There are three holes like this, around fifty feet deep, that were the conduits for the Devil's Homestead Lava Flow around 12,000 years ago. 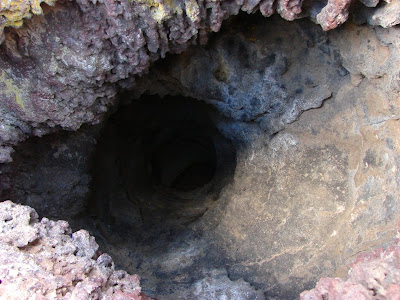 The eruptions were mildly explosive and messy, at least in the final stages. The Fleener Chimneys (below) are spatter cones, formed as molten bits of basalt were flung from the vents. Lava emerged and almost immediately floweed into lava tube systems, the openings of which can be seen in the near vicinity. After traveling some distance, the lava flows cooled enough to start forming a'a flows that give the Devil's Homestead its characteristic appearance. 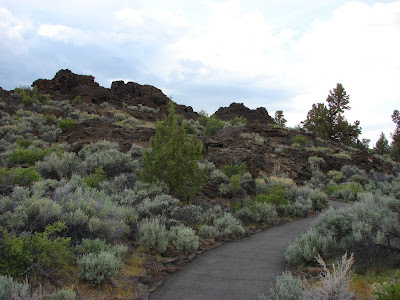 Another fine example of a spatter cone, much younger and fresher looking, can be seen at Black Crater, just a short distance away from the Fleener Chimneys turnoff on the main park road. It erupted only about 1,250 years ago, but might as well have been yesterday given its youthful appearance. 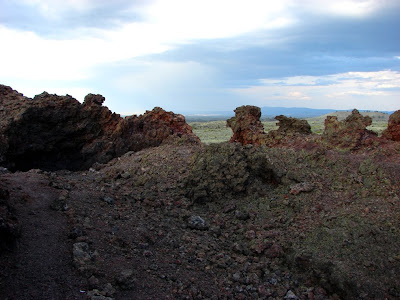 Why have these eruptions occurred on the lower flanks of the Medicine Lake Highland? A stereotypical volcano has a crater at the summit that produces the explosions, the ash, and the lava flows. As has been pointed out previously, the Highland is a unique exception to the "rules" of volcano types. Shaped like a massive shield, it has numerous small magma chambers with a variety of magma compositions. Fluid basalts follow weaknesses in the crust, and fault zones make a fine conduit to reach the surface.

Medicine Lake Highland sits at the boundary between the Cascades and the Modoc Plateau, and fault zones project into the volcanic edifice. Gillems Bluff, seen in the picture below, is a fault scarp, with the sunken graben of Tule Lake on the right side of the photo. It just happens that the fault that formed Gillems Bluff projects right through the Fleener Chimneys. 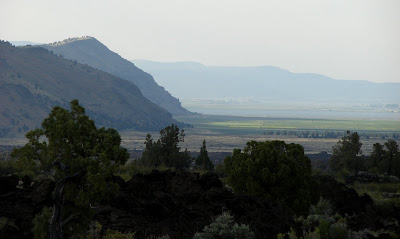 These features are easy to access during a visit to the park. If you are tempted to toss a rock into the Fleener Chimneys to see how deep they are, please resist the urge. A clean up crew recently removed 35 tons of rock from just one of the holes.

Fleener chinmeys, a new one for me. Great post Garry.