The Other California: California's Biggest Volcano 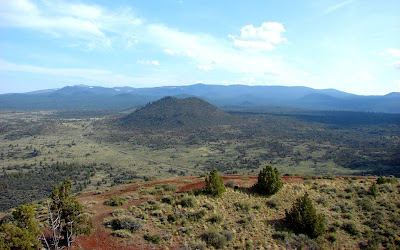 In reference to yesterday's question of the day, well, there was a bit of trickery involved. Mt. Shasta was correctly identified in the photo by several readers, and Mt. Shasta is a huge volcano. It is certainly the tallest volcano in California, it is the largest stratovolcano (composite cone) in the Cascades Range (second in height behind Mt. Rainier, but bulkier), and by some accounts could be the biggest stratovolcano on the planet (I can't confirm that one). But...it wasn't the biggest volcano in the picture. On the boundary between the Cascades and the Modoc Plateau provinces are several shield volcano complexes, including Newberry Volcano in Oregon, and the broad dome of Medicine Lake Highland in California. Even though the highest summit on MLH does not exceed 8,000 feet, the volume of the complex is more than 130 cubic miles, as compared to Shasta's 108 cubic miles. It is California's biggest volcano.

Shields are largely composed of basaltic lavas, which tend to be less viscous, and thus less likely to develop steep slopes as they congeal. So the slopes of the mountains are usually quite gentle, and rarely produce strikingly high mountains (here is a photo of Mauna Loa, one of the biggest shields on the planet). In yesterday's photo, MLH takes up most of the photo, with Shasta on the far right-hand side. In the photo above, I was standing on a cinder cone on the flank of MLH, and couldn't fit the whole mountain in the frame.

As far as my biased self is concerned, MLH is one of the best places to visit a volcano in California. It will take a number of blog entries to cover all the fascinating features scattered around the mountain. Most of the volcano is under the jurisdiction of U.S. Forest Service, but a significant portion of the northeast flank is preserved as Lava Beds National Monument. 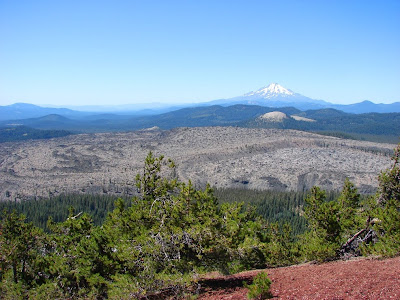 A picture from one of the summits of the complex, Little Mt. Hoffman, shows one of the oddities of the giant shield of MLH. The gray edifice in the foreground is Little Glass Mountain, a dome of pumice and obsidian of rhyolitic composition. On a volcano largely composed of black basalt, viscous flows of rhyolite (a completely different lava) should be deemed a bit strange. That's Mt. Shasta in the distance.

The Medicine Lake Highland sits astride an ill-defined boundary between the Cascades and the Modoc Plateau. For purpose of these blogs, I'm going to lump it with the Modoc Plateau, as some of the story I will be telling about the mountain will spill into Modoc territory. The Modoc Plateau is a lonely flat region in northeastern California floored by thousands of feet of basaltic lavas and intervening layers of lake and river sediments. The region is sliced by a lot of normal faults, and punctuated by numerous small cinder cones. The area is not considered all that volcanically active in the present day, except for the Medicine Lake Highland, which has cones and flows that are no older than 900 years. If you watch late-night television, you have seen the Modoc Plateau; it's that real estate that Erik Estrada tries to sell in the infomercials...hey, it's pretty country, but it's really isolated and lonely.
Stay tuned!
Posted by Garry Hayes at 3:27 PM

Very cool Garry. I like all the hummocks that are seen on the western side of Shasta but know nothing of the eastern side. Have been to Newberry Crater and surrounding obsidian flows which are quite impressive. Been way too long since I've been to Lava Beds.