The Other California: Prairies Past and Some Nice Folding 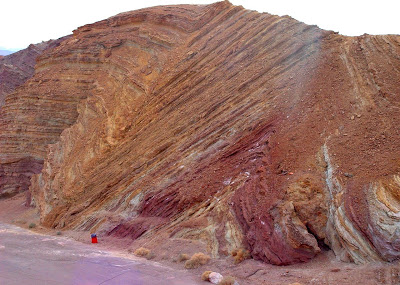 Visitors at Calico Ghost Town in the Mojave Desert geomorphic province are treated to an authentic old mining town complete with bars, melodrama theatres, staged gunfights, and portraits in oldtime clothing. They may even learn a bit of genuine history of the old silver mining district from the occasional sign. Calico is California's Official Silver Rush Ghost Town (discussed in a previous post), and is definitely worth a stop, but not necessarily for the reason envisioned by those who run the park. The parking lot sits in the gulch below the town, and exposes some of the finest folds to be seen anywhere. They have appeared in many geology textbooks ("textbook examples" of anticlines, the upward pointing folds, and synclines, the downward pointing folds). 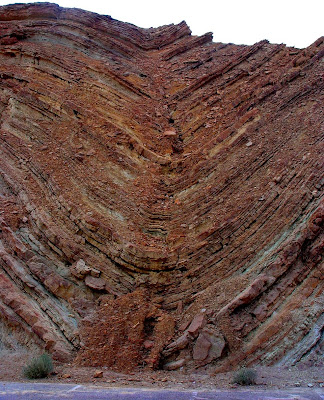 The origin of these folds has been the subject of much discussion, but their proximity to an active transverse fault (the Calico fault) suggests they developed as a result of transpressional stress. Place a sheet of paper flat on a table, and put your palms on each end. Moving one hand towards you and the other away from you will cause crumpling across the middle. Those crumples are transpressional folds.

A bit farther to the west, the Barstow Formation is exposed at Rainbow Basin Natural Area, administered by the Bureau of Land Management. An upside-down rainbow, the Barstow Syncline, is one of the most striking features. I talked about the area in a previous post. 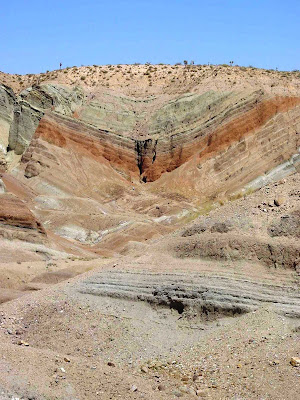 In a marked contrast to the volcanic rocks that make up the core of the Calico Mountains, the Barstow layers are sedimentary rocks. Sedimentary structures such as mudcracks (below) and ripplemarks indicate that the sediments accumulated in a faulted basin in a moderately tropical and occasionally arid environment, essentially similar to the African Savannah of today's world. It was a world of grasslands and palm trees that existed between 13 and 19 million years ago, based on radiometric dates of volcanic ash layers that bracket the sedimentary strata. 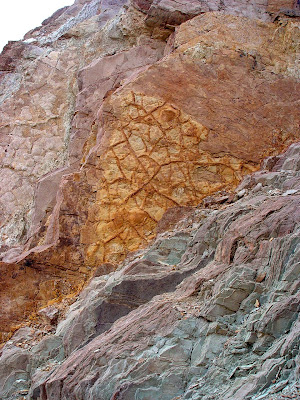 An African savannah. Visions of elephants, giraffes, zebras, and rhinos. But not in America, right? Well, time for a new vision. The most stunning aspect of the Barstow Formation is the diversity of fossil species found in its layers. Numerous species of ancestral horses and camels, a rhino ancestor (Aphelops), and an early elephant called a gomphotherium (similar to those big elephants in the Lord of the Rings movie, only much smaller) are among the discoveries. Feeding on these planteaters were one of the earliest cats (Pseudaelurus), an ancestor to the coyotes (Tomarctus), and a probable forebear to the bears and dogs called an Amphicyon (pictured below). 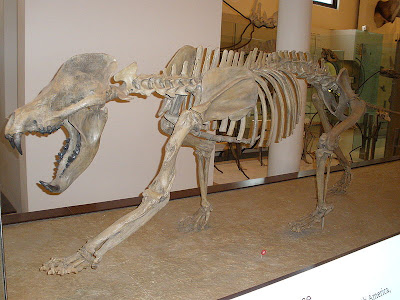 Photograph by Ghedoghedo
The extreme diversity of the fossil assemblage, and the fact that the formation is well-dated led to the establishment of a portion of the geologic time scale called the Barstovian stage of the Miocene epoch, referring to the time period from 16.3 to 13.6 million years ago.
One further aspect of the fossil record in the Barstow Formation are calcareous nodules that contain nicely fossilized insects. Insects are rarely preserved as fossils, but the bugs in the lake sediments were replaced by silica and were supremely preserved, to the extent that even leg hairs are visible.

A technical article from the GSA Bulletin on the Barstow Formation (abstract; full article requires fee or GSA membership)

A nice slideshow about the Barstow Formation and the fossils it contains, from the San Bernardino County Museum.
This has been an entry in the series on the Other California.
Posted by Garry Hayes at 6:01 PM

Garry, these are excellent and beautiful examples of folds. I truly haven't explored this area enough.
I only knew of a few of these species of ancestral fauna. Sure is nice to learn more about "the other CA."