The Other California: Geology and our State Symbols 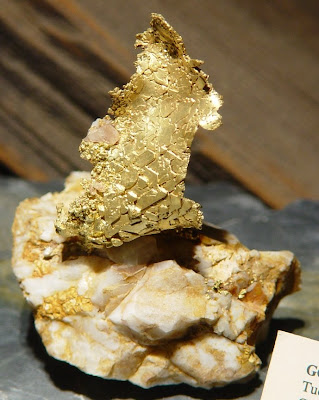 Gold was the obvious choice for the state mineral of California, but at the time, no other state had actually selected a state mineral, or rock for that matter. California was the first in each category, making it official in 1965. More than 100 million ounces of gold was mined across the state beginning before 1800 and extending to the present day (some mines were in operation in the far south of the state, just over the border from Mexico in the late 1700's, but no rush occurred to speak of). A minor rush took place in 1842 in Placerita Canyon near Los Angeles, but the ores were soon exhausted. It was the discovery of some flakes in the millrace by James Marshall at John Sutter's sawmill at Coloma that led to the mass migration of hundreds of thousands of people looking for riches that forever changed the state (and sealed the fate of most of the native indigenous people who were already here). For better or worse, gold was central to the early history of the state.

At the same time that gold was selected as the state mineral, serpentine was designated the state rock. Serpentine (more properly called serpentinite) is a metamorphic rock derived primarily by the alteration of peridotite (a rock from deep in the earth's mantle composed of the gemstone peridot, also known as olivine). Chemically it is a magnesium silicate. It is a relatively common rock in California and relatively rare in most other places, and was picked for an ironic reason: it is a source of asbestos, which at the time was considered a valuable resource. The dangers of asbestos in building construction was not generally realized at the time.

For different reasons, I think serpentine was an excellent choice for our state rock. The fact that the source of the rock is deep in the earth's mantle, beneath the 15-25 mile thick crust, is a revelation and acknowledgement of the incredible forces that have shaped the state. Imagine what it takes to bring masses of rock from such great depths! California has the incredible scenery that it does because of forces of movements along plate boundaries, whether the lateral movements along the San Andreas fault, the vertical churning that occurs along convergent boundaries, where ocean crust is driven underneath the edge of the continent, or the splitting that occurs at the divergent boundary in the far south of the state.

The rock is also quite pretty, to this geologist's eye. It ranges in color from black to intense jade-green. The journey from deep in the crust to the surface along fault zones usually leaves beautiful polished surfaces on the rock. 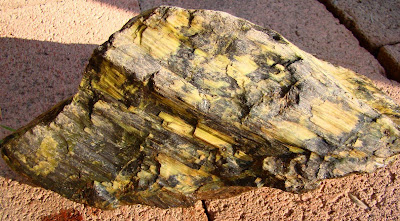 As to the state's choice for a symbolic gemstone, the state legislature made a great one: a stone that is not only found just in California, but is found at only one place in California, in a remote corner of San Benito County in the Coast Ranges. It is called Benitoite, and is a beautiful sapphire blue. The barium-titanium silicate mineral was declared our gemstone in 1985.

Benitoite has another distinction. There are 4,000 or so minerals known in the world, and they crystallize into 32 geometric classes. Out of all those minerals, benitoite is the only one that crystallizes ditrigonal-dipyramidial class in the hexagonal system. 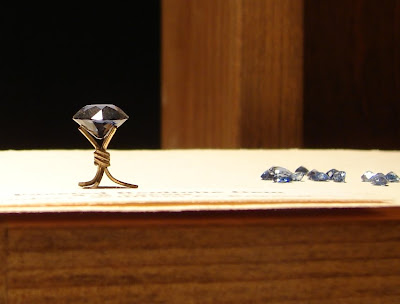 The natural crystals occur in beautiful triangle patterns, seen in the picture below. Despite their rarity, one can visit the mine and screen the tailings for benitoite crystals, and other rare minerals, including neptunite. For a price, of course. 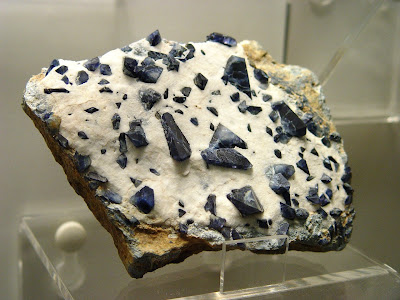 In the next post, the geologic story behind some of our animal symbols...
Posted by Garry Hayes at 10:32 PM

Great post Garry. The only one I knew was gold. Had serpentine near Oregon Caves and some very interestng plants that can tolerate that soil. Also a good carving stone. I like that unusual crystal structure and color of the benitoite, which I wasn't familiar with. I may be have hunt up a specimen for my collection.