The Other California: Geology and the other State Symbols, Part I

The Sierra Nevada of California are enigmatic: a great deal of conflict has existed over the origin, uplift, and erosion of the range. Did the mountains rise in the Cretaceous, and only slowly erode as the Basin and Range sank off to the east? Did the mountains erode to low hills in the early Cenozoic, and rise rapidly in the last few million years? Conflicting evidence exists that seems to support either contention. And of interest to me in the context of today's post, why is the southernmost part of the Sierra a plateau, and why does the Kern River and its tributaries flow south instead of west like most other major rivers in the Sierra Nevada? To be honest, I don't have answers to those questions today.

When I was a child and young teen, I spent several summers at a Boy Scout Camp in the Kennedy Meadows area of the far southern Sierra (for my local readers: this is a different Kennedy Meadows than the one near Sonora Pass). Circle B Scout Ranch was a truly isolated camp, in a little-known, little-traveled part of the Sierra. It closed in 1974 and was sold off for reasons I still don't quite understand. One of the highlights of a stay at the camp was an overnight backpack into the adjacent Domelands Wilderness. Dozens of granite domes pierce the sky, the products of exfoliation jointing similar to that which forms the more familiar landmarks in and around Yosemite. Most tellingly, the region reaches no higher than 9,000 feet, so glaciers of the Sierra ice ages never reached this part of the range.

The South Fork of the Kern River traverses this landscape. It is quite unlike any other river in the Sierra Nevada. Where other rivers have carved deep rugged canyons, the Kern flows almost randomly across a series of gentle meadows and broad valleys with barely a canyon at all. 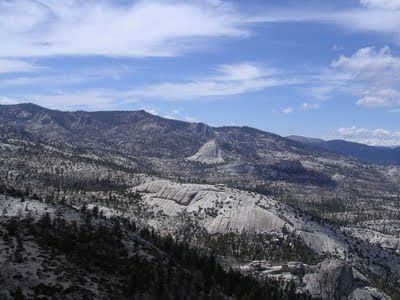 So, what do all these musings and memories have to do with today's topic? It's a fish, a trout which by virture of isolation in the forks of the Kern River has evolved into one of the most colorful members of its genus. Oncorhynchus mykiss aguabonita, the Golden Trout, was selected to be the California state fish in 1947. 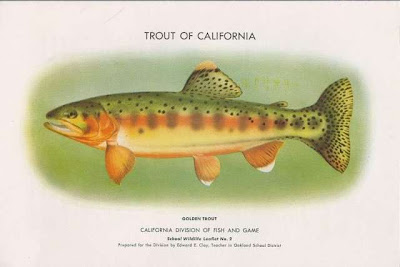 I have no claim on knowing all the details of fish evolution in the American West, but the trout and their cousins the salmon have an interesting history. Apparently they evolved in fresh water, but eventually started to utilize richer feeding grounds in the oceans, thus the familiar life-cycle of salmon being born in rivers, living most of their lives in the oceans, and returning rivers to breed and then die. Sea Run Coastal Rainbow Trout have a life-style just like the salmon, and as a result, rainbow trout are widely distributed along the western coast of North America, and over time penetrated deep into the interior, including the major rivers of the Sierra Nevada.

The complicated tectonic, volcanic and climatic history of the western mountains caused a number of trout populations to be separated from the sea, and from each other in isolated streams and rivers. They adapted to different conditions, and thus a wide variety of trout are found throughout the west, including in the desert interior (the Lake Lahontan Cutthroat Trout is a vivid example in the Nevada desert). Many populations were established in the Sierra, only to be wiped out by the advance of glaciers during the ice ages. But far to the south, a few populations survived in the headwaters of the South Fork of the Kern River. In the cold icy, but non-glaciated streams, the brightly colored Golden Trout evolved. They tend to be smaller than their cousins, due to the limited food supplies at the high altitudes where they live. 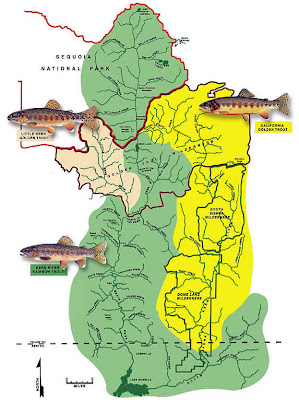 The goldens were transplanted to other streams in the Sierra and other parts of the west (including the Cottonwood Lakes which function as a defacto hatchery), but because they hybridize readily with their rainbow cousins, the strains are not pure, and not as colorful. The only truly pure strain is the original in the upper part of the South Fork of the Kern, and the state and federal government are making a concerted effort to prevent Rainbow and Brown trout from invading those headwaters.

While I was searching for info on the Golden Trout, I came across some references to a real monster that once prowled to oceans and streams of the Pacific Northwest and California: a 6-foot long saber-tooth salmon (smilodonichthys rastrosus)! Picture here, and an example of research here.

I love when geologists don't have all the answers.