The Other California: Geology and the other State Symbols, Part III 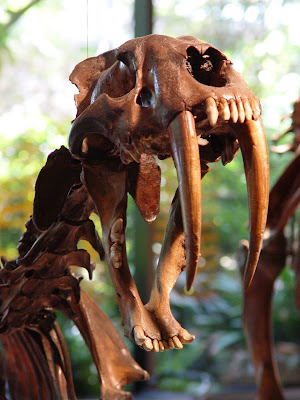 I was walking alone a couple of years ago in Yosemite Valley, on a surprisingly lonely trail between the visitor center complex and Yosemite Falls. Yes, I know all that about not hiking alone, but I thought it was a busy trail and a short distance. Just the same I was enjoying myself, having found a bit of solitude in a very busy park. Until I got spooked. It wasn't that I saw or heard anything. It was that I didn't hear anything. It had been a few weeks since a mountain lion attack somewhere in the state, and I was walking along these huge boulders that had fallen from the cliffs above, and any of them would provide a great hiding place for the big cats.

Nothing happened, of course. My life has not been THAT interesting yet. But it got me thinking. Grizzly Bears have been extinct in the state since the 1920's. The remaining black bears have not caused a single fatality in Yosemite since the park was established (they have been a lot nicer to us than we have been to them). Despite a few newsmaking exceptions, cougars have not been much of a threat to humans. We have a better chance of dying from bee stings and car accidents. This has not always been the case in California.

Prior to 12,000 years BP, our state would have been an intimidating place. Packs of Dire Wolves and American Lions roamed our prairies, seeking their prey from among the herds of horses, camels, antelope, bison, elk, mastodons, and mammoths. Short-faced bears, larger than grizzlies and polar bears, would have at least considered having you for lunch. In more forested and brushy areas, the large plant-eaters faced a threat from one of the most intimidating predators of all, the saber tooth cat (Smilodon californicus).

The Smilodon californicus was selected as the state fossil of California in 1973, beating out the trilobite species Fremontia fremonti for the honor. I understand the desire of many of the paleontologists to have a trilobite named the state fossil, but I must say I get a lot more oohs and ahs from elementary students when they see my Smilodon skull during their visits at the department. They are absolutely fascinated to find that the animal once lived, quite literally, in their backyards. So do I!

Isn't it exciting to imagine the earth back any amount of geologic time? I never thought about their being a "state" fossil. I saw a saber tooth fossil at John Day Fossil Beds in OR. Talk about BIG.
I love to hike alone, but not every where. I'll get lost in thought and start humming or singing (which will scare anything away) to break the silence I love.
Another great post Garry.