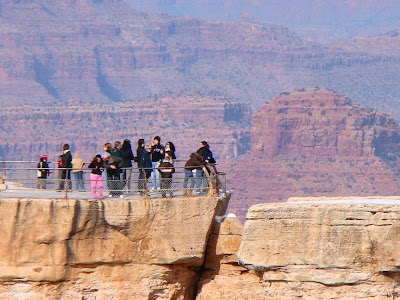 In geology, scale is everything. We have a hard time understanding the meaning of a million or billion years when our own personal experience extends across only a few decades. A place like the Grand Canyon seems immutable and unchangeable in a human time frame, but it is simply spectacular what can happen on a time scale of five or six million years. An entire gorge, one of the largest on the planet, can be produced by nothing more than a river flowing and gravity pulling rocks from cliffs. A zoom lens can serve as a metaphor for human existence in the midst of deep time.

It has been my experience that when I look upon a scene of such grandeur, my mind is not fully capable of taking in the true scale of the canyon. The vastness of the scene has been shrunk to a single image in the back of my eye, and my ego makes me much larger in relation to the canyon in front of me. One way to gain a truer sense of scale is to hike the canyon. Nothing drives home the depth of the gorge more than trying to walk back out. It looks a LOT bigger when you stand at the bottom and look up!

On the other hand, one can stand on the rim with a camera, and see what happens to people scaled to the immensity of the canyon. I stood this morning at Mather Point and snapped a shot of people enjoying the view (above). 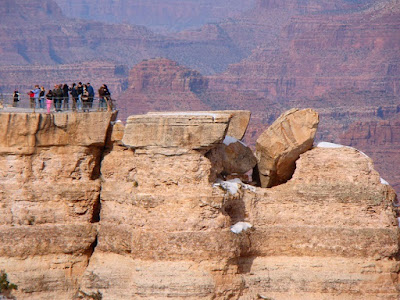 I was actually some distance away, using a 30x zoom, so I back out to 15x or so, and a strip of the Kiabab Limestone becomes visible. The rock is a mixture of limestone and sandstone that formed in a shallow sea in Permian time, around 250 million years ago. 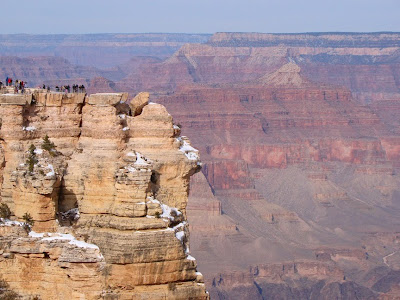 Zooming out to 7x or so, the cliff grows in size, and the tourists are shrinking into insignificance. The cliff they are standing on is a few hundred feet high, but the real news here is the far rim of the gorge. Do you see the double layer of light colored rock separated by a forested slope? That thin whitish strip across the top is the same Kaibab Limestone! It is one of the thinner layers that makes up the cliffs of the Grand Canyon. 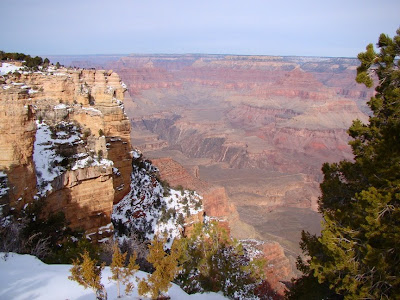 I was about a quarter of a mile away from the people at the viewpoint, and without a zoom they are practically invisible on the upper left. The canyon is ten miles wide, and more than a mile deep. We humans are mere insects in the face of such immensity. The existence of human civilization over the past few thousand years fades into an equal insignificance over the immensity of geologic time. The rocks in the deepest part of the canyon are more than 1.7 billion years old!

I want to pay a compliment to the National Park Service. I was most pleasantly surprised when we arrived at Mather Point this morning. For years, Mather Point was the spot where the majority of visitors saw the Grand Canyon for the first time. There was a crowded parking lot, always noisy, always kind of trashy. It got worse when the NPS completed the new visitor center a few years ago, because Mather was the closest parking lot and consequently the competition for parking spots increased. It was an untenable situation.

When got there today, we discovered a new parking lot and a realigned highway that diverted traffic away from the rim (completed in November). One could park at the visitor center, and take a two minute stroll to see the canyon for the first time. No trash, no noise, just a beautiful rim walk with the silent immensity of the canyon, and the occasional croak of a raven. The people I saw looked reverent instead of hassled. It was a moment of rediscovery, and I want to thank the park service for a job well done.
Posted by Garry Hayes at 11:11 PM

Excellent use of photos to demonstrate the epic scale of geology.

I am especially jealous of you x30 zoom lens. I might have to get me one of those...

Thanks for showing me home. I expected to see more snow. Also glad to hear you liked the new improvements at Mather. It was a mess this summer.

Very interesting! It is really weird to think about time in that light..

This is very neat - just saw it today. A great post about deep time and scale!