The Other California: Geology and the other State Symbols Part 5 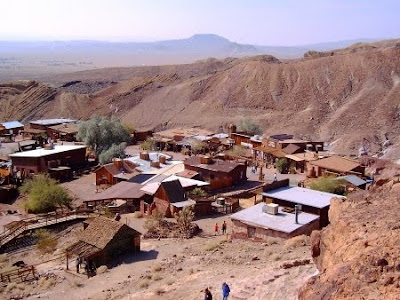 Top photo by Enrico Stirl, others by Garry Hayes 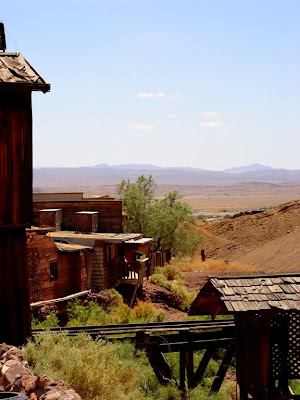 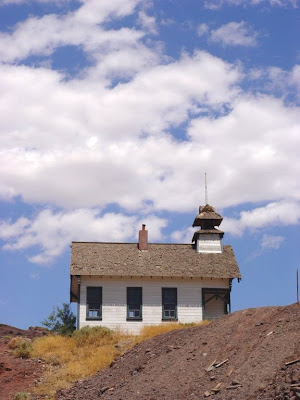 As noted in the previous post, California has established two official state ghost towns, one for the gold rush, and the other for the "silver rush". Bodie, the official "California State Gold Rush Ghost Town", lies on a high windswept plateau in the barren hills east of the Sierra Nevada, far from any major population centers, at the end of a dirt road. It is the very essence of loneliness and solitude, and I could almost swear you can hear the tortured spirits moaning as you wander through.
The state's official "State Silver Rush Ghost Town" could not be more different. To call it a "Disneyland in the Desert" is not far from the mark, although a "Knott's Berry Farm in the Desert" is far more accurate. Although it is a regional park under the auspices of San Bernardino County, it is really a tourist trap lying a couple of miles off the freeway running between Los Angeles and Las Vegas. You can drink sarsparilla in an old-time bar lined with paintings of the famous gunfighters, you can watch a gunfight in the streets, catch a melodrama in the theatre, buy trinkets in the gift shops, walk through the mysterious cabin where water flows uphill, tour the Maggie Mine, and ride the little train through the hills. You can stay overnight in the campground, complete with showers and hookups. And...Kenny Rogers once produced a two-record album about the place called the Ballad of Calico (for those of you unfamiliar with the concept, a "record" was an ancient pre-MP3 method of conveying music)..

Now, it sounds like I'm demeaning the place, but actually I like it a lot. The Kenny Rogers album, long out of print, is one of my most cherished possessions. My family spent a lot of time there, and I even did my senior thesis in the area. It is fun, but it is not "the Other California" of my current blog series. It's on too many postcards and tourist brochures. It turns out the "Other California" can be defined in a few different ways. The magic, to me, of Calico is beneath the surface of the town, and in the surrounding hills, the parts a lot of tourists never hear about.

The ghost town is a genuine historic mining camp. Silver was discovered around 1881, and despite the horrific lack of water and blazing summertime temperatures, the town grew to a population of 1,200 before a drop in the price of silver killed the mines in the 1890's. There are claims that more than $20 million of silver was produced. The discovery of borates nearby caused a brief resurgence in 1907, but the town was abandoned within a few years.

In 1951, the whole town was purchased by Walter Knott (there really is a close connection with the theme park). He took some of the buildings to Orange County to construct the core of his amusement park, but he also rebuilt some of the ruins, and made a tourist attraction in the desert as well. He donated the park to the county in 1966.

Like Bodie, the town was threatened for a time by plans for renewed mining, and the large hill just west of town is criss-crossed with roads for the drilling rigs. The company was probably considering a large open-pit mine at the site. The scheme was eventually abandoned, probably because of low silver prices.

So, what really is special about Calico and the Calico Mountains? That will be in the next post!

I'm sure I went there as a kid. Remember the uphill water flow thing mostly and a bunch of old buildings. Such a cliff hanger. ;-)

My hometown is Barstow. I'm so happy to see Calico make it to your blog! Such beautiful country there, especially as seen from far away in Ohio now.