The Other California: Now this is a postcard for a Geologist! 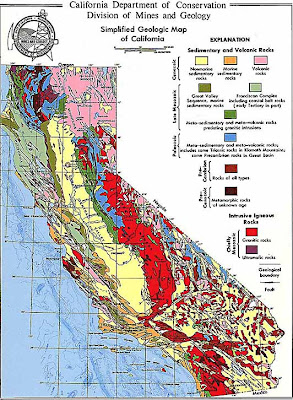 In the run-up to a series of blogs on some less-than-familiar parts of my home state of California, I used some postcards that are available in just about any store or tourist trap in the state. They show the famous landmarks of the state, which usually happen to be very geological in nature, such as Yosemite National Park. Today's postcard, which I doubt would be found in the usual tourist haunts, is very useful in searching out the kinds of places I want to talk about in coming weeks. It is a geologic map of the state, a representation of California from a geologist's point of view. The colors on the map represent the types and ages of the rocks found around the state. This map really was on a postcard provided by the state geologic survey, and can be hard to read, so I have provided a larger format for seeing the information below (just click on the image for the bigger picture). This map was compiled in 1966, before the advent of plate tectonics theory, but it shows the rocks pretty well (the rocks didn't change; our interpretations of how they got there did). A more modern version of the state's geology can be found here as a pdf file.

People who see these maps for the first time may be intimidated by the sheer variety of rocks in our state. We have literally every kind of rock there is in abundance; volcanic and plutonic igneous rocks, sedimentary and metamorphic rocks, and an abundance of loose sediment (the yellow stuff, especially in the Central Valley and desert areas). A resident looking at the map to see where their house sits in relation to the famous San Andreas fault may dismayed to find that there are a great many faults in the state that they were not aware of! 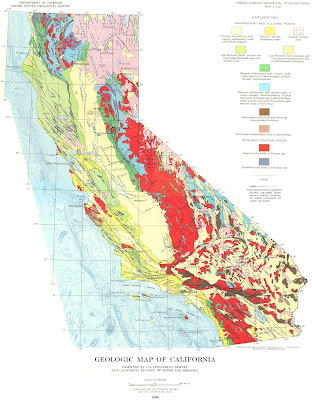 To make some initial sense out of the geological chaos that is our state, the geologists noted areas in the state that seemed to share a common geological history, even if the rocks themselves are complex and highly variable. Note, for instance that most of the Sierra Nevada mountains are composed of granite (red), and that the Central Valley is mostly loose sediment. The northeast corner of the state is primarily volcanic in nature. These areas that have a unique geologic history that is distinct from surrounding areas are called the physiographic provinces of the state. The map shown below, from the U.S. Geological Survey, shows the boundaries of the eleven provinces of California superimposed over a geologic map (minus most of the faults, rivers and other features). As I start my journey to the unknown corners of the state, I will refer to their location in relation to the province in which they are found. The first entry in the series, on the California prairies, made reference to three such provinces: the Great Valley, the Sierra Nevada, and the Coast Ranges. More details on each of these provinces will soon follow! 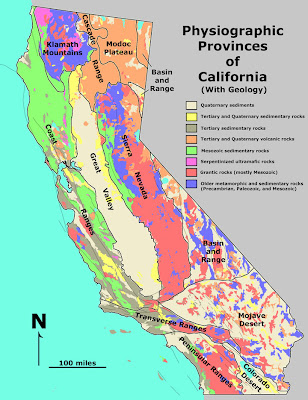 I like this postcard the best. Looking forward to more on the other CA.

You're right about that, the sense I was after was "prior to the full acceptance of".

Here are some of the other 1966 and prior citation classic plate tectonics papers. Discovered that a majority are online for free: