The Other California: The Calico Mountains 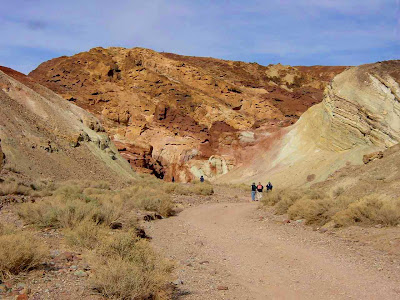 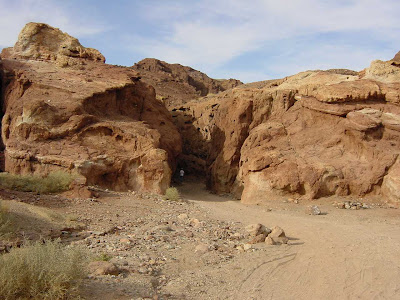 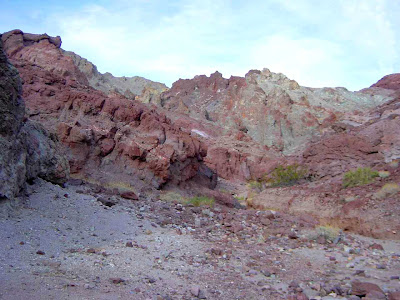 I am doing a series of the kinds of geological places in California that don't appear on all the postcards, but which would be major attractions in any other setting. The Calico Mountains fit the bill in a way, because despite the fact that Calico Ghost Town is a major tourist destination, and a symbol of the state of California, there is a geological richness there that the vast majority of visitors never see or realize.
The Calico Mountains rise to the northeast of the town of Barstow, just a few miles off of Interstate 15 on the way to Las Vegas. The Ghost Town lies on the south flank of the mountain, and as mentioned previously, it was California's most important mining center for silver, with a rich resource of borates minerals as well. The rugged colorful mountains reach 4,542 feet at Calico Peak and are largely composed of volcanic rocks erupted within the last ten million years or so. The volcanic rocks intruded and erupted on top of an older series of volcaniclastic and sedimentary rocks deposited in basins in Miocene time, around 15 to 19 million years ago, which were in turn deposited on a basement sequence of Paleozoic metasedimentary rocks and other metamorphic rocks of indeterminate age (arguments range from Mesozoic to Proterozoic!).

A major fault slices across the front of the mountains, the right lateral Calico fault, which provided a major avenue for hot mineralized waters to rise close to the surface. The hot spring activity produced veins of barite, calcite and agate that hosted most of the silver ores. Recent research has indicated that the region is part of a metamorphic core complex that experienced a great deal of extension in Miocene time.

Wandering away from the tourist haunts at Calico Ghost Town can became a wonderful adventure. There are other ghost towns, actual ruins of mining camps, dozens of mines, and wonderful outcrops of strangely eroded volcanic rocks. The pictures above were taken at the entrance to the narrows of Odessa Canyon, a popular 4WD track, although I like walking it far better. The usual warnings about exploring old mines are especially relevant here; the mines follow veins and "glory holes", which means sudden drop offs in unexpected places. A cousin of mine once almost dropped a jeep into one of the mine openings (I appreciate winches all the more now).

The top picture shows another aspect of the geologic history: the light colored rocks in the foreground are on one side of the fault, and the darker volcanic rocks are on the other. The light-colored rocks have an incredible story quite apart from silver mineralization; they are the silts and sands of the Barstow Formation, one of the most important fossil-bearing strata in California. And I'll bet not one in a hundred of the tourists has a clue what they are camping and hiking and touring on. I will discuss them in some additional detail in the next post!
Posted by Garry Hayes at 11:54 PM

Thanks for the post. Wish I had know about this when I drove through Barstow a few years ago. Maybe next time... :)