The Other California: The things it is not 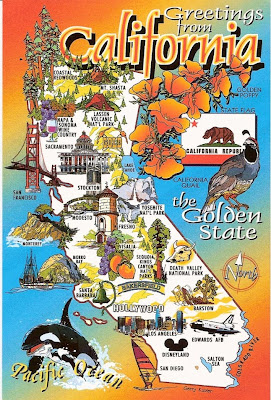 It didn't take long to figure out how to find the places "everyone knows": I was on the road, there was a tourist trap with bathrooms, and a bunch of postcards for sale. What better place could there be for the attention-deficit-disorder tourist to find out the important sights to see. I grabbed two postcards showing the whole state (50 cents apiece or 3 for a dollar; I grabbed a third card that shows the famous Tehachapi Loop). The cards are published by Scope Enterprises, Inc (no web presence that I could find).

The first card has a lot of information packed in a small space: LA, San Francisco, San Diego, Disneyland, Napa-Sonoma, and much to my surprise, a whole gamut of Central Valley cities: Sacramento, my own Modesto, Stockton, Fresno, Visalia and Bakersfield. The national parks are there: Yosemite, Sequoia/Kings Canyon, Lassen Volcanic, Redwoods, Death Valley, Joshua Tree, and Channel Islands. Mentions of the coast, Hollywood, Salton Sea. All in all a pretty good effort at nailing down the main tourist destinations, pretty much a checklist for the first-time California traveler. It even includes a few of our state symbols, the Golden Poppy, the California Quail, and the state flag. 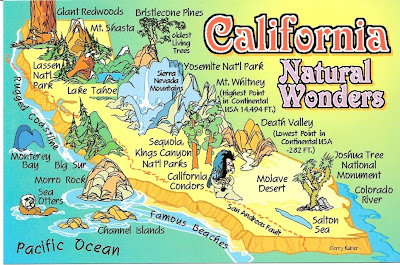 I like the second card even more: the Natural Wonders of the State. The same national parks, plus Lake Tahoe, the Colorado River (so big and wide that it looks like California is probably already falling into the sea), the Mojave Desert, Bristlecone Pines, California Condors, Sea Otters, Mt. Shasta, and Morro Rock. Best of all, a red dotted line representing the San Andreas fault winds its crooked way across the state. I don't necessarily expect perfection in postcard maps, but this one takes the cake!

So, in future posts about the "other" California, these are generally the places I won't be talking about (I may make an exception over Morro Rock and perhaps the Bristlecone Pines).
Posted by Garry Hayes at 7:13 PM

Labels: postcards, The Other California

The postcards are fun Garry. I look forward to the other CA.