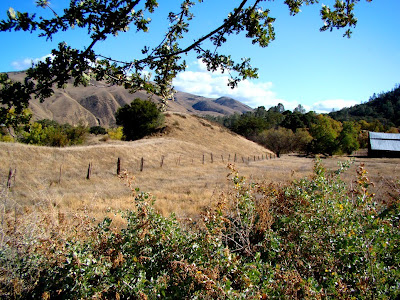 As noted in the previous post, we spent last Saturday on a field trip exploring the San Andreas fault system between Hollister and Pinnacles National Monument. After our walking tour of downtown Hollister, we set off to the south on Highway 25 towards Pinnacles. Along the way we crossed the San Andreas fault several times, and saw numerous signs of the fault's presence.

At the farm in the picture above, one has to wonder why a sharp linear hill rises out of the ground in the middle of the valley of the San Benito River. This is a scarp of the San Andreas fault, created as a hillside was split laterally and transported into the valley (because the ridge blocks off stream flow across the valley, it has been called a shutter ridge). The fault literally follows the fence line! I can think of few places where the fault is so clearly delineated. 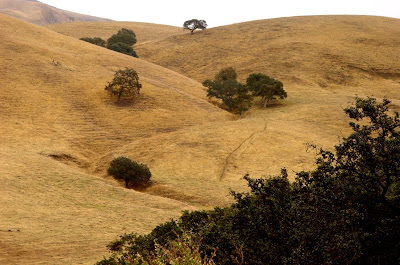 Up the road a short distance, a streambed has been offset in a right-lateral sense . Note the two 90 degree turns the channel makes; the fault follows the channel across the center of the picture(the tight grouping of three oak trees has moved to the right of the single oak down in the channel on left side of the picture). Benches and small landslides also mark the fault trace. 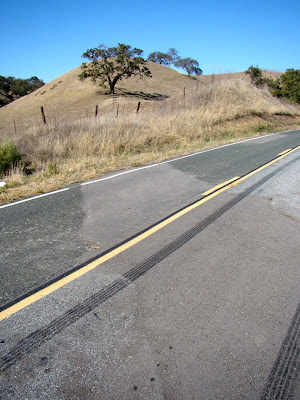 The San Andreas fault crosses the highway in the picture above, but they repaired the road! There used to be a prominent bump as one passed from the North American Plate to the Pacific Plate. I dug into the archives to find a shot of the road after an earlier attempt at patching the damage.. 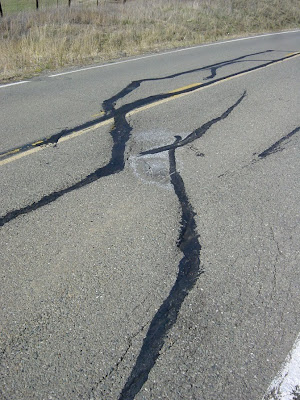 Thanks for you field trip posts! :)

Sure am enjoying this virtual field trip. Thanks Garry.

I think the San Andreas is the "Master" fault of an intrincate fault network that cuts through rocks of the California coastal region. The entire San Andreas fault system is more than 800 miles long and extends to depths of at least 10 miles within the Earth. In detail, the fault is a complex zone of crushed and broken rock from a few hundred feet to a mile wide. Many smaller faults branch from and join the San Andreas fault zone. Almost any road cut in the zone shows a myriad of small fractures, fault gouge (pulverized rock), and a few solid pieces of rock.
No forget that the presence of the San Andreas fault was brought dramatically to world attention on April 18, 1906, when sudden displecement along the fault produced the great San Francisco earthquake and fire. This earthquake, however, was but one of many that have resulted from episodic displacement along the fault throughout its life of about 15-20 million years.