The Airliner Chronicles: Why are these Volcanoes Here? 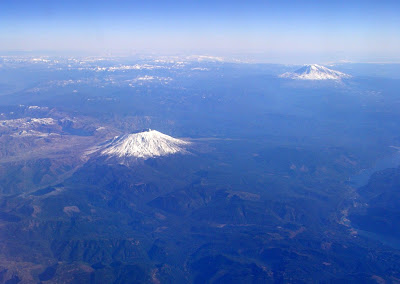 A photo from my flight to a GSA meeting in Seattle a few years ago recalls a question that had different answers, depending on when you asked the question, or more like, no answers if you go back far enough in time: Why are these volcanoes here?

The subject popped up in my head as a result of the passing of one on of my professors this last month, Donald B. McIntyre. In reading some of the tributes to his life, I recalled that he had studied under Arthur Holmes, who was one of the pioneers in the acceptance of the hypothesis of Continental Drift, which was later refined into the theory of Plate Tectonics, an idea so radical that it pretty much rewrote an entire science (imagine if the chemists discovered an idea to replace atomic theory). Dr. McIntyre was actually involved in two revolutions of geology: he was also a historian who documented the life of James Hutton in several books.

It just happened that I had picked up and started reading Plate Tectonics: An Insider's History of the Modern Theory of the Earth, edited by Naomi Oreskes. It is composed of 17 essays by the researchers who uncovered the evidence for plate tectonics in which they remember the events in their own lives that led to the new theory. It is fascinating to learn what was in their minds during the 1950's and 1960's as the realization slowly dawned that what they had always accepted about the structure and history of the earth was not necessarily true. What happens when a bunch of young professors and graduate students stumble onto something that was both unknown and unimagined?

Reading these stories made me wonder about something else. What was it like to be a teacher or professor in the 1960's when the revolution of the science was at its height? I came on the scene a bit late to really know, taking my first class in geology in 1975, when plate tectonics was already becoming established in the classroom. If you were in the classroom in the 1960's, how much of the debate filtered into your curriculum? Was it a topic of discussion in classes, or was there even a realization that something big was going on in the science? I'm wondering what it was like for the people who weren't necessarily the pioneers at the forefront of radical research. Anyone want to contribute some thoughts and memories?

The picture is of Mt. St. Helens and Mt. Adams of the Cascade Range. These volcanoes are now known to originate from melting of the crust that occurs as ocean crust (and water) are carried beneath the continent at subduction zones. It was once thought that the extra weight of sediments accumulating on the edge of the continents pushed downwards on the crust to where the heat of the planet melted the deepest rocks.

I thought I recognized Adams and St. Helens. Yes, tectonics explains their magma source, but leaves an interesting question standing: Why are those volcanoes where they are? The Cascades have a fairly narrow axis of active magmatism, but St. Helens is quite a ways to the west off of that axis. I seem to vaguely recall that one proposed explanation is that the subducting plate splits in this area, so there may be two different slabs subducting at differing angles. I've always wondered if the existence of the Astoria fan- the sediment deposited at the mouth of the Columbia River, which has buried the trench- has caused more sediment and water to be subducted at this portion of the plate.

At any rate, as far as I know, I think the question you ask in the title still has no certain answer.

By the time I got to college geology during the late 80s plate techtonics was accepted. However I remember talking about the 60s controversy and still having to explain the process to visitors at St Helens during the early 90s. Not any more. People seem to get it now.

I was an undergraduate at Cambridge in the mid-60s (and yes, I do remember them). Holmes was my first textbook and from then on I was educated in one of the intellectual cauldrons of plate tectonics: Fred Vine and Drummond Matthews were doing the geophysics and Alan Smith (of Bullard, Everett, and Smith and the fitting of continents)taught me tectonics and many other things. John Dewey was finally ridding himself of his obsession with kink bands and beginning his tectonic career.

I emerged from this Cambridge in the late 60s and migrated for fresh academic air to the other one. And I was shocked to discover that, at least in some illustrious quarters, plate tectonic theory was dismissed and derided - yes, even at Harvard.

I finished up doing my doctorate back at the original Cambridge under the guidance and wisdom of Alan Smith, still a good friend all these decades on. The cauldron was still bubbling fiercely, stirred by Dan McKenzie, spiced by Dewey, quality-controlled by Smith. It was fascinating and stimulating time to be a graduate student on either side of the pond.

A fantastic book about the plate tectonics revolution is:

I got my undergraduate degree in the early 1970's, and was taught structure by an old-school prof who occasionally would tell us why plate tectonics was wrong, without giving us any background in what he was really talking about (other than continental drift ideas). We had no reason to think he was anything but right, and I don't remember any arguments. I thought the whole school was like that until I took a senior & grad-level course from the invert palaeontologist, who had no problem w/ plate tectonics. That's when I was first introduced to it, in late 1974. I was brought up to speed the next year at the USGS during a several-day course by Dewey and Pitman.