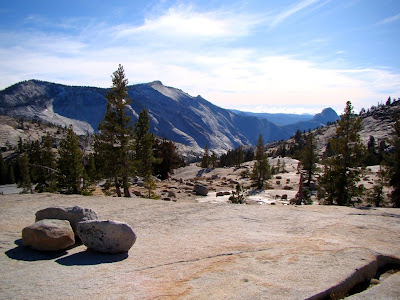 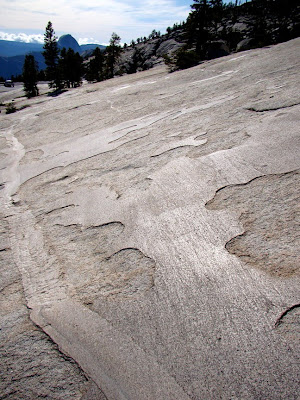 At the height of the ice ages in the high Sierra Nevada, an ice cap 2,000 feet deep covered the Tuolumne Meadows region. A massive 40-mile long glacier flowed down the Tuolumne River gorge, the largest in the Sierra, but tongues of ice crept over some drainage divides and flowed elsewhere. At Tenaya Creek, the glacier made a path into Yosemite Valley. Along the way, the glacial scouring smoothed over domes, ripped up boulders, and tore rocks from the base of cliffs, steepening them, most spectacularly at Half Dome.
One of Yosemite's finest vistas can be had from Olmsted Point, up the Tuolumne Road about eight miles southwest of Tuolumne Meadows. If Yosemite Valley lacks easily accessible features of glaciation, Olmsted Point has an embarrassment of riches. To the north (top photo), Tenaya Lake and Mt. Conness provide a nice example of a glacial tarn (lake) and a horn (a mountain peak "sharpened" by having rock plucked from the base of the cliffs below). The valley containing the lake has a broad U-shaped profile.
To the south, Tenaya Creek plunges deep into the gorge below Clouds Rest and Half Dome. The vast granitic face of Clouds Rest (center of second photo) is scored by dozens of avalanche chutes where masses of snow constantly clear off the rock and prevent trees from gaining root. Farther downstream, Half Dome looms over Yosemite Valley. Glaciers never covered the dome. It took its shape instead from the expansion of the granitic rock as it was exposed by erosion. The expansion took the form of fractures that ran parallel to the surface of the rock (exfoliation), which tends to remove corners and edges. Massive vertical fractures called joints allowed the glaciers below the dome to quarry the rocks from below, forming the stunning vertical face of the dome.
Up close, the evidence of the passage of glaciers is plentiful. Hundreds of large boulders, derived from somewhere upstream, litter the landscape (glacial erratics). The surface of the granitic rock has been scraped and scoured to produce glacial polish, striations, grooves and chatter marks (third photo). If you are more interested in the petrology, the glacial polish reveals incredible details in the granite: flow patterns, dikes, and pegmatite veins are visible everywhere, not to mention huge crystals of feldspar.
Olmsted Point is all about spectacular scenery, but there is much in the way of geological learning opportunities as well. On a field trip, it is not to be missed!
Posted by Garry Hayes at 3:04 PM

I really need to visit Yosemite. But not during winter when I'm off work. You're talking about my ancester, Fredrick Law.

Interesting to read how the vertical joints at Half Dome formed.
It was in Yosemite that I really got to practice my watercolors (I'm an oil painter) while the rest of the family hiked. Thanks for the info.

This is one of my favorite viewpoints.