Got My Own Shot This Time! Half Dome from the Central Valley 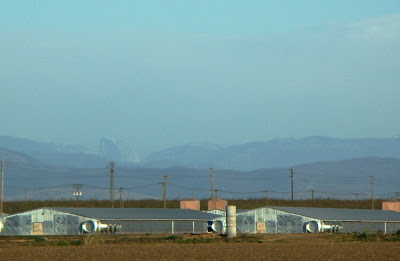 It's not as clear as Tony's, taken as it was from the backseat of a speeding car, but I have my own documentary evidence now of the visibility of Half Dome from the floor of the Central Valley. The question came up last February when a picture in the Patterson Irrigator seemed to show Half Dome rising in the far distance (something like 80 miles away). A hot discussion followed, and the photo by Tony Immoos pretty much settled the issue. I was pretty sure I had seen Half Dome from the vicinity of Keyes Road near Turlock a few times, but never had a camera with me on those unusually clear days.
We were on our way home from the Thanksgiving holidays, and just a few miles from the end of the journey, near the junction of Keyes Road and Oakdale-Waterford Highway, when I spotted a familiar shape. I grabbed the camera, put it on extreme zoom (about 30x), and snapped a few shots. I had to up the contrast, but the shape of the big rock is clear, a little bit to the left of center. I think it was more visible on this particular day, because the peaks behind the dome are obscured by the clouds of a retreating storm.

On a related note, I blogged last March about not quite knowing the names of the mountains visible from a road near my house. It turns out that by the map, I was looking straight into the heart of Yosemite National Park, and in fact almost directly at the peaks above Yosemite Valley. The pictures are too blurry to name the individual peaks, but thanks to Steve Cosner, I'll be ready when I get some clearer shots!
Posted by Garry Hayes at 9:09 PM

Awesome job, Garry! I guess you can see it driving down Yosemite Blvd. in Modesto too on really great days. We used to live on Leak Road and I remember my dad showing us from the 2nd floor landing of the old tank house at our house. Never new quite what he was talking about then. I do now!

Good to see others are seeing for themselves what I brought to attention in that original Patterson Irrigator photo I took, folks sometimes still doubt the ability to see Half Dome from Patterson, but I just refer them to my blog site. eliasphoto.blogspot.com... good stuff!

It's been a long time since you took a geology class Elias!

Just saw Half Dome today from Turlock Rd just west of Snelling. Didn't get a pic because it was late in the day with the sun setting but I have some good pics from last year in the same spot. I was skeptical myself till I saw it.