Mother Nature cries, and by the way, AFRICA IS GOING TO SPLIT IN TWO!!! 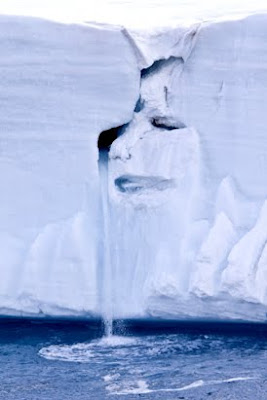 I see stories all the time of people who have seen the Virgin Mary in their toast or in a mushroom or something and I am plenty dismissive of such things, so this note from ABC News is especially interesting. Retouched? Who knows, but it is a beautiful picture and highly symbolic even if it is. As photographer Michael Nolan notes:

This is how one would imagine mother nature would express her sentiments about our inability to reduce global warming. It seemed an obvious place for her to appear, on the front of a retreating ice shelf, crying.

Meanwhile in other news of the day, AFRICA IS GOING TO SPLIT IN TWO!

Volcanic activity may split the African continent in two due to a recent geological crack in northeastern Ethiopia, researchers said on Tuesday.

If you are expecting a story of massive disruptions of the crust, giant tsunamis, magnitude 12 earthquakes, and millions of people dead, well, no the article doesn't do that. It is a half-decent attempt (and I mean "half") by a non-science journalist (or so I assume) to describe research going on in the Afar Rift, a region where the crust is splitting and moving slowly apart.

I'm a little disappointed that the editors let such a headline go by (I wonder HOW such a thing could happen?), and even more disappointed that it took until the last paragraph of the article to point out that the process they are describing would unfold over millions of years. I've often imagined that the whole misconception that California would fall into the Pacific during the "BIG ONE" started this way. Someone read a report describing how strike-slip motion on the San Andreas Fault would eventually move part of California into the Pacific forming an island, and somehow revved up the timetable from millions of years to a single earthquake. It has unfortunately become the one thing that everyone seems to know about the San Andreas fault.

No links were provided in the article, and it didn't help that the article misspelled the researcher's name (somehow 'Ayele' became 'Arefe'). I think the article also mistook 'magnetic' for 'magmatic' (my students do that sometimes). I finally tracked down the article, the citation is below, and the abstract can be found here.

I've been to this glacier. It is in Svalbard . It was many years ago but it didn't look like a face to me then. I suspect the image is retouched.