California Has Her Faults: A Field Trip along the San Andreas Fault System 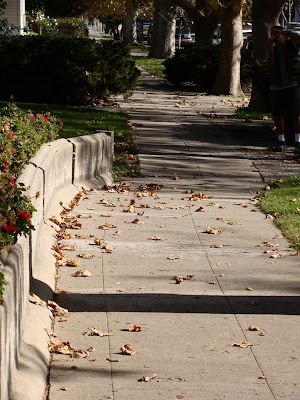 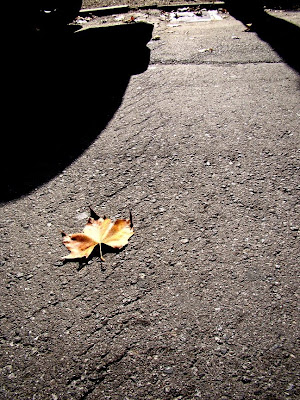 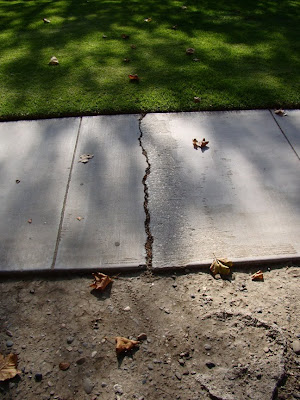 We are well into the fall, but California weather is, well, really nice (and please use the word "drought" quietly around here; it is a touchy subject). Although each week in the month of November brings more snow to the high country of the Sierra Nevada, the Coast Ranges can be visited all year, and so 15 of my students joined me Saturday on a tour of the San Andreas fault in the vicinity of Hollister and Pinnacles National Monument. The town of Hollister has been famous among geologists for years as an example of a place where active fault creep can be observed.
The Calaveras fault is part of the San Andreas system, and is closely related to the Hayward fault that tracks through the towns of the east shore of San Francisco Bay, including Oakland, Berkeley, and Hayward. Because the Calaveras fault in Hollister is creeping, it probably does not build up as much stress, and thus does not produce large earthquakes. Farther north, the fault is locked and building up considerable stress, and as such is capable of producing much more damaging earthquakes. A magnitude 7.0+ quake is not unlikely along this fault.
The retaining wall in the top photo has been used in many textbooks as an example of historical fault offset. The sidewalk and walls are probably 50-60 years old, and have moved a couple of feet. The house nearby is built directly on the fault trace, and year after year is increasingly stressed, to the extent that the foundation must be replaced every so often (they raise the house off the foundation to do the work). Note that the far side of the fault has moved to the right from the photographer's perspective. This indicates that the Calaveras is a right lateral fault, just like the San Andreas.
The street next to the retaining wall (second photo) was repaved within the last couple of years, but is already showing the effects of creep. The pavement is showing a series of diagonal cracks called riedel shears. Before long the surface will break into a single continuous crack.
The adjacent new sidewalk has already split, and has been repaired (third photo).
More information and details on the rate and pattern of fault offsets in the Hollister area can be found here and here.
Posted by Garry Hayes at 7:06 PM

Very nice examples of the drought, oops I mean fault. Hope you'll be sharing more of this tour.

Did you go to the winery that's offset by the fault? I think that's in (or near) Hollister.

We usually make our last stop of the day at the winery, but ran out of daylight this year. I'll probably pull a few pictures from the archives to show what happened there.