The Other California: The Prairie Lands 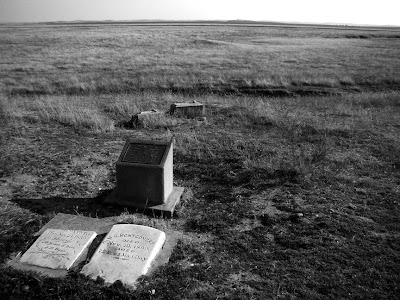 California is known for many unique landscapes, including renowned scenery like Yosemite and the Sierra Nevada, the Big Sur coastline, or the forbidding wastes of Death Valley. There are also, of course, the urban landscapes of San Francisco, Los Angeles and San Diego. But there are some places in the state that are rarely noticed or considered. I live on the edge of one of those unique places, the prairie lands that surround (and once covered) the Great Valley province. It is a lonely region, dotted by the occasional orchard or cattle ranch. These lands, for particularly geologic reasons, were never developed for agriculture the way the Central Valley was. Wandering the backroads beyond my small village is a journey back into California's past, before the wholesale transformation of the landscape into farmlands and urban skylines.

There are several distinct regions of prairies around our valley. Farther south, near Coalinga and Bakersfield, and adjacent to the Coast Ranges, the prairies are drier and more alkaline, more nearly a desert landscape. A portion of this region has been preserved as the Carrizo Plains National Monument, which I may describe in a separate post. It is also a great place to see the San Andreas fault!

The region in which I live is a transition zone between the rich agricultural soils of the Central Valley around Fresno, Merced and Modesto, and the rocky ridges of the Sierra Nevada foothills. The underlying rocks include alluvial fans that developed as muddy rivers flowed off the Sierra Nevada block during the ice ages, and some of the volcanic lahar deposits and ash flows that preceded the glacial times. Rivers have not flowed across these surfaces for tens of thousands of years since the ice last invaded the high country. This long period of chemical weathering has resulted in the development of a clay-filled soil rich in iron oxide and hardpan (caliche deposits). The occasional winter rains that we get cannot sink far into the surface, so the primary vegetation is grass and wildflowers. A few oaks dot the higher hills.

In historic time, before the ranches, these prairies were grazed by tule elk and pronghorn antelope. The pronghorns were hunted to extinction by 1920, and the elk that roam a few isolated refuges are descended from single pair found in Kern County in the 1920's. California grizzly bears also lived here. In much earlier times, prior to about 12,000 years ago, the fauna included horses, camels, bison, mastodons, and mammoths. Giant condors flew overhead. Sabertooth cats, dire wolves and American lions hunted the grazers. 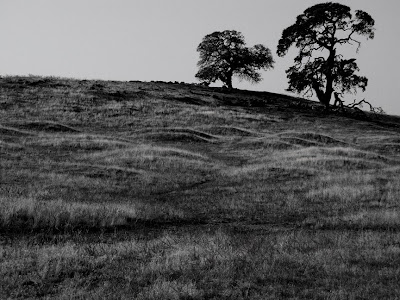 Some surfaces (as in the photo above) are covered by a regular pattern of small hummocks called mima mounds. Their origin is enigmatic, but is probably related to thousands of generations of ground squirrels occupying the same individual hills year after year. Other more exotic explanations involve Native American burials, odd earthquake waves, and periglacial soil activity.

The bottom photo shows the geological relationships in the prairie outside my town. In the foreground, the protruding rocks are part of the metamorphic bedrock of the Sierra Nevada, dating to Mesozoic time. These rocks were highly deformed and deeply eroded during the late Cretaceous and early Cenozoic, between 80 and 40 million years ago (approximate dates, and mildly controversial). The erosional unconformity is covered by ash flow deposits from about 22-28 million years ago that originated near the present-day Sierra Crest around 40 miles to the east (the Valley Springs Formation). The ash is in turn covered by voluminous lahar deposits (volcanic mudflows) of the Mehrten Formation, dating to around 9-11 million years. The lahars are probably responsible for the prominent ledges on the hillsides. 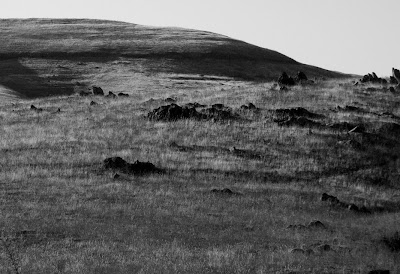 When I first came to live in the Central Valley, I didn't always appreciate the serene beauty of these wide-open landscapes. The geologist in me always wanted to see high mountains and steep-sided plateaus. The landscape has grown on me...the prairies are a special place.
And just wait til you see them in springtime. No black and white photos then! Have a good Thanksgiving holiday, if you live where it is celebrated. If not, give yourself a moment to think of the things you can be thankful for! And be safe in your travels...
Posted by Garry Hayes at 10:56 PM

Enjoyed the post. I traveled the Great Plains and didn't appreciate it until I started reading the geology & history. Even seemingly uninteresting areas can be enjoyable and have their own beauty. Plus there you can find some true solitude sometimes, lol. Happy Thanksgiving! /s/ Osprey

I will look at these CA praries differently now Garry. Of course every place has it's own unique beauty. Yet I know what you mean about looking at the big rocks.

Love this post. One summer I crossed the Valley every weekend, through Modesto to Lake Don Pedro, and there's a lot going on in the Great Valley.

What a fantastic post! I found your blog earlier while researching the mudslides around Wrightwood, and I am hooked! Thank you for posting these informational things! Every time I drive through these foothill grasslands I am captivated by them, and how the oaks become increasingly dense the higher you go. It's a shame that so much of this land is private property, I would love to hike here more