Getting hosed in the Mother Lode: Columbia 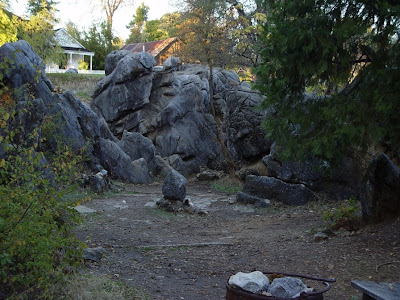 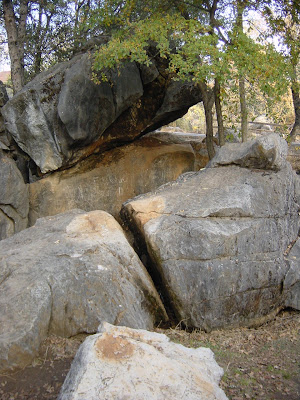 A recent post included a description of the hydraulic mining that took place in the Sierra Nevada Mother Lode here in California. We visited some of these sites on our recent field studies exploration of the gold mining region. The last stop of the day was at Columbia Historical State Park, where in the last rays of the setting sun we took in one of the more unusual "ghost" towns of the Mother Lode.
First off, it is not really a ghost town, as several thousand people live in the area, and the region supports a community college that is part of our district. It is, on the other hand, one of the best preserved towns of the Gold Rush era. After it burned down a few times early on, the inhabitants caught on that brick might be a better construction material than wood, and so a rather large selection of 1800's vintage buildings survive. Museums, stores, and restaurants, even an old-time theatre are available for tourists.
For we geologists, and for children (is there a difference?), the town has a special treat: big rocks! What's the story here?
In Paleogene time (I still like saying "Tertiary time"), the Sierra Nevada was a vastly different place. The mountains were lower, and large rivers traversed the landscape in shallow valleys. Flowing across the Mother Lode quartz veins, the rivers picked large amounts of gold, and carried it downstream. A particular channel, the Tertiary Calaveras River, flowed across an exposure of marble, part of a metamorphic exotic terrane called the Calaveras Complex.
Marble, like limestone, is composed of calcium carbonate and is easily dissolved by slightly acidic water. Over the millennia, caves developed underground, and the surface was punctuated by sinkholes and blind valleys, features typical of karst topography. The surface rocks were extremely uneven with deep crevasses and cracks. The rough surfaces acted like riffles where the river passed over, trapping vast amounts of placer gold.
Much of the surface around Columbia and nearby Rawhide Flat is composed of these unusual looking rocks, pictured above. But Columbia itself sits atop a flat shelf around 15 to 20 feet higher than the bouldery surface. Why?
It turns out that the town sits on a section of the original soil surface that existed before the hydraulic miners attacked the rocks in the area. Before the miners arrived, the boulder outcrops were not visible, as they were buried in clays, soil and river deposits. Once the miners figured out that huge amounts of placer gold occupied the cracks and fissures, they pursued the riches with wild abandon, spraying away the soil and sediment, ultimately recovering between 3 and 4 million ounces of gold (think $3 to $4 billion at today's gold prices!). It has been called one of the richest single placer deposits in the entire world.
The miners worked their way right up to the very edge of town, and I have heard that occasionally buildings would burn down under suspicious circumstances. Instead of rebuilding, the site was mined instead.
The town is a pleasant place to visit, and the Candy Shop comes highly recommended. Be aware that because of the California state budget mess, parts of the park are shut down to save some piddling amount of money for the state. For instance, a number of the park bathrooms are locked up. I don't know the present status of the museum.
Posted by Garry Hayes at 10:37 AM