A Volcano Sundered: A Field Trip Along the San Andreas Fault IV 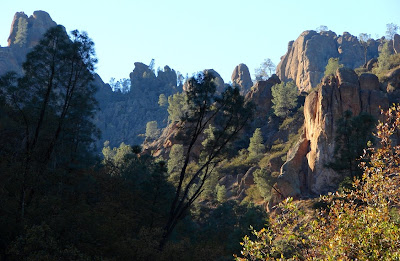 One of California's hidden treasures is Pinnacles National Monument, in the Coast Ranges south of the town of Hollister. It was the main destination of our field studies class last week as we explored sites along the San Andreas fault. Some of our other stops were described here, here and here. The park was established by Theodore Roosevelt in 1908, to preserve the unusually rugged scenery that is quite unlike that of most other parts of the Coast Ranges. The surprising geological significance of the park was not discovered until a half a century later. 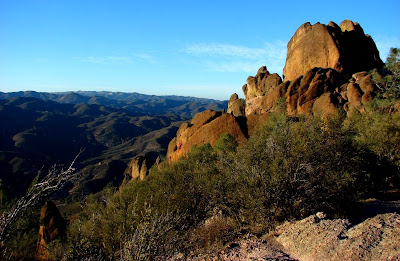 I described the geology of the park in some detail last year, so I won't repeat myself too much, but essentially the park is half of a rhyolitic composite volcano that erupted 23.5 million years ago...right on top of the San Andreas fault! The rhyolite weathers into the beautiful spires and peaks that are the centerpiece of the park scenery. 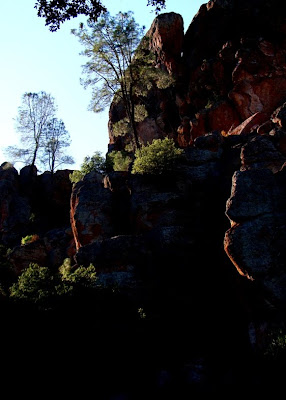 In the 1970's, geologists were looking to understand the nature of movements along the San Andreas fault, and some of them noted the apparent similarity between the Pinnacles volcanic rocks and those of the Neenach Volcanics down in southern California near Palmdale and Gorman. V. Matthews was able to demonstrate that they erupted from the same volcano, but that the rocks were separated by 195 miles by movements of the San Andreas fault. The discovery was a powerful confirmation of the possibility of large-scale motion of the crust of the earth.

Because of the crap going around today about the end of the world and 2012 movies, I feel duty-bound to point out that this 195 miles of movement was accomplished by thousands of individual earthquakes happening once every few hundred years, with 10-20 feet of motion during each earthquake. Such earthquakes are likely in the near future, and they will be disasters, but they will not be anything like what goes on in Roland Emmerich's imagination, as entertaining as his movies may be!
Some classic papers: