The Other California: Geology and our State Symbols, Part IV 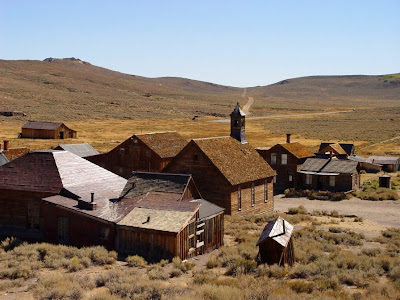 The lands to the east of the Sierra Nevada are barren. In the rain shadow of the High Sierra, the hills to the east are dry, mostly treeless, and to many people, not particularly scenic or beautiful. During my days as a graduate student at University of Nevada, Reno, I came to have a different view. When trees are few, the trees that do exist take on a beautiful individuality. When a landscape seems monochrome, the eyes start to see the contrasts in the many shades of gray and green. Still, with hot summers and bitter cold winters, it doesn't seem to be the kind of place anyone would choose to live. But other factors come into play: the geologic history of these lands, the interplay of volcanic activity and the movement of faults and groundwater conspired to bring about the emplacement of gold in these barren hills.

In the decades following the fabled Gold Rush, hungry miners started to explore these regions, and a lucky few found the elusive metal. W. S. Bodey was one of these; his exploration party found gold in 1859 in the hills between Aurora and Mono Lake, a plateau region averaging 8,000 feet above sea level. He may have found the gold, but he wasn't lucky. He froze to death the following year while making a supply run near Mono Lake.

The mines took some time to take off. The discovery of a rich lode in 1876 led to the development of the Standard Mine, and thousands of people came to the town of Bodie (renamed for pronunciation purposes). The population peaked at 10,000 in 1880. The town developed a fearsome reputation for lawlessness, and one legend declared that a young girl, finding that Bodie would be her new home, said "Goodbye God, I'm going to Bodie". The town had its pride, too: an editor of the town newspaper insisted the punctuation was wrong; she had really said "Good, by God, I'm going to Bodie". 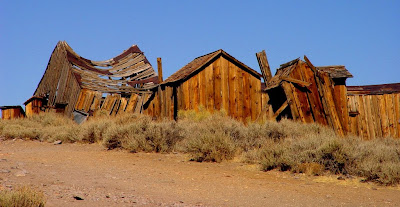 The mines were active for years, producing $34 million in gold (at a mixture of prices, $20/ounce in the 1800's and early 1900's, and $36/ounce in the 1930's). The gold is worth a great deal more at today's prices, perhaps $1 or 2 billion. As time went on, gold production waned, and the town began to die away. The Standard Mine (visible in the window reflection in the picture below) shut down in 1913, although sporadic efforts at mining continued through 1942. A disastrous fire in 1932 destroyed most of the buildings in the town (only 167 of the original 2,000 buildings remain). 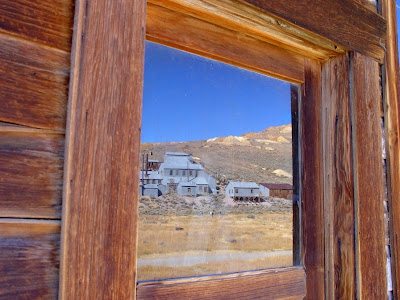 By 1962, concerns over vandalism led to the establishment of Bodie Historical State Park, and today the town is maintained as it is, with no new construction, and limited efforts to prevent damage to the remaining buildings (they call it "arrested decay"). The wood buildings have been windblasted in the severe winters, providing tourists with practically unlimited photographic opportunities.
When the price of gold rose to atmospheric levels in the 1980's, interest grew in resuming mining at Bodie (despite the establishment of the state park, the mining claims were still valid). I remember some slick PR types visiting the surrounding communities in the 1980's promoting the jobs the mines would bring to the region. The new mines would of course require the removal of most of the mountain along the back of the town, and blasting and road traffic would no doubt damage the historic buildings. In the controversy that ensued, the state acted to remove the land from mineral speculation. Now the only threat to the park is the current state budget crisis.

It was mildly surprising to me that Bodie would be the pick for the California State Gold Rush Ghost Town, given how many historic towns line the Mother Lode in the Sierra Nevada foothills (actually, until I started this series I didn't even know California had an official ghost town). On the other hand, the competition and politics would have been deafening. As it was, controversy did ensue, as southern California pushed for the inclusion of another ghost town in the Mojave Desert (see my next post). After some compromises the state legislature elected to declare a "gold rush ghost town", and a "silver rush ghost town". Bodie received its designation in as the gold rush town in 2002.
If you are ever on Highway 395 between Mono Lake and Bridgeport, do not miss the side excursion to Bodie. Although part of the access road is unpaved, it is usually not a problem for passenger cars (winter is a different story). You won't regret it!
A great resource on the establishment of Bodie as the state symbol can be found here. It links to some other excellent resources.
A 1986 California Geologic Survey report on the geology of Bodie can be found here (also linked above).
Posted by Garry Hayes at 11:40 PM

What an golden place to explore. Glad it's been preserved and won't allow more mining. Who'd have thought there's a state ghost town or two. I may have to steal this whole idea for the state of AZ.

Glad you liked my Death Valley series. did go past Natural Bridge and the rock is amazing. Sounds like another great field trip. Can I audit? LOL!

Great place to explore. I at first thought of Mother Load towns too.

It sort of looks like a criterion was that the place be protected as a park. If so, there are a couple of Mother Load sites that might have been runners up: Columbia and Malakoff Diggins (both state parks, too).

Couple of other interesting Mother Lode spots that are fun to visit on a day trip include Folsom Powerhouse (first long-distance - to downtown Sac - hydroelectric plant), and Gold Bug Mine in Placerville.