Dispatches from the Road: Pictures I Missed Before 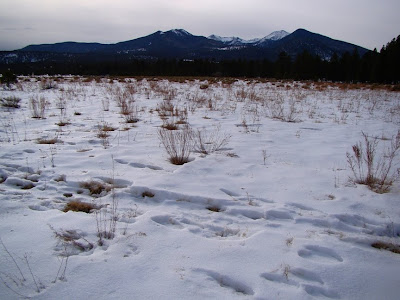 Nothing of great consequence, but I got some pictures on our holiday journey that I wished I had a few months ago. Our road took us through the San Francisco Peaks Volcanic Field, which I discussed in my series on the geologic history of the Colorado Plateau. I had a post on the volcanoes, but my photo archives revealed hardly any usable shots of the San Francisco Peaks (I borrowed some photos from the USGS). As we drove from Grand Canyon to Flagstaff on Highway 89, we passed the massive stratovolcano, topped by Humphreys Peak, which at 12,643 feet is the highest point in Arizona. The mountain, seen above, has a massive east-facing basin that may have formed in the same explosive manner as the crater at Mt. St. Helens. Prior to the destruction of the peak, it may have been the highest mountain in the contiguous United States, at something over 16,000 feet.

The meadow in the foreground lies along the entrance road to Sunset Crater National Monument, which preserves one of the youngest volcanic features in Arizona. A look east from the same meadow reveals Sunset Crater itself. 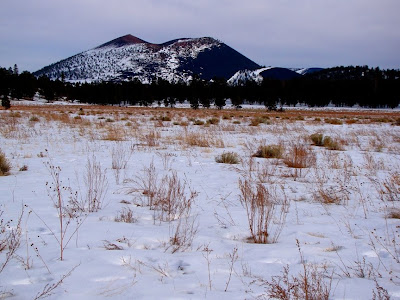