The Other California: A Friday Fun Foto! 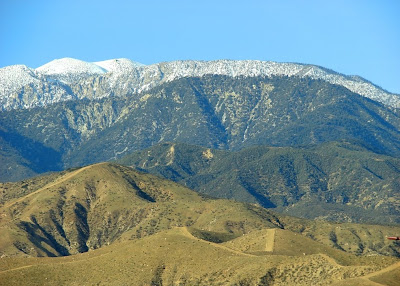 Here's hoping your holiday was a "transformative" experience! In honor of the concept, I present a Friday Fun Foto: What mountain is this?

Merry Christmas and happy holidays to all! Thanks to Susan Hayes for the photo.

UPDATE: As Chasmanian Devil and Forrest noted, it is San Gorgonio Peak, the highest mountain in Southern California at an elevation of 11,499 feet. The mountain shrunk three feet over the course of my life, as I grew up in SoCal with the highest point being officially 11,502 feet. It got too heavy, or else the surveying methods improved! San Gorgonio is a fascinating place to hike, especially if you like wilderness: many people follow the trails to the summit, but some wonderful lonely trails explore the flanks of the peak, especially at the headwaters of the Whitewater River. It was glaciated in the Pleistocene ice ages, and recent research has established the precise glacial chronology. It even has a few natural lakes, a rarity in southern California mountains. It's a place I am anxious to get back to! I highly recommend a book by Stephens Press called Call of the Mountains, a beautiful photo-essay about southern California's mountains.
Posted by Garry Hayes at 11:17 PM

Not sure but could it be San Gorgonio?

Thought it looked familiar. I enjoyed seeing this from San Jacinto Peak once. I hope to return and see some more of these interesting mountains soon.