The Other California: Geology and the other State Symbols II 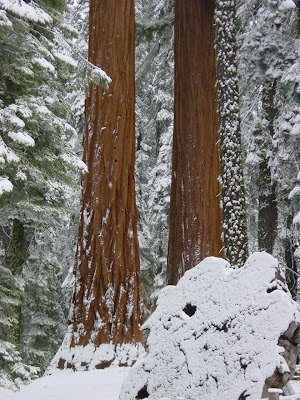 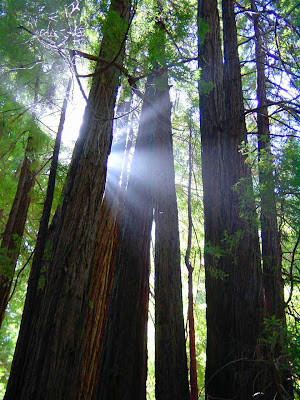 California is a landscape of superlatives and extremes: the highest and the lowest points in the lower 48 states (Alaska: why do they leave her off these lists??). It has the hottest and driest deserts in North America, less than a day's drive from a contender for one of the snowiest places (Bear Valley once got 70 feet of snow in one year). We also have the oldest, tallest and biggest living things in existence, the Bristlecone Pine, the Coast Redwood (Sequoia sempervirens), and the Giant Sequoia(Sequoiadendron gigantea). The latter two of these trees are the California State Tree. Confusing? It turns out that the state legislature established the "native Redwood" as the state tree in 1937. But they didn't define what the "redwood" was: it took a decision by the state Attorney-General in 1951 to declare that both trees were the state tree. This was confirmed by the legislature in 1953.
The Coast Redwoods are the tallest trees on the planet, with the current record-holder reaching 379 feet. They grow in the central and northern Coast Ranges, from Big Sur to just beyond the Oregon border. The durable wood is highly valued and lumbering has been going on for more than a century, so that only about 4% of the original old-growth forest remains in California. Efforts to preserve these remaining tracts have at times been controversial, but several beautiful national and state parks protect some of the remaining trees.

The Giant Sequoia is a related species that exists today in 60 or so groves in the middle elevations of the western slope of the Sierra Nevada. These trees, though shorter (270 feet or so) are the largest living things in existence. The trees have massive trunks, sometimes more than 50 feet across, and the largest contain in excess of 50,000 cubic feet of lumber, enough to build 5 homes. The wood is too brittle for such use, and instead entire groves have been cut down to produce...grape stakes and pencils. Nearly all the remaining groves are now protected in state and national parks/monuments.

A third species, the Dawn Redwood survives in China, in a single grove of no more than 5,000 trees that was discovered in 1944, and described in 1948. It had been thought to be extinct in the Miocene epoch.

Although these trees are biological entities, they have a geologic aspect as well, that I discussed in a post some time ago. In short, the Sequoias and Redwoods have existed as a genus for 200 million years or more and once existed in groves across North America, Europe and Asia. The trees of Petrified Forest National Park were probably a related species, and I have this wonderful image in my mind of dinosaurs wandering among the giant trees. Yellowstone National Park has a series of Sequoia forests preserved in stone as well, dating to 30-40 million years ago.


Other species of redwoods were apparently wiped out elsewhere in the world by climate change, especially the Pleistocene ice ages, but in the Sierra, they survived, barely, by propagating up and down the gentle western slope of the mountains as the climate alternated between glacial and interglacial periods. Some pollen work suggests they may have been on the very verge of extinction, but luckily for us they survived, and now are appreciated as the largest living things on the planet. I suspect the Coast Redwoods survived the ice ages protected by the moderating effects of the nearby Pacific Ocean.
Posted by Garry Hayes at 2:19 PM

Wow, another great post and a reminder why I love reading your blog. If I was 30 years younger I'd hope to be in college with you as my professor. I'm currently re-reading "The Wild Tree", Preston's great book about giant trees, so your post was most appropriate. Thanks.

Good thing these sequoia are adaptable or we wouldn't know their living majesty. And no wonder when I've walked thru the northern Redwoods I feel such antiquity. Plus I'm sure I've seen little people peeking out at me. Now I try to imagine endless sequoia forests across the land.
Great post Garry.

Thanks for the comments. Chas (can I call you "Chas"?), the Wild Trees was a GREAT book! I learned a lot about the big trees, but even more vivid was the stories of the researchers: teenagers climbing hundreds of feet into the trees without ropes, a researcher falling 90 feet out of a redwood (and surviving), and the whole group spending the night in the crown of a giant 1,500 year old redwood, only to find that it toppled only a month later!