Greetings from the Road: Mojave Desert 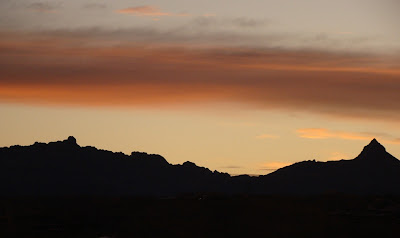 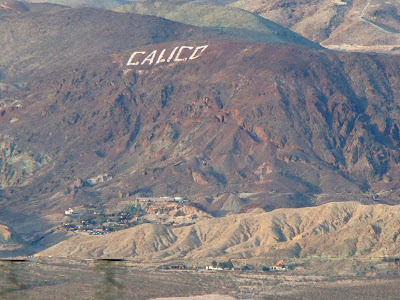 Holiday greetings to everyone! We're on the road to various locations in Arizona and Southern California, so posting might be sparse the next few days.

Having done several posts on the Calico Mountains, I realized I had no distant shots of the mountains, so I snapped a couple from Highway 40 outside Barstow. Calico makes its presence known with the logo across the mountaintop. The actual village is at the lower left, behind the light-colored foothills, which are composed of the Barstow Formation. The Calico fault zone passes behind the hills as well. More on the Barstow in a future post. The red and gray rocks making up the core of the mountains are late Miocene volcanic rocks.

The sunrise is courtesy of the fourth floor of Harrah's in Laughlin. I love the mountains in the vicinity, which are composed of rhyolite tuffs, but I don't know the age. I try to spend more of my time outdoors while taking advantage of cheap rooms and meals!
Posted by Garry Hayes at 1:06 PM

Nice sunrise. I like Laughlin for the cheap rooms. If you get near Prescott or Yarnell drop a note.
Merry Christmas to you and yours.