America's Never Never: North Rim or South Rim? It's a Grand Canyon everywhere, does it matter? 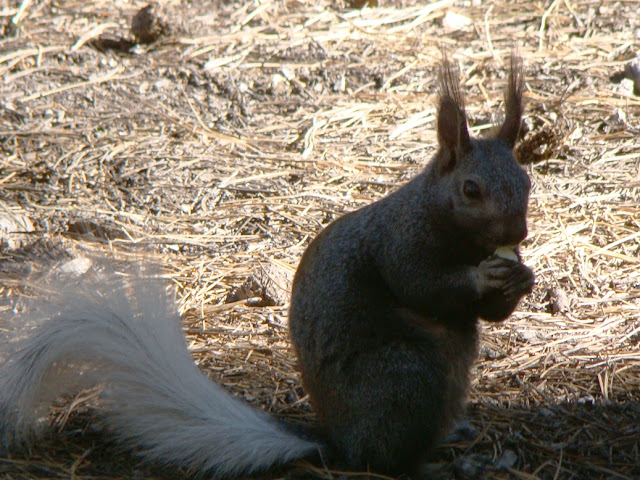 It means a lot to these guys anyway. The Kaibab Squirrel is a (sub)species of squirrel that lives only in the ponderosa forests of the North Rim of Grand Canyon. The most closely related species is the Abert Squirrel that lives on the South Rim of the canyon (and other parts of the Colorado Plateau), and never do the twain meet. The populations became separated at the end of the last ice age, and geographic isolation in different climates has led to differences between them. 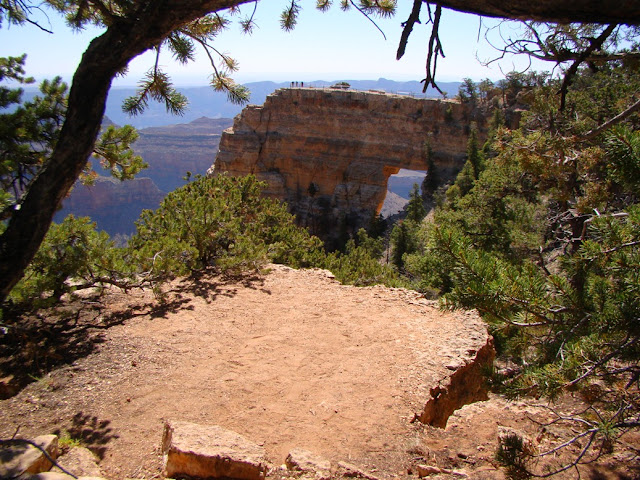 We continued our exploration of America's Never Never, arriving at the North Rim of Grand Canyon National Park (after making our way through a herd of buffalo). I've been using the term "Never Never" after a region in Australia that is far off the beaten track, though full of fantastic geologic scenery. In a similar way, the Colorado Plateau is largely a barren wilderness, but it also encompasses some of the most beautiful landscapes on the planet. And some corners can hardly be described as isolated and lonely. Grand Canyon is one of those places: it gets as many as 5 million visitors a year.

It's a grand place, and one can choose to visit the developed parts of the park on the North Rim or the South Rim. One might wonder if it makes much difference which rim to visit if one is visiting for the first time. It's an interesting choice. 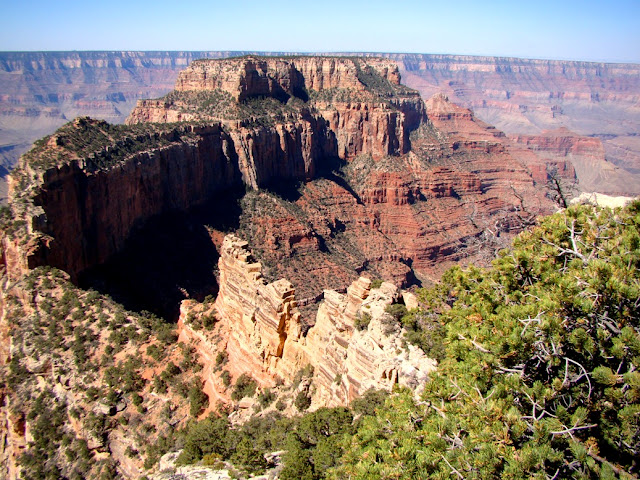 It really depends what you are after. If you are after the complete "industrial tourism" experience with IMAX theatres, four-star hotels, fancy visitor centers and complete visitor services including grocery stores, curio shops, restaurants, and full cellular service, then maybe the South Rim should be your destination. It is in fact the destination for something like 90% of the people who visit the canyon.

The North Rim is the flip side of the Grand Canyon experience. It usually takes several hours more to get there, and the nearest town of any sort is more than an hour away. There is a single hotel complex offering cabins, and a simple camp store. There is a one room visitor center, a laundromat/shower house, and not much else. What is the serious tourist to do? 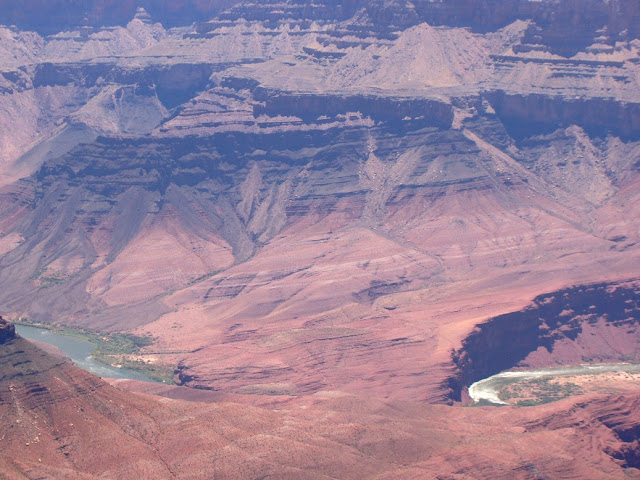 In my mind, there's not much of a contest. I enjoy my visits to the South Rim, but I prefer the quiet and the coolness of the North. It is as much as a thousand feet higher than the South Rim, and instead of a dry pinyon forest with occasional ponderosa groves, the North Rim has meadows with extensive forests of ponderosa, fir and aspen. The road to the viewpoints on the Walhalla Plateau is rarely crowded, and the viewpoints are stunning. Cape Royal and Angels Window offer excellent views of the Proterozoic Grand Canyon Supergroup and the famous angular unconformity that separates it from the overlying horizontal Paleozoic sediments (above). 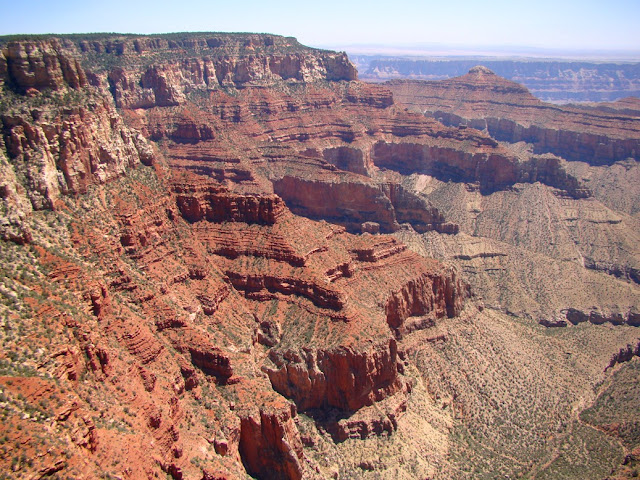 Point Imperial offers a unique perspective on possible origins of the Grand Canyon. It looks over the edge of the Butte Fault and East Kaibab monocline into the lower country to the east. The Colorado River comes from this lowland and crosses the 8,000 foot high plateau heading west. The question that geologists have been struggling with for decades is how the river could have done it. There are many ideas, and few conclusions. 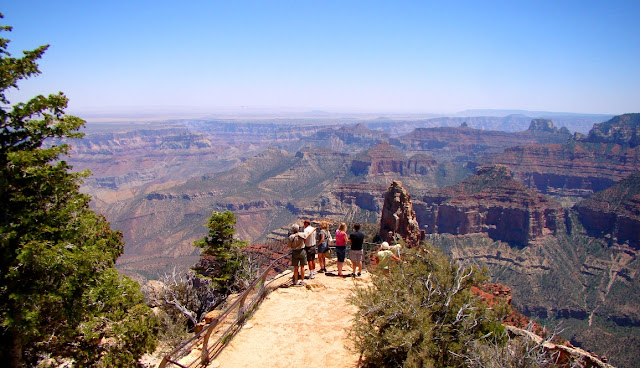 And then there are the quiet walks along the rim. The Widforss Trail goes five miles past the head of a deep gorge called the Transept, and to a beautiful view down into the Granite Gorge. The Uncle Jim Trail loops out to Uncle Jim Point at the head of Bright Angel Canyon. And if you aren't feeling particularly ambitious, follow the Transept Trail from Bright Angel Lodge to the Campground. That's what I did with my free time that day (oh, not to mention the pizza at the deli; it's not a completely savage wilderness). 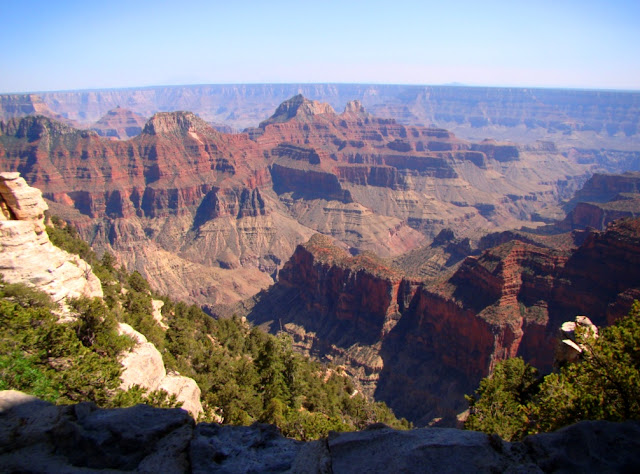 Anyone on the North Rim should walk the short distance to Bright Angel Point. You'll have company, but the view is memorable. A fairly large number of people walk the Transept, but on the day I was there, I shared the trail with just four other people. It was quiet, cool and beautiful. I've never been closer to California Condors than here along the trail. They hang out, waiting for a tourist to drop I suppose. 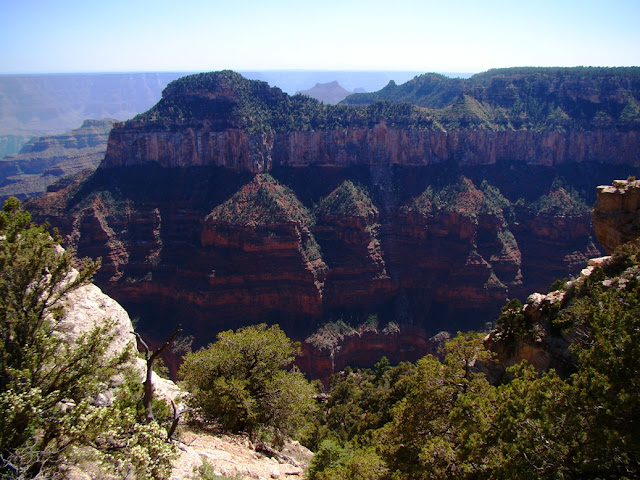 In any other setting the 3,000 foot deep Transept would be a national park in its own right. Here it is but a tributary to Bright Angel Creek, which is a tributary to the Colorado River. The trail follows some gentle ups and downs through shallow swales and passes a modest Ancestral Puebloan ruin. 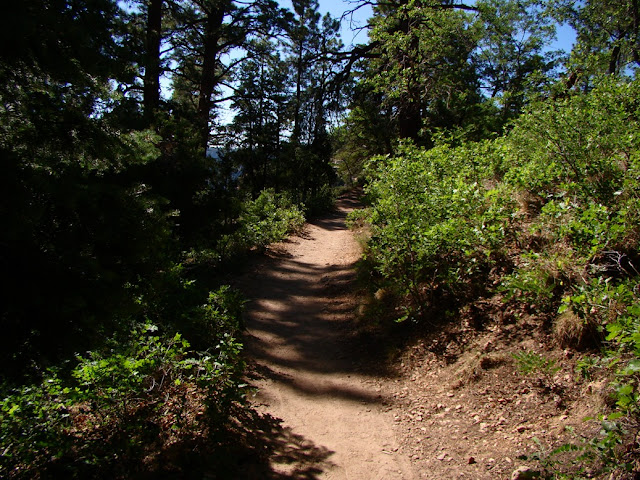 The campground is perched almost on the edge of the Transept, and the best-situated campsites offer views, but scenery is a short walk in any direction. It is a wonderful place. 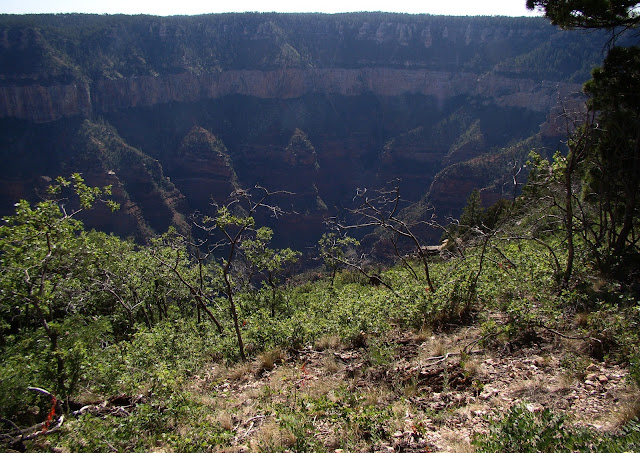 This discussion of North Rim vs. South Rim leaves out a lot of other possibilities...there is the drive through the Hualapai lands to the bottom of Grand Canyon at Diamond Creek or that strange glass walkway perched on the rim of the western Canyon. There is the road that accesses Hualapai Hilltop and the isolated village of Supai. There is the road out to Toroweap and Vulcan's Throne. There is the wilderness of the Shivwits Plateau out west, a "twin" to the Kaibab Plateau with barely a road or trail anywhere. And there's that totally opposite way of seeing the canyon, from the bottom looking up rafting along the Colorado River, an adventure I am eagerly awaiting in less than two weeks.
Posted by Garry Hayes at 1:28 AM