Okay, maybe a few people have chosen to take pictures of the scene above. The view of McWay Falls in Julia Pfeiffer Burns State Park along the Big Sur Coastline of Central California is iconic. It is pretty much visible from only one trail and overlook, since the beach is (quite properly) closed to visitation (try googling an image from any other angle). But is there a prettier waterfall anywhere? 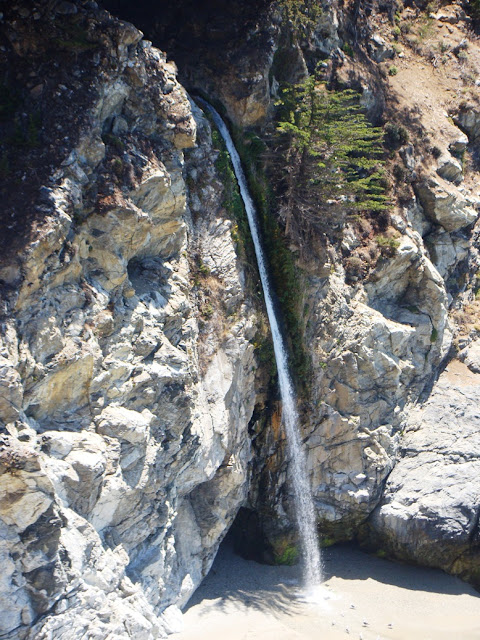 Actually, though, the proper name for McWay Falls is a tidefall, since during high tide the water falls directly into the sea (only two waterfalls in California do this, and only a few dozen in the world). Taking the longer view, it's not hard to see how a waterfall here could drop into the sea. The Big Sur Coastline is a mountain range that falls directly into the sea. The Santa Lucia Range reaches elevations of more than a mile, and at Julia Pfeiffer Burns State Park, a 4,000 foot high peak is only two miles from the beach as the crow flies (or falls). 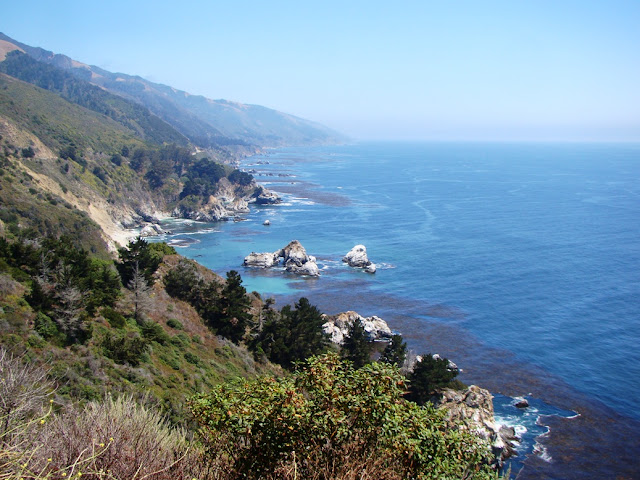 The Santa Lucia range and the rocks along the coast are part of the Salinian Block, an assemblage of granitic and metamorphic rocks that is related to the Sierra Nevada. The rocks formed in a magmatic arc several hundred miles to the south. They were carried north during the last 29 million years by movements of the San Andreas and related fault systems. The combination of tough, hard-to-erode rocks and rapid tectonic uplift has turned the Big Sur into one of the most beautiful coastlines in the world.
McWay Falls and the cove it is in are not pristine wilderness. The land was in private hands for many years, and there was once a house where the viewpoint is today. The owners planted palms and eucalyptus, as well as numerous other non-native plant species. The park is in the slow process of removing the invasive species. I'm not against the idea. There is a redwood grove just up the canyon (McWay Falls is very close to the southern edge of the natural range of the trees). It's hard to imagine humans improving the natural vegetation here.

There have been geologic changes here too, and in a sense they are "non-native" as well. The construction of Highway 1 through the Big Sur country was completed in 1937, and the steep topography necessitated making roadcuts into inherently unstable slopes. Mass wasting would be a fact of life here, but a major paved highway would only make the situation worse. The highway has been shut down for months at a time while landslides were mitigated.

I am guilty sometimes of ignoring interpretive signs on the assumption that I supposedly know more than the sign-makers (a poor assumption, actually). The picture below (from a sign at the overlook) shows McWay Falls as it appeared prior to 1983. The cove was full of seawater, not sand! What happened? 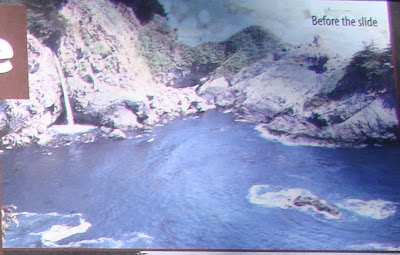 In 1983, a huge mass wasting event shut down Highway 1 just north of the park for nearly a year, and repair crews dumped 8 million cubic yards of debris down the slopes below to stabilize the highway. Wave action immediately began carrying the debris south along the coast, forming sandy beaches in the protected coves where there had been no sand before. The slope is still contributing massive amounts of sand to the coastal system (the yellowish debris on the right in the picture below). 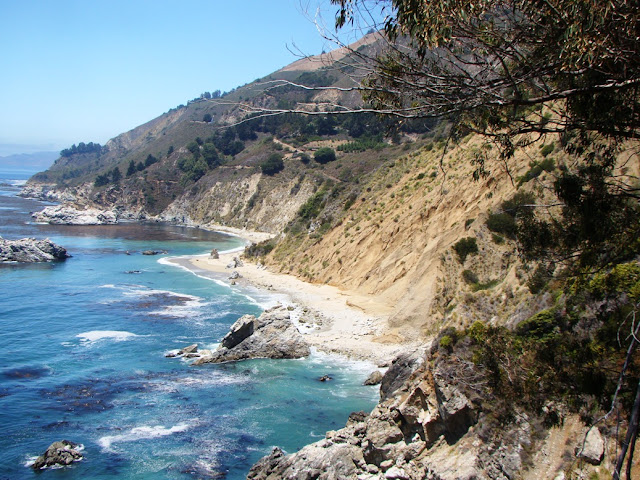 In a few years or decades, the loose debris will have been carried off and wave action will start removing sand from the coves. Some geological changes happen on human timescales. 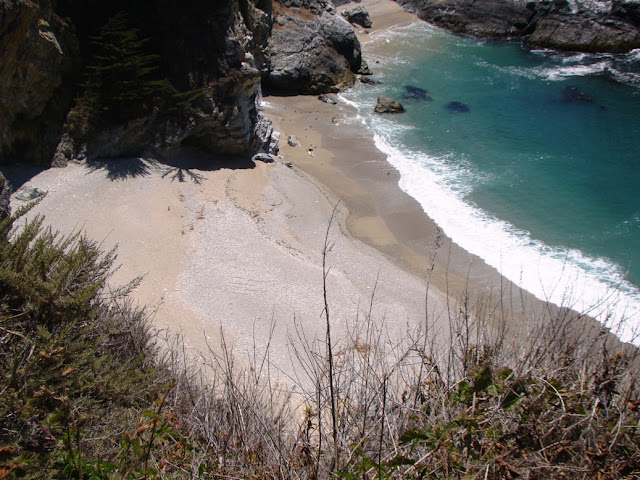 Julia Pfeiffer Burns State Park is on the Big Sur Coastline about 37 miles south of Carmel on Highway 1. Walk-in campsites are available, and a major campground can be found 12 miles north at Pfeiffer Big Sur State Park (we had a pleasant stay there during our visit this week). The park has several trails to explore beyond the overlook.
Posted by Garry Hayes at 9:50 PM

Garry, when I visited that area, i was struck at how unlikely the course of the creek was. Isn't it weird how it hugs the south side of the canyon? And appears to have abandoned its older channel in the middle of the canyon?

It's REALLY funny you should ask that. I was having a bit of a time of it myself trying to figure out if the course of the stream has been altered or not. You are right, it looks like the stream should go into the back of the sandy cove. I also noticed that the ridge that diverts the stream to the fall is made of boulder material, not bedrock. And, the 1959 topographic map shows the stream flowing into the back of the cove, not over the fall. Highway 1 construction forced a great deal of debris into the path of the stream and the water runs through a culvert, not under a bridge into the present channel. Wikipedia (but no one else) suggests that the people who owned the "Waterfall House" might have done some re-engineering of the creek location to make their view nicer. Perhaps....