I'm sure no one needs to be told that visiting Las Vegas is a surreal experience. I can't even begin to imagine the army of psychologists who through the years have advised casino owners on the best ways to separate tourists from their money. I've been appalled at the... well, I can't come up with any term better than excess. Las Vegas serves as a fine definition of the word.

I wonder what the point is of seeing the canals of Venice, a circus, New York, and the Egyptian pyramids when one could presumably see the real thing? One of my stranger experiences was the time I left the South Rim of Grand Canyon and arrived at a casino decorated as...the Grand Canyon. Complete with animatronic deer and raccoons. And plastic pine trees.

And yet, strangely enough, one can explore the Grand Canyon in Las Vegas, at least in one sense, and more easily than one can in the National Park. Our journey through the American Never Never took us from the Mojave National Preserve to Sin City because of the access it provides to the Proterozoic and Early Paleozoic rocks that in the park are only found deep in the canyon at the end of a hugely strenuous hike.

Frenchman Mountain rises east of the city, at the boundary between the city limits and the Lake Mead National Recreation Area. The mountain mostly falls under the jurisdiction of the Bureau of Land Management, which for decades let the land languish as a shooting gallery and trash dump. Geologists have known for years (especially since the 1960s publication of John Shelton's Geology Illustrated) that the rocks exposed on the flanks of the mountain were the same as the formations found in the deepest part of the Grand Canyon. One can easily lay one's hand across 1.2 billion years of geologic history at the exposure of the Great Unconformity (it's at my feet in the picture above, sloping up to the right). One can see the cross-bedded sandstones of the Cambrian Tapeats Formation, the remains of a shallow sea that transgressed across the western margin of the North American continent. And in the small canyon above these exposures, one can pick out trails, burrows and the discarded carapaces of some of the earliest complex life forms to be found on our planet, from the Bright Angel Shale. 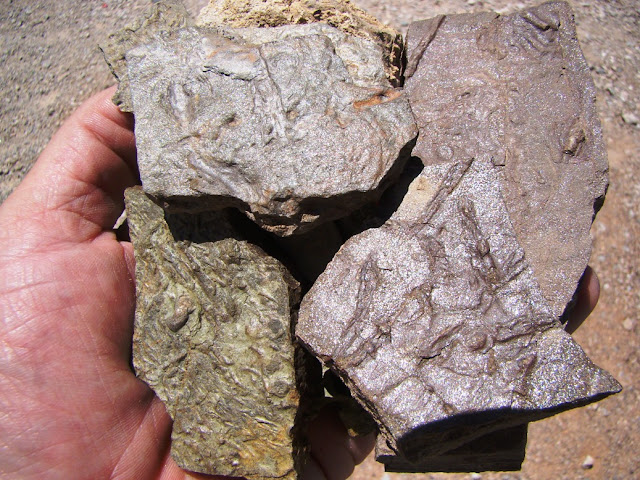 It is an interesting story just explaining how rocks of the Grand Canyon came to be exposed here in the Las Vegas Valley. In short, the rocks were transported 50 miles westward by extreme extensional faulting in Miocene time, around 23 to 6 million years ago. A major detachment fault system is presumed to underly the region (below).


It's an important and significant geologic locality, one that would be worthy of an interpretive sign and trail. In the 1990s, students and volunteers associated with the University of Nevada, Las Vegas put in a tremendous amount of work to construct such a site. It was very nicely done, with a brick walkway, sturdy interpretive signs, and a short nature trail.

But no good deed goes unpunished. The site was in place by 2001, and within a few short years it was completely obliterated by vandals. It sickens me beyond words that such people exist who feel compelled to destroy the good works of others. 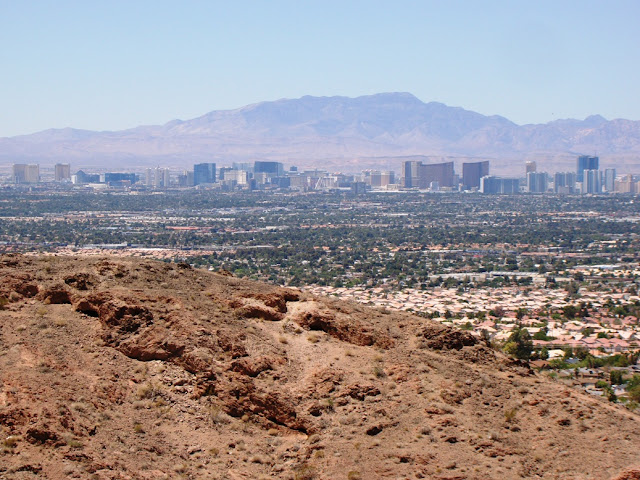 Still, it is a great place to visit and learn a bit of geology. The signs are gone, but so is most of the trash and garbage, and a walk up the hill provides a stunning view of the most unlikely city in existence. Download the information from the UNLV website at http://geoscience.unlv.edu/pub/rowland/Virtual/virtualfm.html and you won't need the signs anyway. 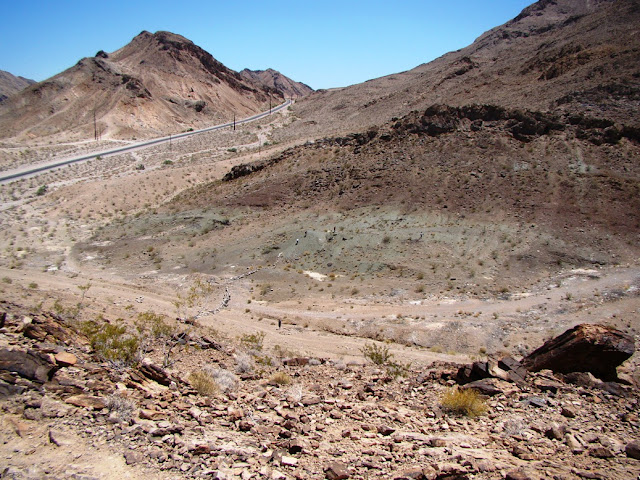 Next time you find yourself in the city of casinos, here is something you can do that doesn't remove money from your pocket! Check it out...it's at the end of Lake Mead Boulevard in the northeastern part of the city on the way to Lake Mead.
Posted by Garry Hayes at 11:39 PM

Thank you for such an interesting article - and photos/drawings. I've only been to Las Vegas once in the 1980s, dragged there by a newly-divorced girlfriend - and although I loved looking up to the mountains, I never knew at that time that I could go walking up there to find so much. I appreciate your writing this, Garry.