Out in America's Never Never: Barriers and the Thin Line of Civilization


In math, getting from Point A to Point B is hardly a problem. It's a straight line most of the time, or an arc, determined by some kind of equation. Getting from point A to point B can be a problem in a city, since buildings are often in the way, yet a good map or a vocal GPS unit gives you plenty of routes and choices to avoid traffic and delays.

Out in America's Never Never, the vast desert encompassing the Colorado Plateau and Basin and Range provinces, getting from Point A to Point B becomes a true challenge. Mountains may block the route, as the Forty-Niners found during the California Gold Rush (and earlier settlers like my ancestors, the Donners). There might be flat, open ground between one point and the other, but there might be no water. In a pre-automobile era, that was a serious problem. But out of all these examples the Colorado Plateau has one really impressive barrier: the Colorado River.

What's the problem? It's a fair sized river as such things go, the biggest of the American Southwest, but it is hardly a trickle compared to many rivers back east and in the Pacific Northwest. Those rivers were barriers to travel, but numerous ferries and bridges soon solved access problems a long time ago (and numerous boats used the rivers themselves as a highway). The Colorado, though, is a geologically young river. It is rapidly cutting downward through the sedimentary and metamorphic rocks of the recently uplifted continental crust, and the consequence of this is an unnavigable rapid-filled river ensconced in a deep vertical gorge along its entire pathway through the plateau country. Until the Navajo Bridge (above, left) was constructed in 1928 the only place to cross the river between Moab, Utah and Needles, CA, a river distance of 600 miles, was at Lee's Ferry, about five miles upstream of Navajo Bridge (the completion of which put Lee's Ferry out of business). The ferry was the only spot on the river whose approach was not overly complicated by vertical cliffs.

There are more bridges today, but there is still a 300-plus mile stretch between Navajo Bridge and Lake Mead at Hoover Dam where there are no crossings (except the footbridge in Grand Canyon near Phantom Ranch). Travel through the Colorado Plateau country is still complicated by this fact (and frankly, it should remain so). 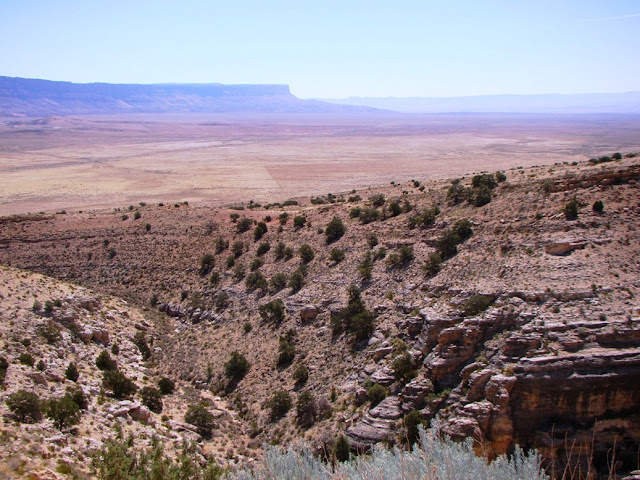 The paved highways give us a somewhat false sense of easy access, as they must also surmount or circumvent barriers in the landscape formed by river canyons and vertical cliffs. As long as there is gas in the tank, a working air conditioner, and properly tuned engine, we give little thought to how tenuous our control is over our localized environment. A flat tire on a deserted road on a blazing hot day can be life-threatening. And small geological events can have far-ranging consequences. 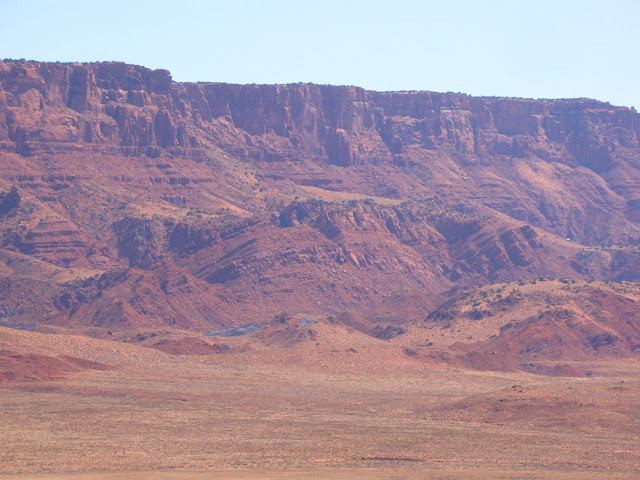 The original plan for our trip (conceived a year earlier) was to leave the North Rim of Grand Canyon and scoot down the slopes of the East Kaibab Monocline into the Navajo Section of the plateau country. We would cross the Colorado River at Navajo Bridge, turn at Bitter Water onto Highway 89 to Page, Arizona, where we would have a slow-paced tour of Horseshoe Bend, Glen Canyon Dam, and the incredible Antelope Canyon. From there it would be a fairly quick drive to Navajo National Monument, where we would be camping for the night. It was meant to be the most leisurely day of the trip.

The picture above gives a hint about how geology made our day a constant exhausting race against time. The Vermilion Cliffs are a prominent part of the Grand Staircase, revealing early Mesozoic formations, including the Chinle, Wingate and Kayenta. The Chinle, at the base, is composed of easily eroded shale and siltstone, and is subject to slope failure. In the picture above, looking across House Rock Valley, the lower slopes look tilted because they are part of a huge rotational slide. 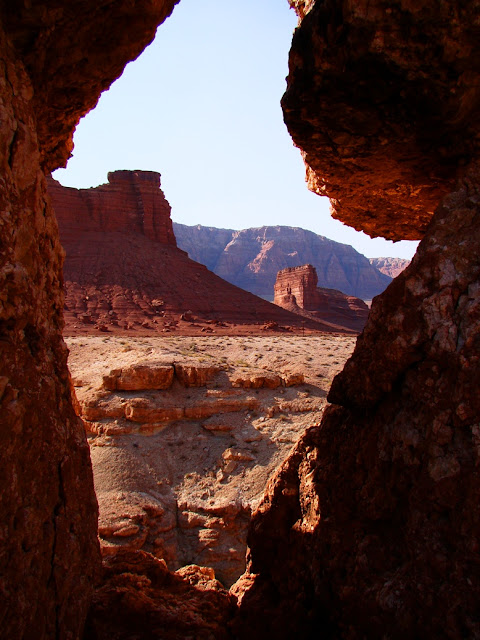 If you take a big group through this region, you will need to make the camping reservations five or six months in advance, and even at that I nearly missed getting reservations for Arches National Park and the North Rim of Grand Canyon. As such, once the schedule has been established, it can't be easily changed.

But geology can change. Highway 89 from Bitter Water to Page starts out in spectacular fashion, climbing a slope of Chinle to a big cut through the Echo Cliffs, composed of the Wingate, Kayenta and Navajo formations. The view from the upper highway is a stunning panorama of Marble Canyon, the Vermilion Cliffs, and the East Kaibab Monocline that forms the margin of the Kaibab Plateau and Grand Canyon.
The problem for the road engineers was getting across the Chinle slopes. The Chinle doesn't like highways on the flatlands (swelling and settling of the clays turns the best planned highways into roller-coasters), but it especially doesn't like roads on slopes.

Ultimately they chose to put the road across an ancient landslide not unlike the one in the Vermilion Cliffs above. It is especially visible in Google earth images, where a white outcrop of Navajo Sandstone can be seen well out of place next to the highway (below).

In February, a portion of the old slide gave way, destroying a significant stretch of the highway. This wasn't the kind of slide that could be fixed easily, and the road will be out of service for a long time. The Echo Cliffs constitute a significant barrier to east-west travel, and between Bitter Water and Tuba City, only one dirt road crosses it. The state is in the process of paving the track, but it was nowhere near done when we passed through.

If we were going to see the Navajo Bridge and the Colorado River, we would need to make a 140 mile detour to get to Page and our other objectives. And then backtrack around 70 miles.We barely made it to our tour appointment at Antelope Canyon at 3 PM. We got to see Horseshoe Bend, but the visit to Glen Canyon was cut very very short, and we didn't reach camp until well after dark.
It was a long day...but spectacular, just the same. More later!

For more information about progress with Highway 89, check out http://www.azdot.gov/us89/

Haven't been on the road with the landslide, but that looks like a spectacular notch that it goes thru at the top.