Out in America's Never Never: The Mojave, a Vast Unknown Treasure


The first morning on the road into America's Never Never found us at Hole in the Wall in the middle of the Mojave National Preserve. The Mojave is a vast region in eastern California that is both well-known, and completely unknown to the residents and visitors to the state. It's "known" because millions of people travel Interstates 15 and 40 every year through the region on their way to Las Vegas or Phoenix. It's "unknown" because the vast majority of travelers never set foot outside their cars except for the bathrooms in Baker or Needles. The landscape between the two interstates is a vast terra incognita to them. It's no wasteland...it is an exceedingly fascinating region, geologically and biologically.

We passed through the heart of the park, traveling from the Essex turnoff on Interstate 40 for 20 miles to the Hole in the Wall campground, and then through the Mid Hills and Mojave Road to Kelso-Cima Road and the Morning Star Mine Road to Interstate 15. Although our time was short, we saw some vast vistas of the third largest unit in the national park system outside of Alaska (I think only Yellowstone National Park and Death Valley National Park are larger; Grand Staircase-Escalante National Monument is also larger, but is administered by the Bureau of Land Management). 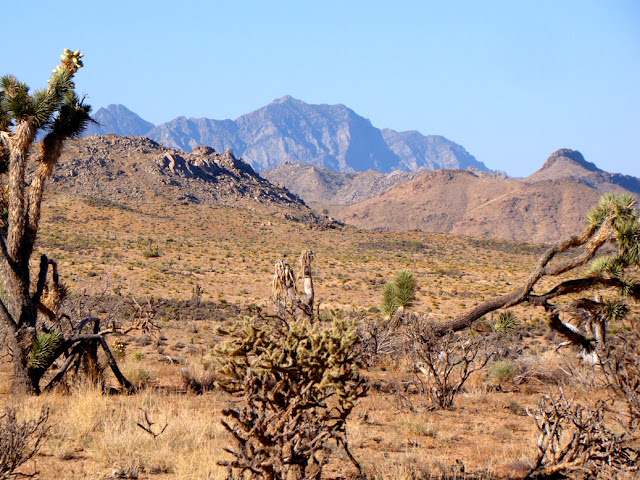 The park has a series of unique ranges, including the Providence, Granite, Clark, and New York Mountains, reacing elevations of just short of 8,000 feet. The great range of elevation allows a huge variety of plants to thrive. Of greatest interest (to me anyway) are the Joshua Trees and the White Firs.

Wait, Christmas trees in the desert? Yes! There are relict forests that cling to life at the tops of the highest peaks of the New York and Clark Mountains. During the ice ages when the climate was wetter, they thrived over a much larger area, but with the ending of the glacial advances and the drying, they retreated to the small groves that exist today. It's a part of the park I have not yet had the privilege to visit, and I can't find pictures on the Internet, so that may be part of a future trip.

The Joshua Trees, on the other hand, are right there. The largest grove in existence, more than a million individual trees, can be seen on Cima Dome. We stopped to have a look. The Joshua Trees are members of the lily family and are widespread throughout the Mojave Desert. Joshua Tree National Park preserves many of the trees, but Mojave National Preserve may actually have more of them. Some of the trees on Cima Dome have trunks 3 feet across, and may be centuries old.

Cima Dome is one of the more unusual geological structures found in the Mojave Desert. The smooth gravel covered convex surface was thought at one time to be the end result of desert erosion of a faulted mountain block and pediment, but the origin may be more complicated. The Cima Volcanic Field on the west side of the dome may be related. Lava flows range in age from 7 million years to as recently as 10,000 years ago. The top picture of today's post was taken in a lava tube that is part of one of the recent flows.

From our perch high on Cedar Canyon Road, we could look south and see the Kelso Dune Field, one of the highest and largest sand dune systems in the country. The highest dune rises 650 above the surrounding desert. Numerous endemic species of plants grow in the dune environment, but the dunes are best known for "singing". Under the right conditions, the dunes "boom", but the reasons aren't clear.
I have saved my outrage for the last aspect of the park region. Providence Mountains State Recreational Area is an island of state land within the National Preserve. It "preserves" a group of caves, including the Mitchell Caverns and the Cave of the Winding Stair. Originally in private ownership, the state promised to care for the caves and for years conducted tours and kept up the small but charming campground.
But the recession destroyed the state budget, and the SRA was slated to be shut down. Even when money was found to keep the other parks open, Mitchell Caverns were shut down because the two rangers working there elected to retire. The park was gated and abandoned. The administrators of the park system must have assumed that distance and isolation would protect the facility. Administrators think that way. They were, of course, very wrong.
Vandals broke into the park visitor center, destroying exhibits, stealing equipment, and removing thousands of feet of copper wire that was used to light the cave. If the park is ever to be reopened, it will cost a great deal more to fix what has been damaged than it would have been to keep a caretaker on site.
There are hints that the state might be thinking about fixing things now that the state budget is in better shape. I hope they consider bringing back one of the gems of the state park system.

We made our way north out of the Preserve and made our way to the bathrooms and mini-marts over the border in Nevada.
Posted by Garry Hayes at 7:47 PM

Mojave NP offers such dynamic and diverse landscapes. Sorry to hear about the caverns closing.

People will always be the most destructive force in our known universe.......shoot on site is the only deterrent any of them will understand....if you are in wilderness and you see someone vandalizing anything.....shoot on site.....let the wildlife take care of the rest...