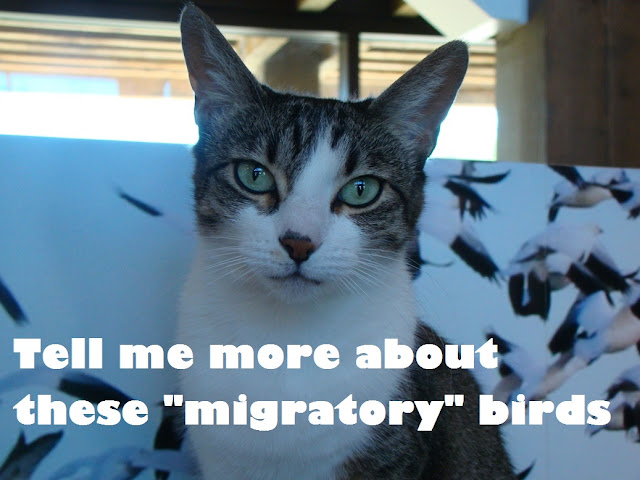 The other day I posted about our discovery of a nearby treasure, a bit of the California Prairie being returned to a "pre-European" condition with the purpose of preserving a viable part of the migratory flyway for birds in the midst of their journeys between the Arctic and the Equator. It's the San Luis National Wildlife Refuge Complex, a fascinating combination of riparian habitats, marshlands, wetlands and grasslands that is both a permanent home for many birds and other animals, and a stopping place for millions of others.

The other day we just followed a short auto trail, but some research told us that the refuge had much more to offer. The park recently added an excellent visitor center, and offers a number of other auto tours and hiking trails. It's not the prime part of the year to see the migratory birds, but there were plenty of other interesting things to do. 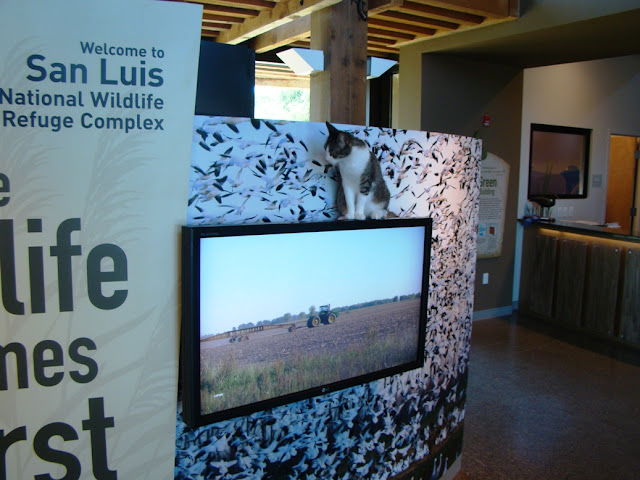 The visitor center was quite interesting with lots of interactive displays, including Lucky the resident cat. She was a feral member of the refuge who was hanging out around the visitor center while it was being constructed. When it was finished, the staff seems to have adopted her, and she has a free run of the exhibits. As the staff points out, that as an indoor kitty she has a huge playground, can't eat the native birds, and won't get eaten by one of the resident carnivores.She is quite friendly... 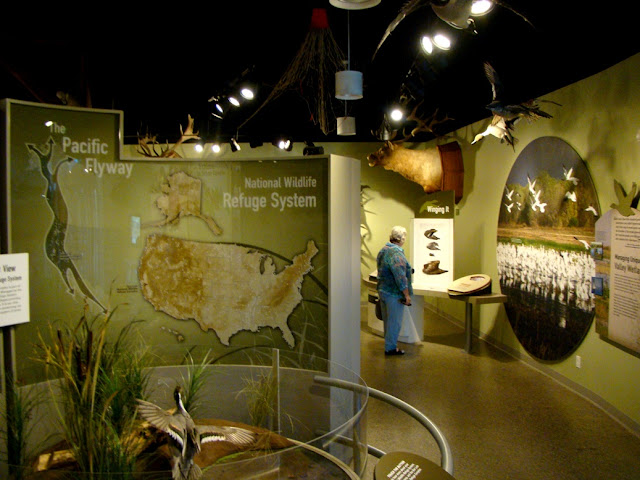 The building has other interesting aspects. It is a LEED (Leadership in Energy and Environmental Design) Platinum building, with a carbon neutral footprint. Solar panels provide 100% of the energy used in the building, and it uses less than half the water of similar sized complexes. 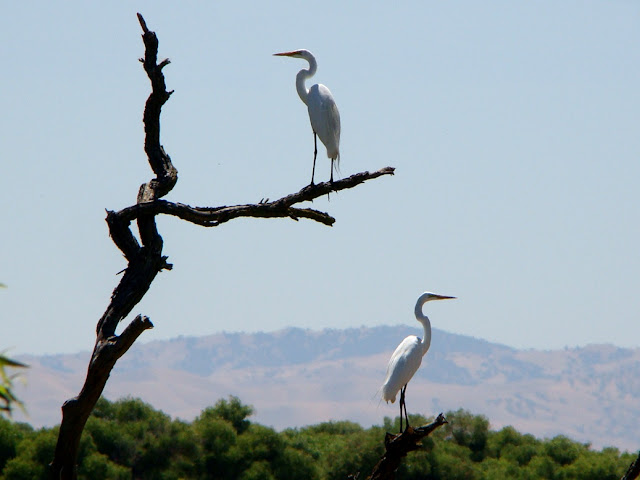 After our visit with Lucky (oh, and the exhibits), we set out on the waterfowl auto tour. Being the height of summer we didn't expect to see many animals. We were the only visitors on the road (and there should be more). As it turned out, we saw a fair number of interesting birds, almost all of them egrets. 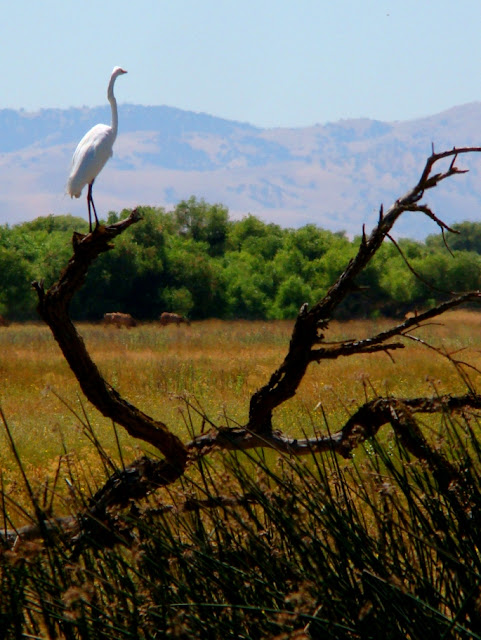 I took the picture above without noticing the herd of elk in the distance! The thing about the egrets is that they were wary of our presence and tended to take off quickly, so we tended to point quickly and shoot before they flew off. Like below... 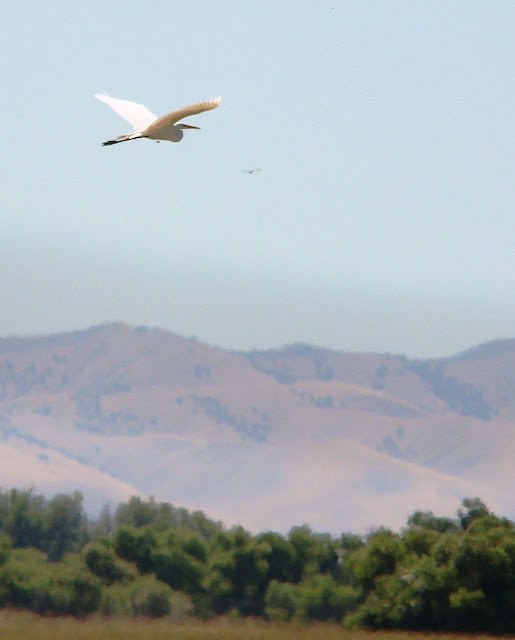 Zoom lenses were handy, which explains the fuzzy look to some of the pictures. That also happened because we dispensed with tripods. There was never enough time to set up before they took off. 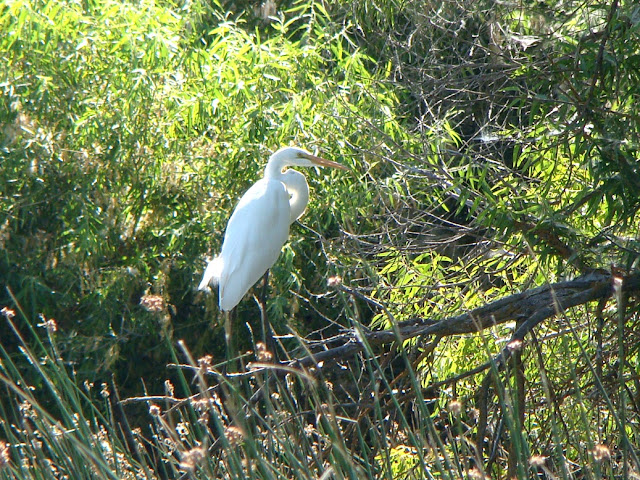 Oh, there's another one flying away! 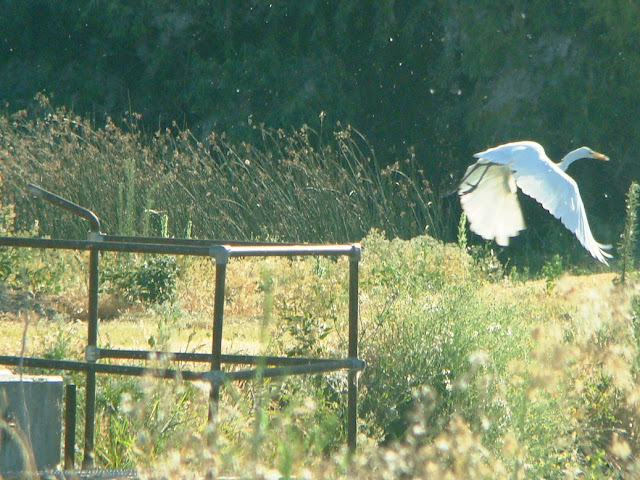 Does a geological connection seem to be missing? I actually do write about other things sometimes, but I'm coming to realize that a place like the San Luis National Wildlife Refuge complex is very geological in nature. It's not just a layer of sediment. The four environments in the complex (riparian, marsh, vernal pools, and grassland) are all related to activity along the ancestral floodplain system of the San Joaquin River, which has recently started to flow through the refuge again due to legal agreements designed to maximize conditions for the migratory birds and to restore the salmon fishery. There was once a complex intermixing of these environments that was destroyed by the diversion of water for irrigation, and plowing for agricultural development. Groundwater conditions changed radically. It is taking a concerted effort at understanding the dynamics of streamflow and groundwater distribution that is making it possible to restore this complex prairie and riparian environment. It's a multi-decade project, with clear progress in many areas. I was impressed with what I saw! 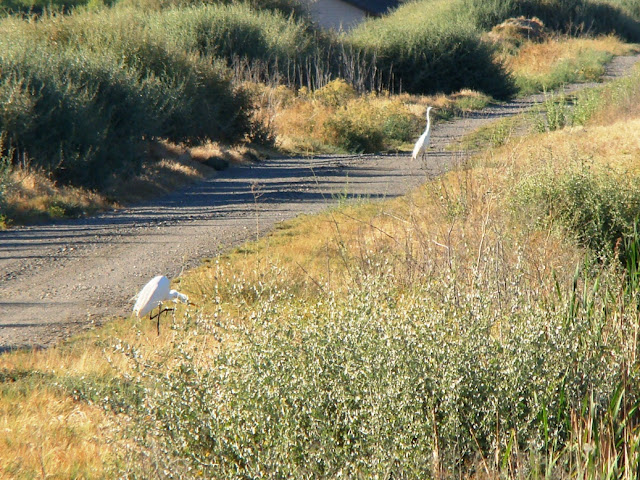 To my local friends who teach: this refuge is just a few miles from Modesto, Turlock, Los Banos, and Merced, and is a perfect destination for class field trips. Kids will be fascinated with the place, both indoors and out.

Next, the big mammals that live on the complex...
Posted by Garry Hayes at 12:30 AM