Out in America's Never Never: Desert Water...Gambling with 30 Million People


Water. Nothing in the world makes you appreciate it more than not having it.

In the desert, water is the factor that decides life. An organism adapts to the lack of it, or that organism disappears. The plants of America's Never Never either store it, have deep taproots, or they wither and die until the next flash flood. The animals either live near the few precious springs, or get their water from the plants that they eat.

The region between the Sierra Nevada and the western edge of the Colorado Plateau includes some of the driest landscapes in the world. Nearby Death Valley averages 1 or 2 inches of rain per year, and in some years receives none. The most it has ever received was 4.5 inches or so. 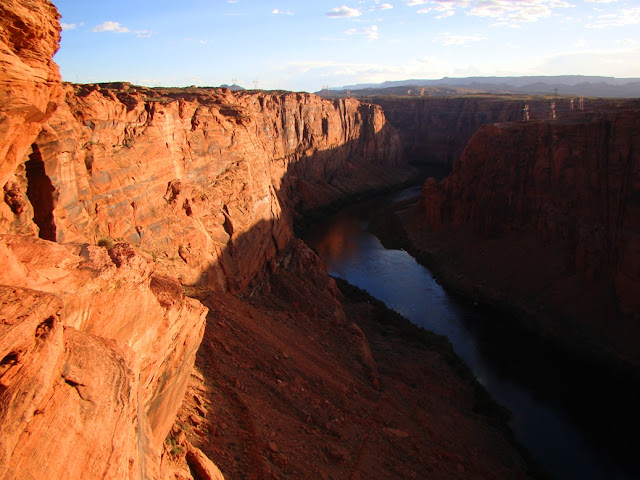 One single thread of water winds its way through this parched land. From the Wind River Range in Wyoming and the Colorado Rocky Mountains, the Colorado River gathers the snow melt from countless high mountain ridges and flows for 1,450 miles through one of the driest environments on the planet. In the five million years that it has existed in its present course, the river has excavated untold cubic miles of rock, filled in the huge delta at the head of the Gulf of California, and filled numerous hidden groundwater aquifers. Only in the last 100 or so years has the river been altered from this condition, due to the intervention of a unique new species on the planet. We have changed everything about the river and the balance of water use in the region. But for how long? 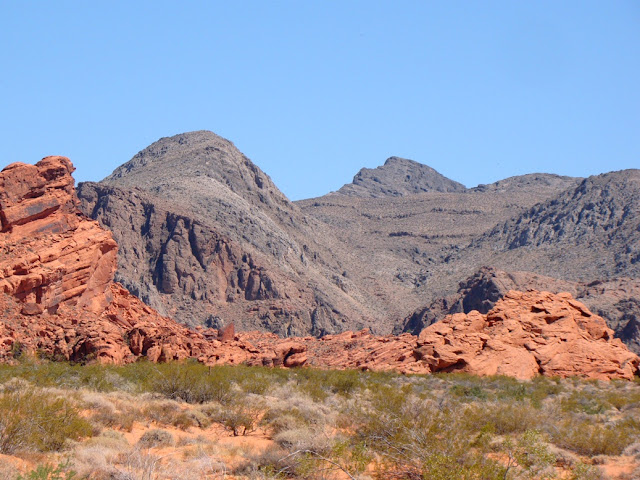 We spent a day traversing this dry landscape between the Mojave Desert and the edge of the Colorado Plateau near St. George, where we got a sense of just how dry this land is, and also how we have altered the balance of water use in the region. Our stops included the aptly named Valley of Fire State Park, and Lake Mead National Recreation Area. 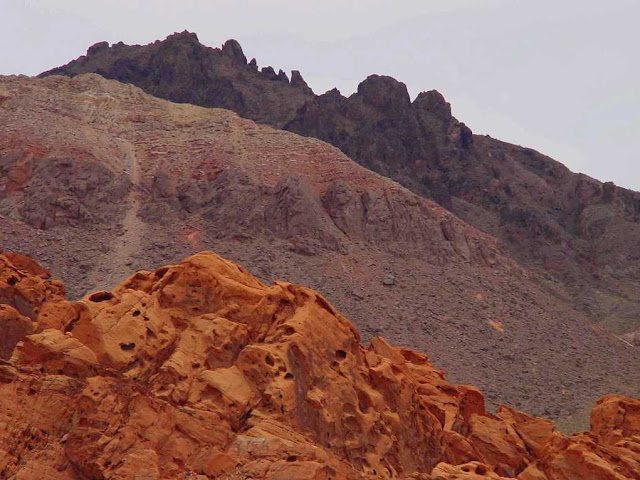 The red sandstones of Valley of Fire are called the Aztec Sandstone, a Jurassic layer that is related to the Navajo Sandstone that makes up much of the scenery on the Colorado Plateau. Here in Valley of Fire, the rock has been jointed and fractured, and spheroidal weathering has turned the rocks into a wonderland of jumbled rounded boulders. The rocks were caught up in a compressional event in Cretaceous time called the Sevier Orogeny. Older Paleozoic rocks were pushed up and over the Aztec along a series of thrust faults. When the Colorado River established its present course, headward erosion along the tributary streams (in this case, the Virgin River) exposed the deeply buried rocks. 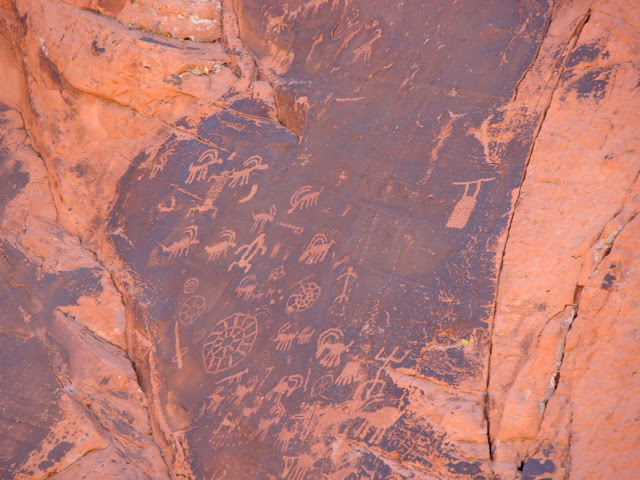 Water was available along the Virgin River, so Ancestral Puebloans and other cultures have lived here for thousands of years. They left a visible record of their existence in the form of petroglyphs in the desert varnish that covers many of the rocks. Their villages were small, in keeping with the limitations imposed on them by the lack of water.

Contrast the existence of these small villages with the huge metropolis of Las Vegas. Or Phoenix. Or Los Angeles. For in the same way that the Virgin River made a small villages possible, the Colorado River allowed huge cities to exist in the desert. Phoenix survived for years with groundwater, but the water accumulated in the ice ages, and can never be replaced. A water table that began at a depth of 30 feet now lies hundreds of feet lower. The Central Arizona Project allows Phoenix to put a big straw in the Colorado River and draw out large amounts of water. Los Angeles got along with water they accessed (stole) from the eastern Sierra Nevada and Owens Valley, but they grew too much and needed more. Canals draw water into the Imperial Valley and further towards reservoirs that ring the L.A. Basin. Las Vegas is the most dependent; groundwater provides only 15% of their water. The rest comes from the river's big storage facility, Lake Mead. To their credit, they put some of it back. A permanent river with a constant flow of thousands of gallons per minute flows from their water treatment plants back into Lake Mead (remember, downstream users, you get what Las Vegas flushed away!). None of the river's water flows into the Gulf anymore.

We stopped briefly at Callville Bay (in part to "add" some water back to Lake Mead), and were shocked to see the problem that faces these cities, and all the other stakeholders in Colorado River water. All the white, bleached area in the photo above is supposed to be under water. It hasn't been underwater in a long time, due to a horrific drought that has gripped the region for the last decade (and the drought continues). Lake Mead has dropped to historic lows, less that 50% of capacity.

Lake Mead is the largest reservoir in the United States, holding around 28 million acre feet of water, equal to two years of "normal" flow for the Colorado River. The reservoir is perilously close to "dead pool" level where it won't be able to generate hydroelectric power. What happens when the water runs out?
At Valley of Fire, we were amused by the antics of the small Antelope Ground Squirrels. When they got too hot, they buried themselves in the sand to cool off. 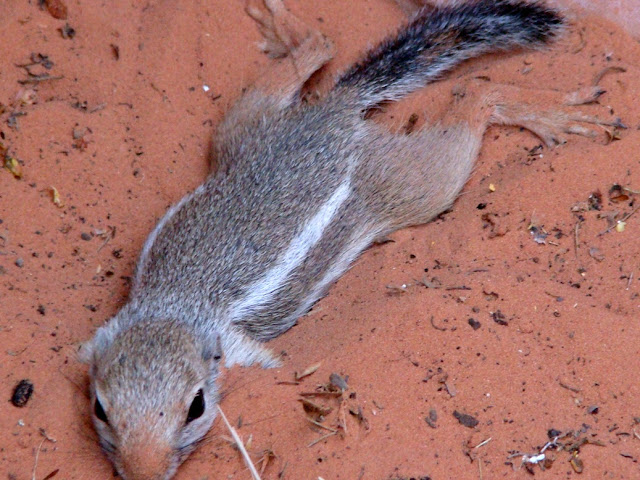 Unfortunately, we don't have the choice of burying our heads in the sand. We take for granted that we turn a knob and water comes out. It may not always be that way. The inhabitants of the American Southwest have some hard decisions coming as global warming continues to change our environment.

Oh, the dog in the opening photo? It's cooling off in Rogers Spring, one of the natural springs that flows out of a fault zone on the north side of Lake Mead near Valley of Fire. There is a bit of water to be found even in the driest places.
Posted by Garry Hayes at 12:15 AM