Out in America's Never Never: Erg-onomics of a Desert Park 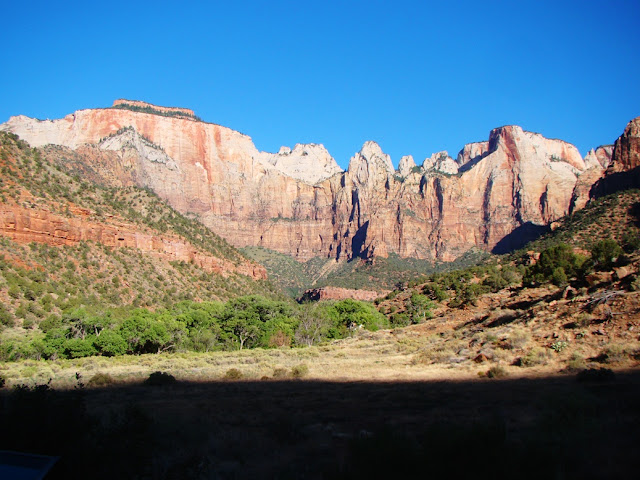 That's right, geologists can't help themselves. They like puns. This isn't a discussion of how to sit properly in a national park, or to hike without causing carpal tunnel syndrome in your toes. It's about sand, lots and lots of sand. Enough sand to cover as much as 625,000 square kilometers (about 240,000 square miles). My home state of California totals a little over 420,000 square kilometers, to give a bit of a comparison. Large "seas" of sand dunes are called ergs.

On our second day out in America's Never Never, we had reached Zion National Park in southern Utah. The park is justly famous for the sheer cliffs that tower over the valley floor, and for the beautiful scenery along the Virgin River. The scenery exists primarily because of one formation: the Jurassic aged Navajo Sandstone. The bold cliffs which sometimes have sheer drops of 2,000 feet (600 meters) are composed of cemented dune sands of an erg that once extended from southeastern California to Wyoming and Idaho. There are few if any places like it in the world today. 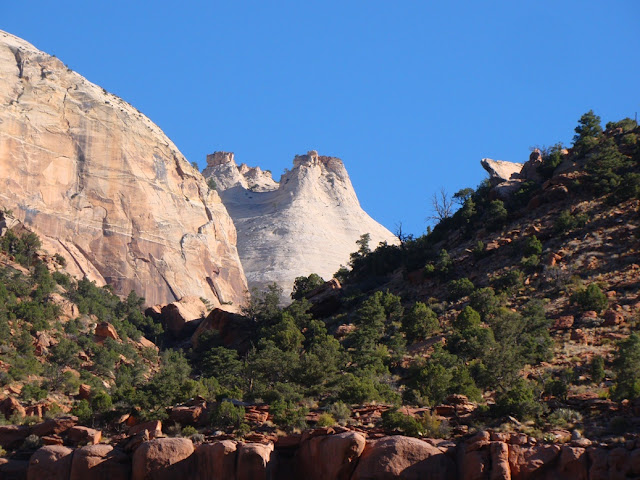 This vast amount of sand had to come from somewhere. Recent studies have demonstrated that it was probably eroded from the Appalachian Mountains and transported by rivers to the Midwest. The evidence is mineralogical, but it also makes sense because the eastern mountains were the only range in Jurassic time with enough elevation and extent to account for the approximately 60,000 to 140,000 cubic kilometers of sand (14,000-34,000 cubic miles). Some material may have come from the rising Sierra Nevada magmatic arc, but that range was small in comparison. 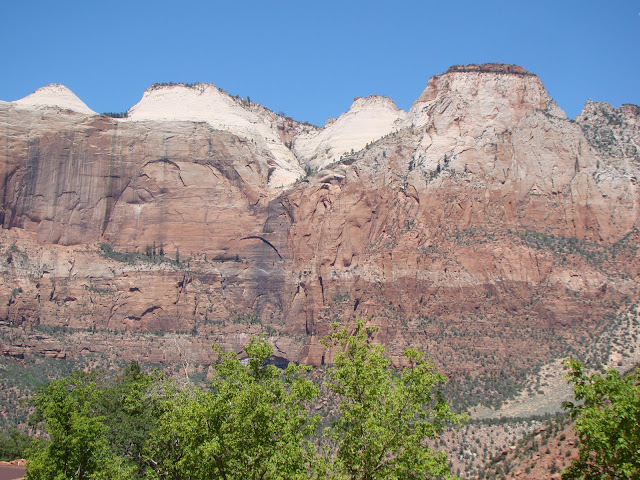 The Navajo Sandstone ranges in color from pure white to dark reddish-brown. Iron oxide minerals provide the color. Their presence may be related to petroleum that may have once existed in the unit (if it did, it would have been a resource to dwarf Saudi Arabia).

Zion National Park is just one of the spectacular exposures of the Navajo Sandstone to be found in the Colorado Plateau region (our stop in Valley of Fire also was in the same unit). It is in Zion that the greatest thickness of the unit is achieved, and the scenery is truly grand. A visit to the park should always include an exploration of the Narrows of the Virgin River, and if one is in good shape, a visit to Angels Landing or Observation Point is a great idea. If one is straining one's neck by looking up at the cliffs, a drive to Lava Point is in order. From the end of the gravel road, one can look down into the canyons from above.
If you are having trouble imagining the sand dunes themselves, hop on over to nearby Coral Pink Sand Dunes State Park to the east of Zion National Park. We did, and had a great time looking at (and playing in) recycled Navajo Sandstone. The park has examples of several types of dunes, and has areas of active dune formation and migration as well as dunes that have been anchored by vegetation.
Coral Pink Sand Dunes are far too limited in extent to be considered an erg (in the United States, only the Algodones Dunes of Southern California are considered to be of sufficient extent at 800 square kilometers). It is fascinating to think that the sand of which the dunes are composed once was carried in a Mississippian-sized river from a vast mountain range in the eastern United States, formed dunes in one of the largest sand seas ever to exist on the planet, was locked in solid rock for 200 million years, and only a few thousand years ago was released to bounce in the wind once again.