Out in America's Never Never: Is it the Journey or the Destination? Plus an unkindness and a bunch of bull... 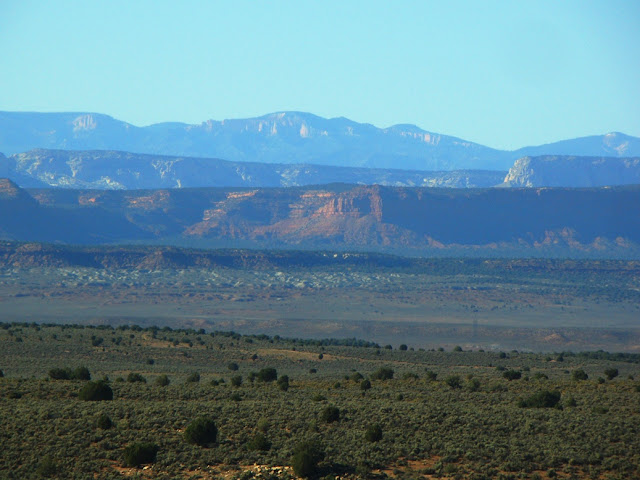 Our exploration of America's Never Never included a lot of destinations: Zion, Bryce, Arches, Black Canyon, Mesa Verde and many others. But what is the value of seeing specific points in a landscape without seeing the lands between? Sometimes I have to convince my students that sleeping while traveling between incredible places causes us to miss the context of each of our stops (don't look for hypocrisy on my part; it's too easy. I sleep a lot on the road). If we only see specific sites, and miss the transitional landscapes that lie between them, we miss out. This is especially true while traveling between Zion National Park and Grand Canyon National Park. The two parks could hardly be more different: the rocks of the Grand Canyon are Proterozoic and Paleozoic in age. The walls of Zion Canyon are composed of Mesozoic rocks, primarily the Navajo Sandstone.

What happens in between? How do we transition between 100 million years of geologic history? As we drove beyond Kanab and Fredonia onto the sage-covered plains, we could look north and see the Grand Staircase. It is a series of cliffs that contain all of the sediments that once covered the Grand Canyon region, but which have been eroded away in a northward direction. Clarence Dutton coined the term in the 1870s and identified each cliff by color: Chocolate, Vermilion, White, Gray and Pink.

The Grand Staircase is preserved today as the western part of Grand Staircase-Escalante National Monument. It is a larger park than Grand Canyon, and contains a diverse landscape of deep slot canyons, high plateaus, faults and monoclines. The origin of the park was clouded by controversy (President Clinton established the park over the objections of local politicians), but new national monuments often are controversial. 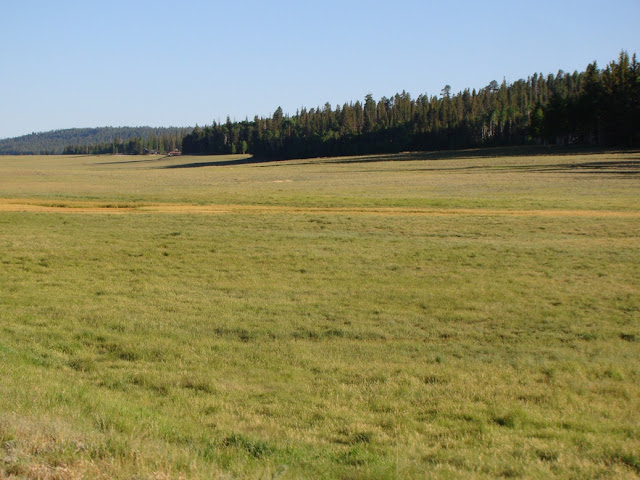 We soon left the arid plains and climbed to higher elevations on the Kaibab Plateau, the vast uplift through which the Grand Canyon has been carved. The scrub and pinyon forest fell away and a thick forest of ponderosa and fir dominated the scenery. Soon we were passing through green meadows, a sharp contrast to the dry lands below.

It is odd that literally no streams or rivers cross the surface of the plateau. It turns out that the Kaibab Plateau is covered by the Permian-aged Kaibab Formation, a layer composed mostly of limestone. Limestone is soluble in slightly acidic water and joints and fissures will grow into caverns. The ceilings of some caverns will collapse, forming sinkholes. Any surface water tends to disappear into the subsurface quickly. Such surfaces are said to exhibit karst topography.

Some of the sinkholes will fill with clay or mud, forming an impermeable layer. It is these sinkholes that will develop into the lakes and ponds occasionally found on the North Rim. They are pretty much the only source of open water and thus are important to the animals that live here. 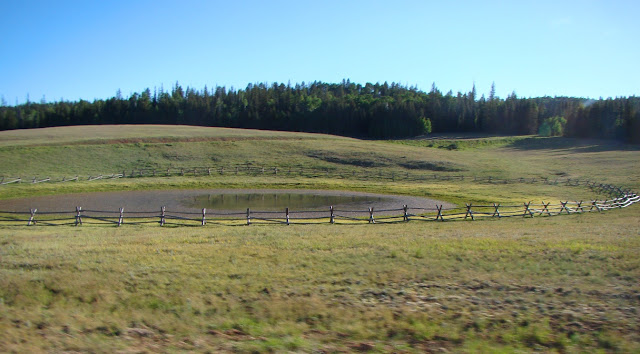 We usually arrive at the North Rim of the Grand Canyon in the late afternoon when the shadows are crossing the meadows and grazing animals start emerging. I've learned to see black spots in the distance and identify the creatures before anyone else. Often there are deer, and often a flock of ravens, which I learned tonight is called an "unkindness". I guess that's better than what they call a flock of crows... 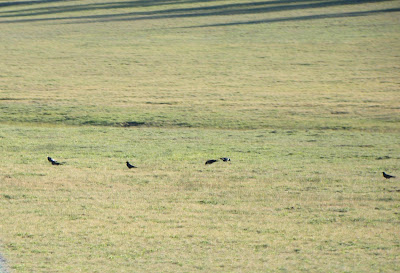 On this trip I saw specks in the distance that looked different than anything I had ever seen before in twenty-five years of travels to the North Rim: too fat to be deer, and too large to even be cattle, which aren't supposed to be here anyway. It was a herd of buffalo! 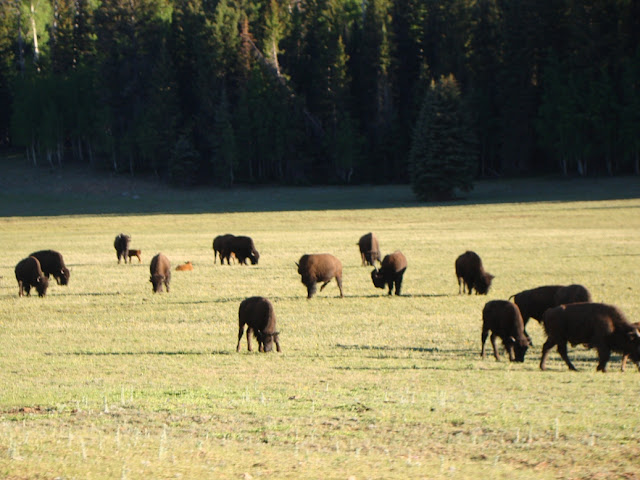 Or "more or less" buffalo. It turned out this was a herd that originated in the adjacent House Rock Valley. They were the result of an experiment in the 1920s to "beef up" the cattle herds by crossing them with bison. It didn't work out, but the "mostly bison" continued to live in the valley over the years. Since they aren't a genetically pure herd, the state of Arizona sells permits to hunt the animals, and for a long time the herd remained relatively small. 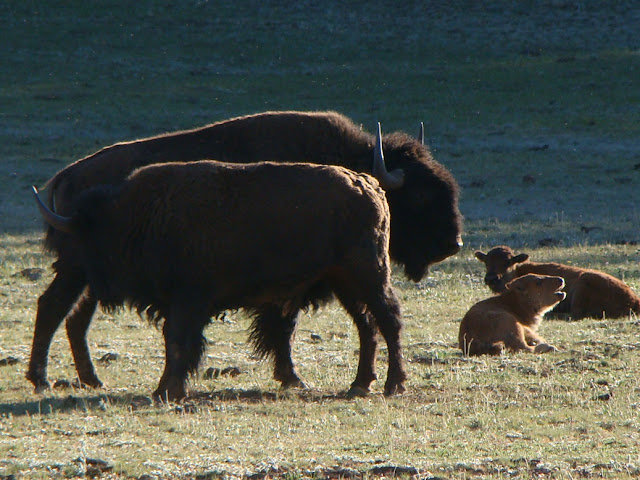 Enter global warming and the crippling drought that has affected the region for the last 10 years. The herd moved uphill to find greener pastures, and fences and park boundaries mean little to these large animals. They found their way onto the meadows of the Kaibab Plateau and took up residence in grasslands that have not felt the hooves of creatures this big in thousands, maybe tens of thousands of years.

It was exciting to see these creatures, a feeling reminiscent of being in Yellowstone National Park, but it was disturbing as well. The animals trample springs and meadows, and may be upsetting the checks and balances of the local ecosystem. The park service is quite unsure about what to do.
A few more miles, and we arrived at our destination: the North Rim of Grand Canyon National Park! And what a grand place it is. More later! 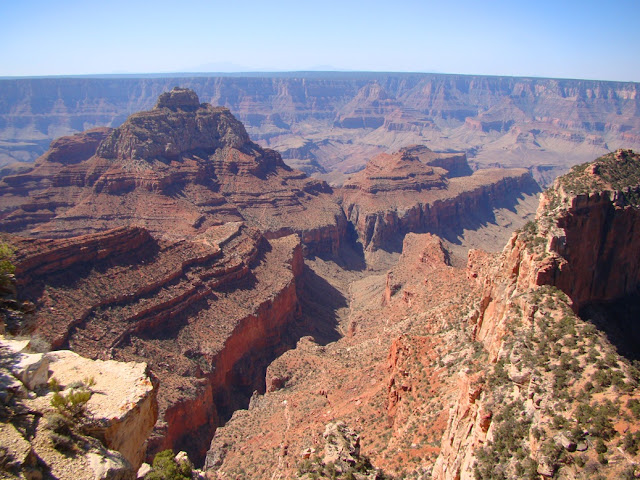