How it was: The Last Days of Fall in Yosemite 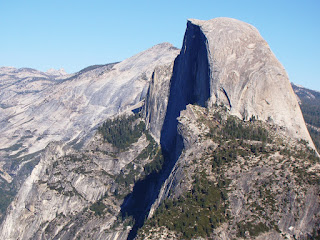 We were in Yosemite last weekend, catching the last vestiges of the fall season, and exploring a landscape that was at the end of a cycle. Life was ebbing, preparing for the arrival of winter, which apparently intends to arrive on Thursday (a series of snowstorms is expected). As such, we were probably some of the last people who got to visit Glacier Point this year. It was a beautiful day (I would be more poetic about it, but words start to fail when trying to describe a place like this). 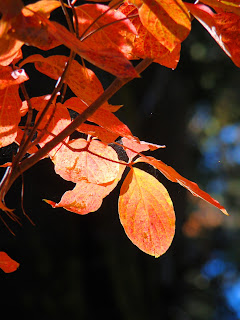 The peak of the fall colors was some time ago. We passed groves of trees that had lost all their leaves, but in some sections of the park, color was still intense. I understand that the eastern hardwood forests are the epitome of fall glory, but I also see wonder in catching the colors spread out in a dark conifer forest as the sun lights up the dogwood and oak understory. 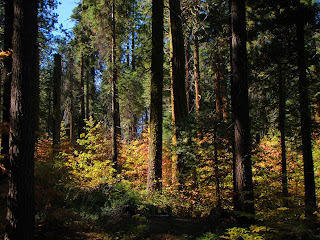 A spider was feverishly busy trying to catch a last meal for the season. 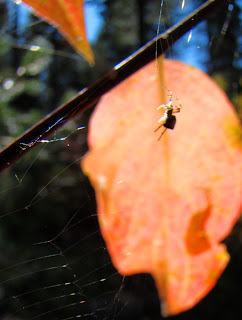 There were a few flowers still hanging on near the Merced River. This apparently is a Coneflower (my credentials as a biologist have always been suspect). The flowers were on their way out; the petals were gone on the other side of this one. 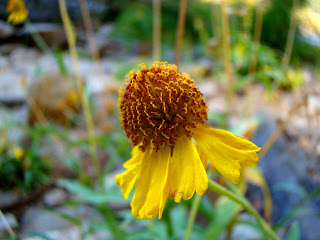 The Merced River was running slow and clear. Last spring I would have been standing in two or three feet of water at this spot. 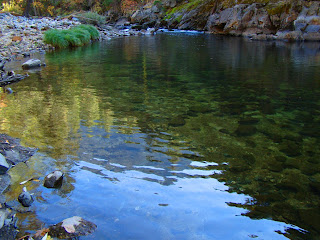 We headed up the road to Glacier Point. The air was still and clear, and there were no clouds. The peaks stood out clear as crystal, and I couldn't help taking pictures of mountains and domes I've photographed many times before. It always seems like I am looking for unusual lighting and clouds to spice up pictures of these features, but today I was concentrating on preserving the peaks in plain afternoon sunlight. The pictures make me think of a baseline, a version from which all other pictures can be compared ("what do those mountains look like when they aren't shrouded in mysterious clouds?"). The exfoliation dome of Mt. Starr King appears below. 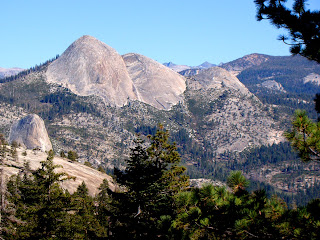 The Sierra Crest could be glimpsed in the distance, with Mt. Lyell, the highest peak in the park at 13,114 feet (3,997 meters) barely visible. Peaks of the Clark Range a little west of the crest tend to dominate the skyline. A few small patches of snow made it through the summer. 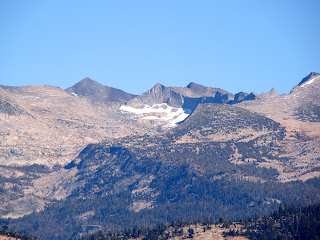 Half Dome sits across the valley from Washburn and Glacier Points. A zoom on the summit revealed no hikers; I'm guessing the cables are down by now, so no one was around. 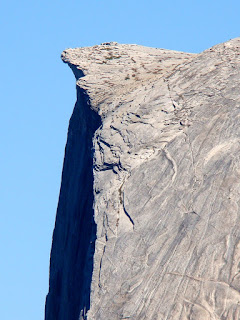 Mt. Clark is a pretty nice example of a glacial horn, a peak that has been steepened on all sides by the plucking action of the glaciers that were here only 12,000-13,000 years ago. 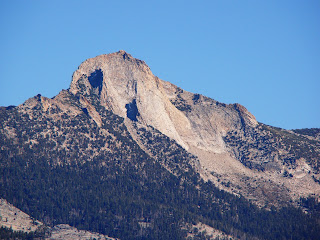 I was reminded while looking at Tenaya Canyon below Half Dome how much geology changes the park. If you remember this view from any time before 2009, it is forever changed now. The Ahwiyah Point rockfall produced the long white scar down the slope in the center-left side of the photo. It was the biggest rockslide in more than two decades. 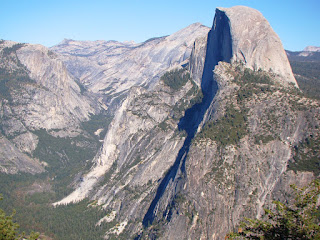 Glacier Point offers one of the greatest views to be seen anywhere. The cliffs drop 3,000 feet below one's feet, and there is a unique perspective of the famous waterfalls, since they are being observed from above. Yosemite Falls had the smallest of trickles falling down the face (the bright sunlit cliff). In a few days ice will replace water on the cliff face. 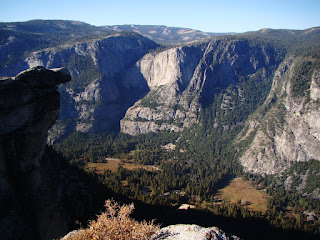 On the way down Glacier Point road, we stopped for a look at Summit Meadow. The willows had turned red, contrasting with the yellow meadow grasses and the evergreen lodgepoles. To get the reflections on water, I had to get out into the middle of the meadow, which is not really a nice thing to do, since the trampled grass and mud is unsightly, and it damages the soils. So I found a way to get there without stepping on grass... 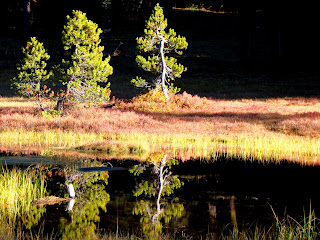 And there it is, a fallen tree. It was a real balancing act to not fall off. 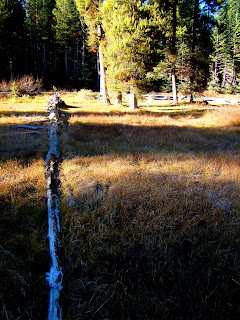 And that's the way it was. I saw reports that it was very windy in the valley today, and that snow level will be down to 3,500 feet or so by the end of the week. Yosemite will be a very different place by the weekend.
Posted by Garry Hayes at 1:17 AM

I'm so glad you get to Yosemite for all he seasons to share with us. What, no skiing there in the winter?

I am fortunate enough to live in
Yosemite. This is my first year here, so everything is new and exciting to me (I'm from New York). The last few days there has been ice on the cliffs under Yosemite Falls! I love your blog! It has been very helpful to me in getting to know the park.