Vagabonding Across the 39th Parallel: Sun (and Moon) and Rock Revisited in Arches National Park 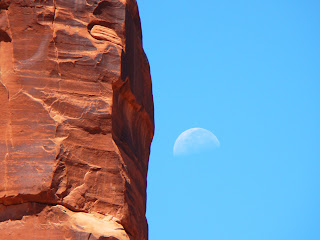 Arches National Park is an incredible place. As we continued with our vagabonding journey across the 39th parallel, we couldn't help but return to the sandstone wonderland the next morning after enjoying a beautiful sunset the night before. We had some miles to traverse, but we weren't quite ready to leave just yet. 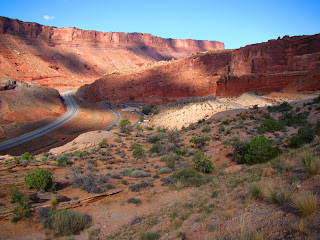 Arches has one of the most dramatic park entrances I can think of anywhere. From the main highway and visitor center, the park road climbs steeply up a round amphitheater eroded from the footwall of a normal fault developed on one of the salt anticlines that traverse the region. In the picture above, the rocks on the right that are sloping downward to the left are Jurassic in age. The rocks of the cliff on the left are Triassic rocks, millions of years older. The fault has caused the Jurassic rocks to sink downwards against the older sequence. 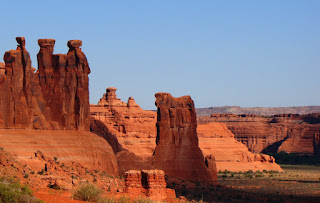 Our first order of business was to revisit our sunset spot of the previous evening. I wanted pictures of the same scenes in the morning light. The "nativity scene" profile morphed into spires and towers spread across a long valley. 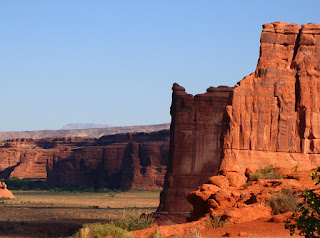 Comparing the pictures is almost like looking at negative images; instead of black rock against a blazing yellow-orange sky, there was blazing orange and red rock against a dark blue sky. 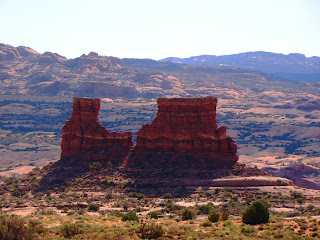 We continued up the road to the end at Devil's Garden. Along the way we got some nice perspectives of the sandstone fins. 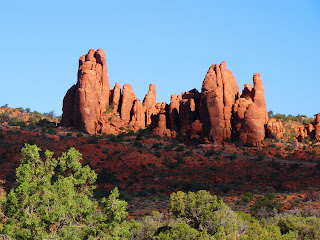 The fins formed as the solid sandstone stretched and sank into the salt anticlines, breaking in parallel joints during the process. The fins are the starting point for the formation of arches. 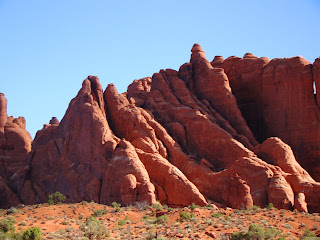 The sand between the fins holds groundwater long enough to dissolve the chemicals holding the rock together. Small arches form at the base of the fins, and grow larger as sand and occasionally larger chunks fall from the interior face of the growing arch. A small arch can be seen at the base of the fin in the picture below. For some reason whenever I see this outcrop I am reminded of the Jawa sandcrawlers from the first Star Wars movie.... 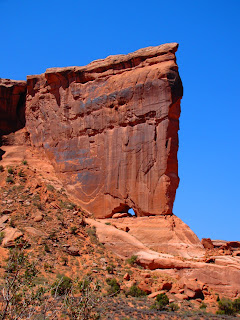 One of the most accessible arches is Skyline Arch, which forms a nice backdrop for the campfire theater at the campground in Devil's Garden. It takes a bit of scrambling to reach it, but it is well worth the effort. 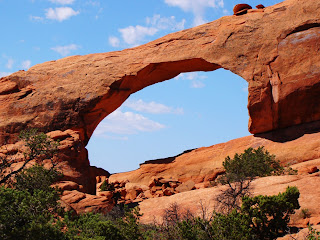 The arch opening was once much smaller. A big chunk fell in 1940 or so, increasing the size of the arch by 40%. A little huffing and puffing and I was standing in the opening. 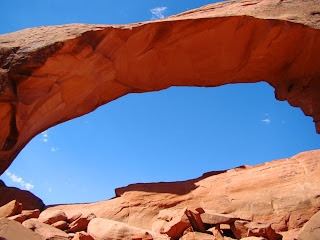 It is much steeper on the other side! There is a sheer drop-off, and a maze of fins off to the southwest. The scale is hard to perceive; click on the picture below and see if you can find the person standing on the rocks below the arch.

Skyline Arch has a special place in my memories. When I conducted my very first southwest geology trip with my students in 1989, we (all eight of us) had walked up to Skyline to see the sunset. As we sat there in the growing darkness, a full moon was rising over the La Sal Mountains. It was a stunning sight. 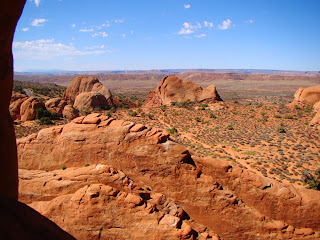 We made a short stop at the Fiery Furnace. I haven't had a chance to wander through this part of the park. Apparently it is an easy place to get lost...one needs a permit or a ranger guide to explore it! 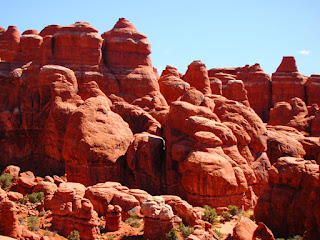 We took one more long look at the La Sal Mountains, and worked our way out of the park and onto the highway. We had some miles to go...we were headed to Capitol Reef National Park. More in the next post! 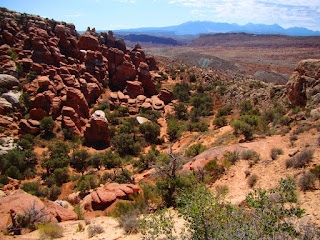 You should definitely return and take a tour through the Fiery Furnace. It's the most interesting, and cool, place in the park! I was fortunate to visit several times before NPS charged a fee for guided tours here. I led friends and family through this beautiful area on our own. Now it's an expensive option but well worth the cost.