Bizarro Rocks Day and a Roadrunner 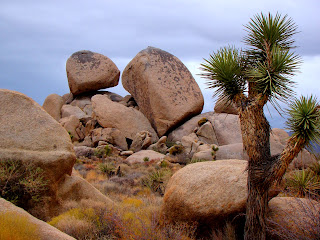 We were on the road this weekend, attending the fall meeting of the Far Western Section of the National Association of Geoscience Teachers. When geologist-teachers get together, we may talk about teaching, but we make sure our activities revolve around geology. We explore.

The sponsor of our meeting was Copper Mountain College, which serves the towns of Yucca Valley and Twentynine Palms. The towns are right next to Joshua Tree National Park which sits astride the boundary between the Mojave and Sonoran Deserts in Southern California. One group explored the scarps produced by the 1992 Landers Earthquake, a 7.6 temblor that produced a prominent scarp that is still visible today. The other trip was a tour of a park named for an odd tree, but whose other distinction is the bizarro rocks it has. Joshua Tree is a showcase for plutonic processes, with thousands of acres of weirdly weathered granitic boulders. 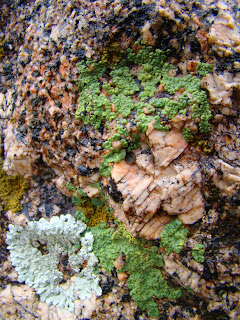 This is a brief post before I hit the long road home, but here are a smattering of photos of my favorite outcrops. They include the very colorful lichens I found in sheltered spots. Lichens are an entire ecosystem of lifeforms in miniature, a symbiotic relationship between algae and fungi. 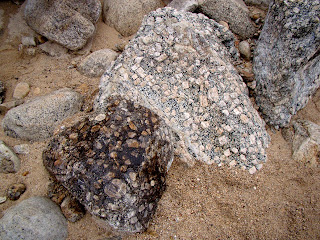 And then there was the Triassic megacrystic Twentynine Palms quartz monzonite. I've seen plenty of porphyritic granitic rocks before, but a canyon filled with giant boulders of this stuff was just extraordinary. 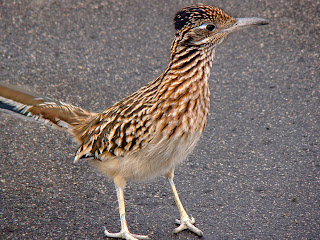 I could swear I heard a little "beep-beep", and there it was, a little roadrunner wondering what we were up to. More pics later!
Posted by Garry Hayes at 9:35 AM