A Soggy Day in Joshua Tree National Park: On the road with the NAGT 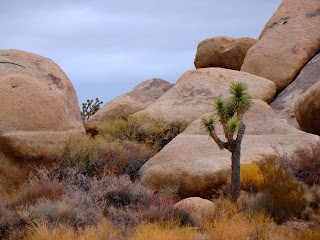 I spent the last weekend geotripping in Joshua Tree National Park with fellow members of the Far Western Section of the National Association of Geoscience Teachers. We hold these meetings twice a year at locations throughout California, Nevada and Hawaii. They are a great way to share teaching ideas and to collect samples and photos of some of the most spectacular scenery on the planet.

Part of our trip was an exploration of the Geology Road Tour in the middle of the park. The road is an unpaved track that is recommended for four-wheel drive vehicles. We would try to see if that was true on a rainy day! 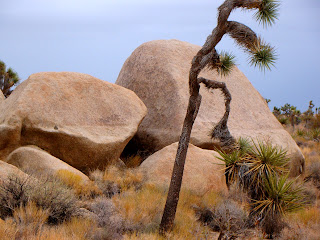 It was only sprinkling at first, as we crossed the Queen Valley pediment. Here and there inselbergs rose from the flat valley floor. These 'islands' of rocks that are remnants of mountain ridges that eroded away long ago.

The process of erosion continues into the present day. Can you see the horizontal scars across the boulders in the pictures above and below? These are areas of intense chemical weathering that formed when the soil levels were about 6-7 feet higher than today. The soils have eroded away within the last 20,000 years or so. 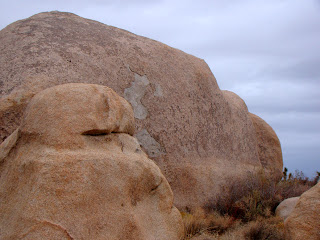 Another interesting form of erosion on these granite boulders is the development of tafoni, the hollows and honeycomb pits that occur on some boulders. The origin of the pits is somewhat unclear, but is no doubt a phenomenon of chemical weathering, possibly when the rock was still buried in the soil. 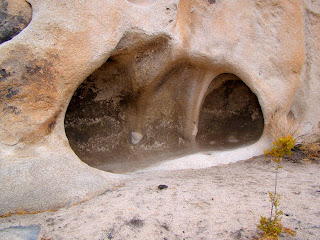 The hollow above was big enough to sit in. Others have had the idea of using the hole for shelter, as there was a grinding hole in the floor of the shallow cave. I also noticed a lot of charcoal in the soil at the site, meaning that the site was also utilized as a campsite by the local Native Americans.

We passed Malapai Hill, a 400 foot high basaltic intrusion. The volcanism resulted from decompression and partial melting of mantle material during a "reorganization" of the crust of southern California as the San Andreas fault system was taking shape. We didn't have time to check it out, but a climb of the hill reveals some nice examples of columnar jointing and fragments of mantle materials in the basalt.
We dropped down into Pleasant Valley, although with the building storm it was looking less and less pleasant by the moment. The abrupt valley wall marks the trace of the Blue Cut fault, a left lateral strike-slip fault that trends eastward through the park. 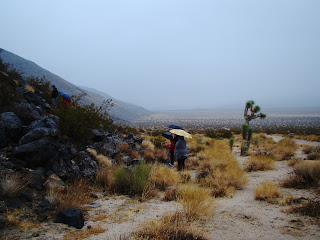 We stopped for a look at the Gold Coin Mine (not much equipment left), and searched for a few petroglyphs on the dark metamorphic rocks at the mine site. 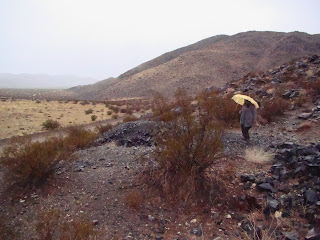 At the contact with the granite, I saw a very nice example of a xenolith ('alien stone'), a piece of older rock that was incorporated into the granite when it was still molten. The xenolith was more resistant to erosion, and now stands out. 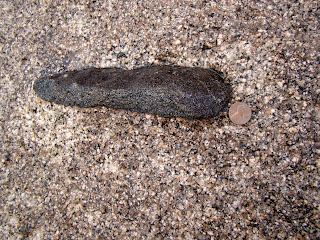 The weather was getting nastier by the second. The road crossed a playa surface in the center of Pleasant Valley. After the first eight cars passed through, the surface had become 'unstable', for lack of a better term. For the first time in five years of driving my Subaru, I went fishtailing on a road. My car has been stable on all manner of icy and snowy surfaces, but this was...fun. When we left two hours later, other cars were driving down the one way road. I wonder how they fared. 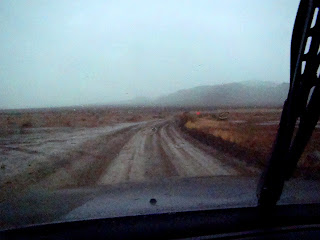 At the other end of the valley we found some of the most interesting rocks, a series of aplite dikes cutting across the Proterozoic Pinto Gneiss. These rocks are part of a complex that includes the oldest rocks in California (and part of an extensive belt of mountains that once extended across the southern United States). 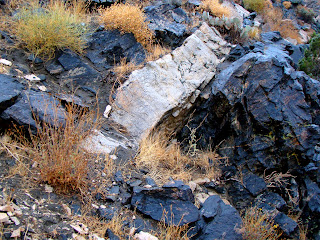 The rocks have been intricately folded and intruded by small granite veins. The complex chemical interactions have resulted in mineralization, leading many miners to seek out valuable ores in these rocks, mostly without success. 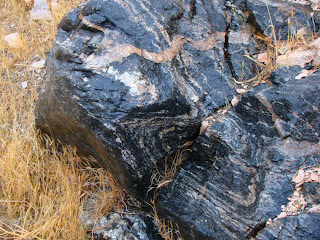 We continued around the one-way loop, on not too unreasonable roads while the rain continued to pour down on us. Luckily the playa surface did not extend to the other end of the loop, and we had no problems crossing the valley. 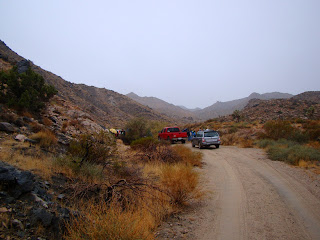 The view across the valley was interesting...our road out could be seen meandering up the alluvial slope. The inselbergs from the first part of the road tour can be seen on the skyline through the falling rain. 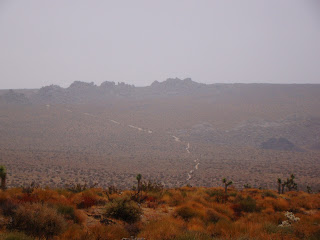 We made it back to the paved highway without incident, but the trip was cut a bit short because our last destination was Key's View. On a normal desert day, the view is incredible, looking across the Coachella Valley to Salton Sea, the San Andreas fault, and the San Jacinto Mountains. But not on this particular afternoon. The 30% chance of showers had turned into a full-fledged storm, so we headed back to town.

A trip spoiled by rain? Absolutely not. There is nothing quite like the sights and smells of a rainstorm in the desert. It was a great day!
Posted by Garry Hayes at 10:51 AM

It is sad but true that these days, "a normal desert day" in the Coachella Valley includes air pollution. Some of the air pollution blows in from L.A., some forms right there.

The Salton Sea is often not visible...

But the view from Key's View is still great!

Good view from your blog, it can increased our knowledge anyway