Hey! It's not my fault! It's San Andreas' fault...A Creepy Story

Quick, what's the difference between the pictures above and below? Well, OK, besides the growth of vegetation and the passage of 50 years?
If that drainage culvert looks like it has moved several feet in the last fifty years, you would be right. It was built right over the San Andreas fault, and in this part of California the San Andreas creeps a little bit each year (this is a good thing; this part of the fault doesn't build up stress, so it doesn't produce large earthquakes).

The drainage culvert is a famous locality that is visited by hundreds of geology students every year. It is located at a winery about eight miles south of the town of Hollister in the central California Coast Ranges. That's what we were up to yesterday, exploring the San Andreas and Calaveras fault zones with my geology students.

As I recall the story, the winery was first constructed in the 1800's, but for some inexplicable reason, it fell apart. It was rebuilt and then fell apart again, and then was constructed once again at the present location in 1948. When the building started showing signs of stress again, an investigation in the late 1950s led to the conclusion that it had been built on the San Andreas fault, and that the fault was moving around 0.5 inches per year. 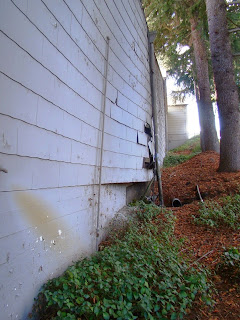 As can be seen in the picture above, the building is suffering serious damage again. We have been coming here on field trips for twenty years, and something different can be seen every year as new patches, repairs, and repaved roads can be seen. But in all those years, there was something we had never done before...we had never gone inside. By a quirk of scheduling, we arrived earlier in the day, and stumbled onto a wine tasting event. We headed inside to have a look around (note to my dean: we did not stumble out...no one went wine tasting in our group!). The damage inside actually looked worse than what we could see on the exterior. 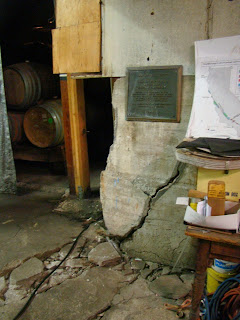 It's not like they don't know the building is on the San Andreas...that bronze plaque on the wall in the picture above is a 1965 designation of the site as a Registered Natural Landmark, and there is a map of the San Andreas fault in the poster to the right. 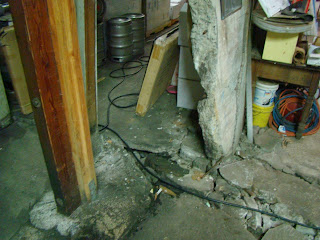 The wood post on the left was once even with the concrete wall on the right. The concrete has moved to the right, making the San Andreas fault a right lateral strike slip fault. I've outlined the sense of motion in the picture below. 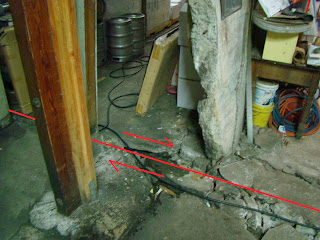 I'm wondering if any of the structural geologists out there can make sense of the fracture patterns of the the concrete on the floor in the picture below?  It looks to me like there might be some conjugate fractures and rotation among some of the chunks.  I appreciate that the owners seem not to have fixed that part of the floor (I wonder if that was a stipulation of being declared a national landmark?) 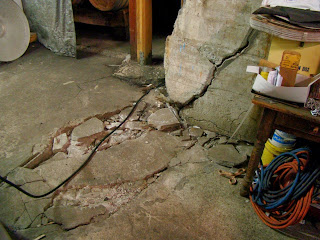 The north wall has some serious warping problems (below). The doorway is nearly impassable as the wall in the foreground is shifting more and more to the left. 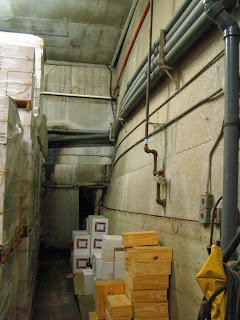 I've written about this trip a few times. The point where the San Andreas fault crosses Highway 25 that showed clear signs of fracturing on our trip last year (blogged here) has been repaved, so we'll keep an eye on it for changes over the next few years.

It's easier than you might think to see the San Andreas and Calaveras faults for yourself. There are several good road guides in books and online. An excellent one by the U.S. Geological Survey can be accessed here:  http://pubs.usgs.gov/bul/b2188/b2188ch6.pdf

There were some pretty sights at Pinnacles National Monument. More in the next post!

I think visiting a winery to see excellent examples of active faults would lead into some scientific sampling for those old enough to imbibe. Might make it easier to walk in that breaking building.

It's cool to see the first two photos of a post and be able to say, I've been there!

In my case it was also a class field trip, but a small class, and we went fairly late in the year after they'd finished dealing with the harvest. With nothing better to do on their part(and the suspicion, on my part, that our professor is a regular customer) they let us wander inside.

No tasting, but some fascinating building damage. In retrospect it was a really lousy place to build a winery.

As always Garry an enjoyable read and the photos as per usual fantastic!
Sorry to have missed this one. I do love a good fault