Vagabonding across the 39th Parallel - A Problem with Vagabonding: Yellow Line Fever 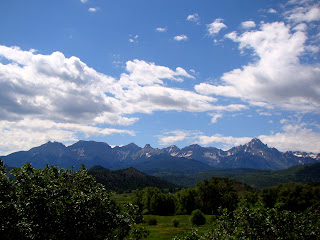 The San Juan Mountains of southwestern Colorado may be the second most beautiful mountain range in world (sorry Colorado, but the Sierra Nevada has my heart and soul!). We were on the homeward road of our long journey last July vagabonding across the 39th parallel, and after the previous day of exploration at Black Canyon of the Gunnison, we found ourselves encamped at a KOA in Ouray at the foot of the spectacular mountain range.

Our rules for the road were to not plan too many days ahead, seek out places we had never been to previously, and stop for pictures whenever the road demanded pictures. This road philosophy had worked out surprisingly well so far, but we were about to discover the limitations of our plan.

The previous evening should have clued us in; we drove up to the KOA, a very pleasant place I had camped at before, only to find that they were full. It was after 9:00 PM, and we really had nowhere else to go, so the proprietors allowed us to squeeze, literally, into a small space with the motorcycles. There were a lot of them, and the drunken conversations around us dragged on into the early hours of the morning. Sunrise always brings new hope, but this particular morning the sunrise was accompanied by the staccato roar of Harley Hogs. 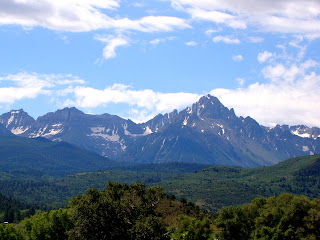 So there we stood at the base of the San Juan Mountains, the stunningly gorgeous spires calling out to us, but our rules were our rules: see something new. I've been through the San Juans quite a few times, but I had never been on highways 50, 62, 145, 90, 46 and 191 to Moab, Utah, except for that last part on 191, so we set out to discover this new territory.

We had just crossed the Dallas Divide and were headed down the canyon when we discovered Yellow Line Fever. White line fever is that hypnotic state sometimes achieved by drivers who've been on the road too long. It usually involves trucks going too far, too fast, with disastrous results. Our yellow line fever was caused by driving waaay too slow, following a truck painting the yellow stripes on the highway along a narrow canyon that had no pull-outs for what seemed like miles. Our meandering vagabonding demeanour was evaporating fast. We had tried to avoid having a schedule, but we were fast falling behind that schedule that we didn't exactly have. There was a lot of barren countryside ahead of us. In the afternoon we made our way into the long Paradox Valley, and the road stretched out ahead of us, and it was beautiful in its own way, but we were tired, and for once we wanted to just get somewhere. I didn't stop for many pictures, and in fact I was having trouble staying awake on the long straight stretches. 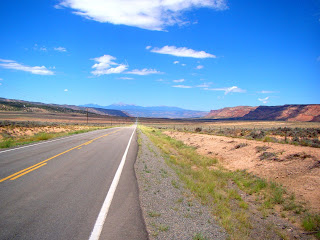 In the distance, the La Sal Mountains dominated the skyline. The peaks are exposures of laccolithic intrusions, essentially mushroom-shaped plutons of diorite and related igneous rocks. They are beautiful, but we drove a long time, and they hardly seemed any closer. 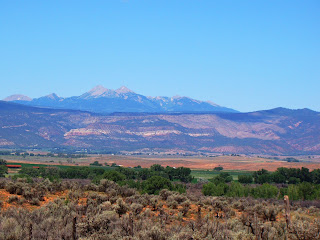 Some roads are lonely, and their beauty is related to their remoteness. Other roads give one a sense of a used up land. We passed village after village with boarded up windows and weathered signs. This was once uranium mining country, but the uranium boom ended decades ago and there aren't many jobs to keep the young people around. There were ranches here and there, but not much else.

Was it a bad day? No day is completely bad when you are on the road. It was a day a bit less spectacular than others, but we learned what there was to see in the blank spot on the map in the Utah-Colorado borderlands. There was a favorite moment: we discovered the town of Bedrock! We couldn't find Fred or Wilma or Dino, but there was the sign... 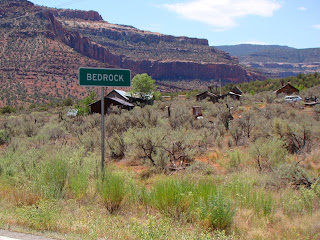 We reached Highway 191, and we were reminded why we were out here. Moab, Utah lies at the epicenter of some of the most glorious scenery on the planet. Our day ended on a high note...we were next to Arches National Park! 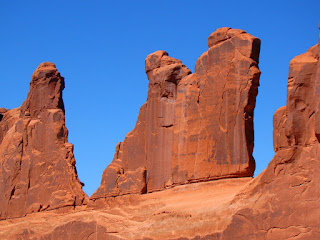 Every road trip has a few glitches and this one you've been pretty darn lucky. Look forward to see Arches through your lens as I didn't make it there this fall.