Wandering Around Inside a Volcano: Exploring Pinnacles National Monument 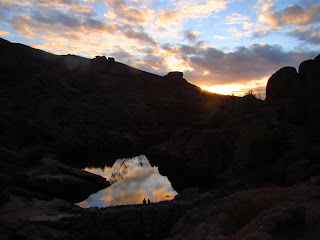 Pinnacles National Monument in the California Coast Ranges is one of the most beautiful parks no one has heard of. Far from any major population centers, it just doesn't get the visitation or attention of the better-known parks of the Sierra Nevada or the California coast. It's an interesting place to hike on the basis of scenery alone, but it also has an extraordinary geological story. To explore the park is to wander about inside a volcano. 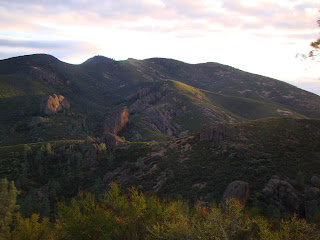 The Pinnacles volcano is a composite of five or so rhyolite cones that were erupted around 23 million years ago. The flanks of the volcano were coated with rhyolite breccia from mudflows as well as rhyolite lava flows, pumice, and a bit of andesite and dacite. The intricately eroded towers contrast strongly with the more muted topography of other parts of the Coast Ranges.

The park was established in 1908 for the unique scenery, but in the 1970s an extraordinary discovery was made: half the volcano was missing, and the missing half was on the other side of the San Andreas fault...195 miles away in Southern California! Pinnacles turned out to be an important piercing point of the fault and is critical in understanding the nature of the San Andreas fault system. I discussed this in an earlier post that included a map showing the offset (click here to see it). 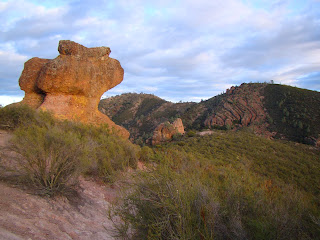 The High Peaks are mostly composed of the breccia unit. A network of trails surround the ridge and cross over the summit. In places, steps are carved directly out of the rock, and a few cliffs required the use of bridges which were more or less nailed to the cliff. 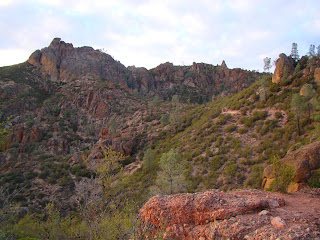 On our recent field class, I gave the students a bit of free time to explore the talus caves (surprisingly long and dark), and took off for the High Peaks Trail to catch a bit of the sunset. The previous day a storm had come through, and another was due in a few hours. In the meantime, the sky was full of puffy clouds that nicely caught the rays of the setting sun. 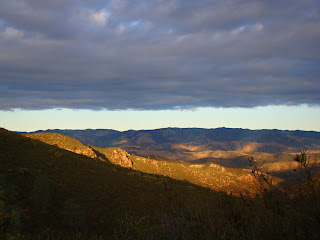 I covered the four miles in an hour and a half (gotta get back to the gym, huff...puff...), but I had a great time walking through the inside of the volcano. I lingered a bit at the small reservoir looking at the reflections, and then fairly ran down the trail to meet my waiting students. 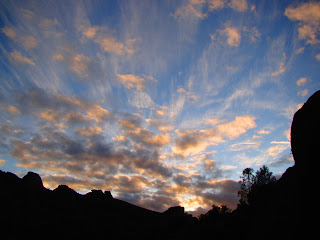 The first image looks like an arch with the sunset showing through.

Four miles in an hour and a half, with stops for taking pictures... That's not bad at all!